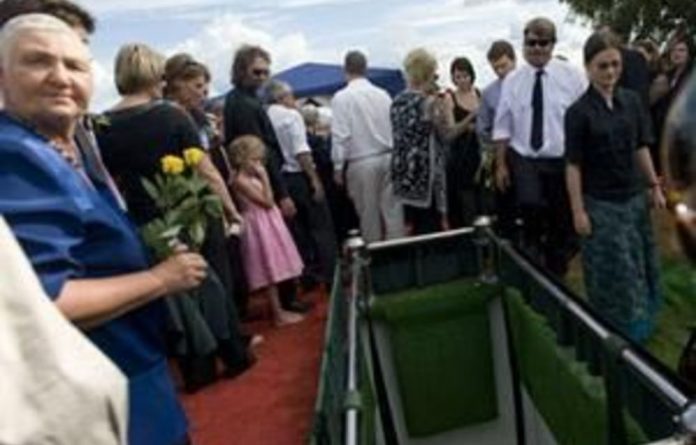 Rumours surrounding the death of Eugene Terre’Blanche continued to swirl on Sunday as a media report said sodomy “sparked the murder” of the AWB leader.

The Sunday Times reported that a lawyer acting for one of the farm workers accused of killing Terre’Blanche claims the AWB leader tried to sodomise him.

“My instructions from my client are that there was some sodomy going on and it sparked the murder of Mr Terre Blanche. This is going to form part of our defence during trial,” the paper quoted Puna Moroko, attorney for 28-year-old Chris Mahlangu, as saying.

Mahlangu is accused along with a 15-year-old boy — who cannot be named — of the murder of Terre’Blanche.

Police on Saturday denied that a used condom was found at the murder scene.

“It is a false allegation,” North West police spokesperson Captain Adele Myburgh said, responding to an earlier report in the Saturday Star.

Myburgh said police had no intention of “misleading” anyone about any facts in the case.

“I’m prepared to put my neck in a guillotine and you can have a go at it if I have been lying.”

She also said she had heard reports that the post mortem report had been leaked to the media.

Moroko told the Sunday Times his client’s defence would be that the attack on Terre’Blanche was triggered by sodomy. The paper said Moroko also claimed that Terre’Blanche first tried to get the accused drunk before he allegedly tried to have sex with “one or both of them”.

The suspects are expected to appear in the Ventersdorp Magistrate’s Court on Wednesday for a formal bail application.