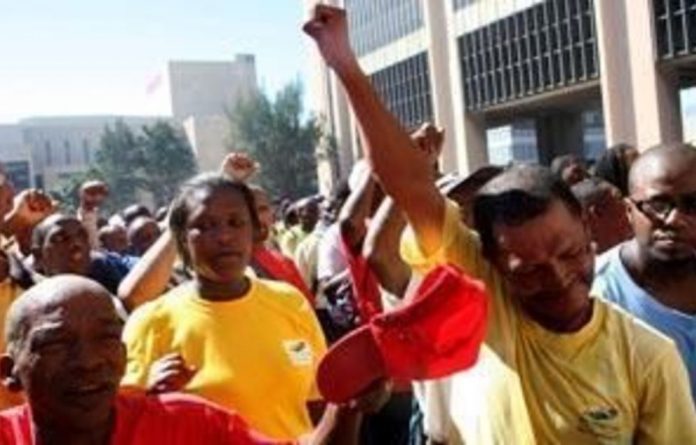 Municipal services will be restored as soon as possible after a pay strike was resolved on Wednesday, the South African Local Government Association (Salga) said.

“We will do everything possible to restore service delivery in the shortest possible time,” chairperson Amos Masondo told reporters in Pretoria.

“We regret all the inconvenience that people have had to suffer during the strike.”

“There are structures in place to facilitate a message to workers that the strike is over and they must report to work by Thursday.”

Molope said the agreement was a “good one” because municipalities will no longer use external legal representation in disciplinary hearings and workers will be paid market-related salaries backdated to November last year.

“For the first time the scale will be in balance in hearing procedures — shop stewards were unable to represent workers fully as they were facing lawyers … now the scale is balanced,” he said, adding that the union believed that municipal managers were competent enough to conduct disciplinary hearings.

The agreement will be implemented on July 1 this year.

Under the agreement, workers in the same municipality will be paid similar salaries for the same jobs.

“Many municipalities, such as Ventersdorp or Musina, are in dire financial straits and can barely survive. In this regard no amount of pressure can draw water from a stone. All of us have a responsibility that we do not penalise residents and make them carry extra burden of unrealistic demands,” Masondo said.

Concern over finances
The Independent Municipal and Allied Trade Union (Imatu) said the matter was resolved with their intervention.

“Imatu is pleased to announce that with our intervention, the South African Local Government Bargaining Council parties have reached a settlement in the ongoing salary dispute between Samwu and Salga,” it said earlier.

The agreement will run until June 2012.

Samwu members went on strike last Monday and had vowed to keep it up until their demands were met over the seven-year dispute.

“Although I am glad that salary scales will take into consideration the grading of municipalities, I am very concerned that the backdated increases could severely affect the finances of municipalities in Gauteng,” said Fred Nel, DA’s Gauteng spokesperson on local government.

“All municipalities in Gauteng are struggling financially and now they have to pay a significant amount in backdated salary increases that they did not budget for. This will impact on service-delivery levels in the province as operational costs relating to salaries will increase, impacting once again on capital and maintenance budgets,” he said.

Nel said the DA was of the opinion that salary increases should have been implemented from July 1, when municipal financial years commenced, and a backdating of salary increases sets a precedent that could affect municipalities severely in future.

He said Salga had let municipalities down and created a dangerous precedent by reaching this agreement with unions. — Sapa