Car given to Vavi’s sidekick 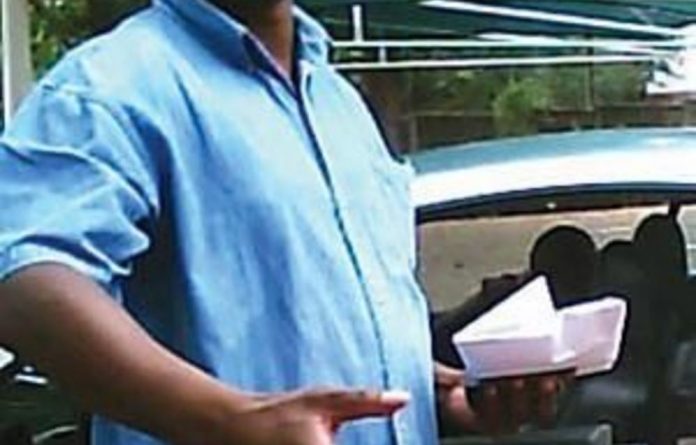 Noluthando Vavi, the wife of Zwelinzima Vavi, is not the only person close to the Cosatu general secretary to get dubious benefits from the financial services firm, SA Quantum.

Three weeks ago the M&G reported that Veon Bock, SA Quantum’s chief executive, tried to bribe the newspaper to stop it from publishing details of the firm’s R60 000 a month contract with Noluthando Vavi.

According to Bock, she was engaged to market its products, which include pension fund administration and other employee benefit services, to pension fund trustees who are officials of Cosatu’s affiliate unions.

The luxury car given to Mahlangu is an even clearer attempt to buy influence and the timing suggests the deal may have been negotiated by the same person — SA Quantum’s now-deceased founder, Abe Nduru.

From time to time Mahlangu interacts with the Financial Services Board and convenes employee trustee conferences at which he advises labour trustees about changes in the market and Cosatu resolutions on pension fund matters.

Currently the federation is campaigning for more direct control over the billions invested in pensions on the workers’ behalf.

Mahlangu vehemently denied that SA Quantum paid for his car.

“It’s not true that SA Quantum bought me an Audi A4 last year. My vehicle was financed through a registered financial institution,” he said.

But he would not name the financial institution or provide proof of it.

“We have no records of any payments made by SA Quantum to Audi Hatfield.”

But documents obtained by the M&G contradict both these denials. The transport department’s eNaTIS database shows that Mahlangu’s car was not financed by a bank and he was registered as the owner from the day he collected it from the dealer.

Bank records show that on November 12 last year SA Quantum transferred two amounts — R46 000 and R300 000 — to Audi Hatfield in Pretoria for Mahlangu’s Audi A4. Mahlangu collected it and was registered as the vehicle’s owner on November 20, eight days later.

Two staffers at Audi Hatfield verified this and that the money paid by SA Quantum was for Mahlangu’s car.

Two days after the payment was made, on November 14, Nduru died in an accident; and the day after Mahlangu collected the car, Vavi made a speech at Nduru’s funeral lavishly praising his role in securing pension benefits for workers. Vavi noted Nduru’s association with Bock, calling him “a fighter who did not know the meaning of taking risk”.

Cosatu spokesperson Patrick Craven said Mahlangu had not declared the gift of a car to Cosatu and it was “debatable” whether the gift would be a conflict of interest.

“Even though SAQ do not deal directly with Cosatu or its affiliates, Jan Mahlangu is a retirement fund policy coordinator.

“What Cosatu needs to find out is whether, as a result of the alleged gift, he in any way acted in a manner that benefited a single player in the form of SA Quantum, or in a manner that is prejudicial or affects its integrity,” said Craven.

He said SA Quantum was a small, black-owned firm that controlled the smallest fraction of the retirement fund industry.

“As a matter of policy, Cosatu promotes broad-based black economic empowerment.
“The tricky question is whether Jan Mahlangu, in pursuance of this policy, acted unprofessionally and in a manner that compromises his and Cosatu’s integrity.

“Cosatu will have a discussion with him to ascertain all these facts. Should it be established that he acted immorally, action will be taken,” said Craven.
Meanwhile, anti-corruption specialists at the commercial crime unit of the Hawks are investigating possible charges of corruption arising from Bock’s attempt to bribe the M&G, which was captured on a hidden video camera.

Zwelinzima Vavi has denied any impropriety in his wife’s dealing’s with SA Quantum.

Toxic misconduct claims rock chemicals union bigwig
The general secretary of Cosatu’s chemicals union (Ceppwawu) is facing the axe after the union’s national executive committee accused him of using his position to secure a multimillion-rand contract with Sasol for his wife.

The Mail & Guardian has established that, at its national executive committee meeting on April 9, Ceppwawu decided to charge Simon Mofokeng on several misconduct allegations, including the alleged use of his union position to negotiate a business deal for his wife at Sasol Mining.

Sasol Mining has contracted Maureen Mofokeng’s company, Khotso-Batho Mining Services, to provide all its above-ground coal handling, which includes dead and live stockpiles and building and managing the discard dump and the slimes dam.
Sasol’s group communications manager, Jacqui O’Sullivan, said the company’s association with Khotso-Batho began in 2000 with the awarding of the first contract. The contract was renewed in 2005. However, O’Sullivan refused to disclose the value of the contract between Khotso-Batho Mining Services and Sasol Mining, saying this was confidential information between Sasol and its suppliers.

O’Sullivan denied the contract constituted a conflict of interest. ‘Sasol entered into an agreement with this supplier based on commercial considerations. It should be noted that Sasol’s association with the company predates later changes at director level, including the appointment of Ms Mofokeng.

However, Sasol’s only consideration in working with the company has remained purely those relating to commercial factors,” said O’Sullivan.

Ceppwawu insiders said the company is paid R500 000 a month.

Ceppwawu organises workers at Sasol. In addition, through its investment arm, Ceppwawu Investments (CI), it holds shares worth more than R100-million in Sasol.

Simon Mofokeng is a director of CI, which controls assets of more than R500-million. The union has charged him with gross misconduct for serving on the CI board since 2009 without the NEC’s permission and accuses him of defying its decision that the union should investigate alleged corruption at CI.

In recent months Ceppwawu leaders have been engaged in a tug-of-war with Letsema Investments, which holds a 27,5% share in CI. At the centre of the tussle is the involvement of Barloworld Logistics Africa chief executive Isaac Shongwe, whom the union accuses of abusing his position as a CI trustee to cash in on its empowerment deals.

CI entered into a number of lucrative empowerment deals through special-purpose vehicles, including one with Aspen Pharmacare. It has several management agreements with Letsema Investments, entitling the latter to a share of any realisable equity in CI. Although CI controls assets worth more than R500-million, Ceppwawu leaders say that through Letsema, only Shongwe and Thomas enjoy the investment proceeds.

Last year CI paid Letsema R45-million in management fees, despite union leaders’ objections. The union was paid as little as R1-million. Mofokeng did not respond to the M&G‘s request for comment.

The chickens have finally come home to roost: if we do not end the looting, it will end us
Read more
Coronavirus

After months of little action, the planned nationwide stayaway may not be an impressive show of force by the trade union movement
Read more
Opinion