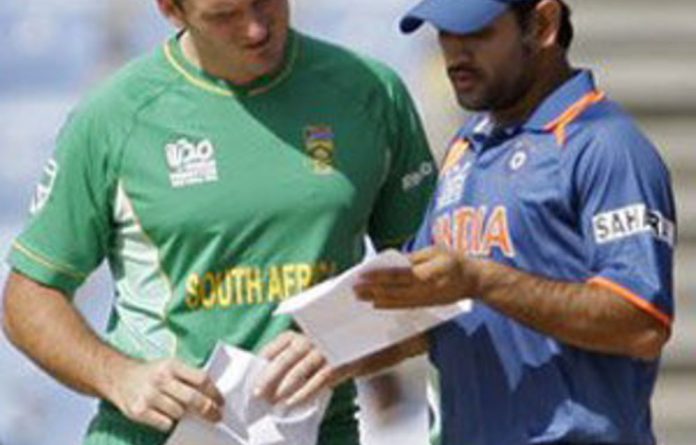 Suresh Raina became only the third man to make a Twenty20 international century as India beat South Africa by 14 runs at the Beausejour Stadium here on Sunday.

Victory, which saw India into the second round Super Eights after their seven-wicket win over Afghanistan on Saturday, was built on Raina’s 101 out of a total of 186 for five.

Only West Indies’ Chris Gayle and New Zealand’s Brendon McCullum had previously made centuries at this level.

Raina had an escape on five when he was caught off a Morne Morkel no-ball.

It was an expensive error by the fast bowler, with left-hander Raina striking five sixes and nine fours in a blistering assault as he reached his century off 59 balls.

Together with Yuvraj Singh (37) he shared a stand of 88 in 10 overs after the pair came together with India 32 for two in the sixth over after they’d lost the toss.

South Africa captain Graeme Smith had promised his side would be flexible when it came to their openers but few foresaw the skipper dropping himself down to number three.

Jacques Kallis, who opened in Smith’s place, was nearly out for a second ball nought when a diving Yusuf Pathan at backward point just failed to hold on to a catch off the bowling of Harbhajan Singh.

Kallis, after the early loss of Loots Bosman, went on to complete a 45-ball 50 with three fours.

The experienced batsman then tried to keep South Africa on course by slog-sweeping Harbhajan for two successive sixes in the 15th over.

But a stand of 97 in 11 overs was ended when Smith was run out by Praveen Kumar’s throw to wicketkeeper and India captain MS Dhoni.

Then 118 for two became 128 for three when Kallis fell on 73 after driving leg-spinner Piyush Chawla straight to Ravindra Jadeja in the deep.

South Africa though kept swinging and got the target down to 24 off the last over, bowled by Ashish Nehra and the left-arm quick conceded just nine.

India accelerated in the ninth over when Yuvraj swept spinner Roelof van der Merwe for the first six of the match and, two balls later, Raina lofted all-rounder Kallis high over wide long-on.

India took 25 runs off Kleinveldt’s last over, the 18th, with Yusuf Pathan hitting the first ball for six and then taking a single.

Raina then struck three fours in a row, over long-on, through extra-cover and straight down the ground, before the batsman completed the over with a majestic six, struck off one knee and high over long-off.

Come the last over, Raina was on 95 and Dhoni was facing. But when he got on strike, for the third ball, Raina wasted little time in completing his 100 with a six over midwicket off Albie Morkel before getting out next ball.

This was only the 23-year-old Raina’s 13th Twenty20 international and his score easily eclipsed his previous best of 61 not out against New Zealand in Christchurch last year.

Dhoni, whose side beat Afghanistan here on Saturday, ended the innings with a six as India scored a mammoth 75 runs off the last five overs.

South Africa complete their group programme against Afghanistan in Barbados on May 5. – AFP

Why is that it can seem as if the drop goal has disappeared from sight between World Cups?
Read more
Sport

A win for the hosts will guarantee them a semifinal place, but victory for the Kiwi's could allow Pakistan to make the last four
Read more
Sport

Arsene Wenger insisted he was still the right man to turn around Arsenal's fortunes after a fourth straight defeat in all competitions.
Read more
Sport

England pulls plug on Pietersen’s hopes for a return

South Africa-born batsman Kevin Pietersen's hopes of a recall to the national team were in tatters due to "lack of trust" in the player.
Read more
Advertising
Continue to the category
Coronavirus