Carlos, and Benni, ready to cut the fat 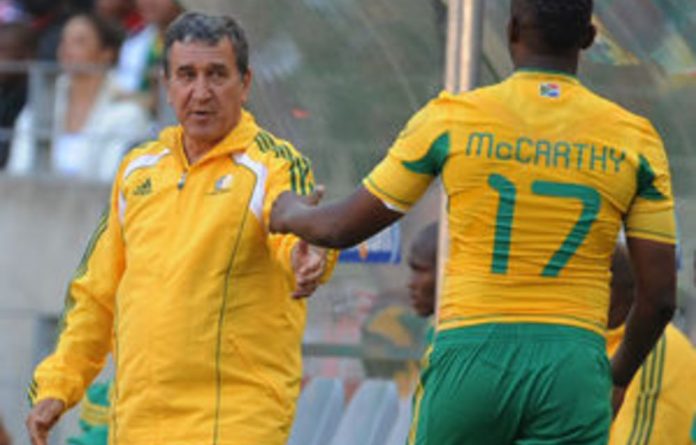 “It is truly here” was the remark of one of the journalists after Bafana Bafana and Everton midfielder Steven Pienaar gave a press conference on Wednesday. News had just filtered through that the first team to arrive in the country for the World Cup, Australia, was only hours from landing at OR Tambo international airport.

The Aussies jetted in later in the evening, but it was the arrival of Brazil — the number one ranked team in the world — that set tongues wagging about the tournament. Real Madrid star Kaka and the other Samba Kings’ galaxy of stars touched down on Thursday morning, creating a euphoric atmosphere among the legions of football fans in the country.

Though the fans are excited at the prospect of having 20 of the 32 participating nations landing in the country over the next 12 days, tension is building in the Bafana camp.

Thus far, slimming down Bafana Bafana has been routine for national team coach Carlos Alberto Parreira — especially with the programme of rigorous gym work and scientific oversight instituted by fitness coach Francesco Gonzalez that has seen the team develop physically over the past few months.

But, between Friday and the final whistle of South Africa’s friendly against Guatemala at Polokwane’s Peter Mokaba stadium on Monday, Parreira will be tasked with another type of fat-trimming exercise: cutting down his squad from 30 players to the 23 required by Fifa for the World Cup finals by June 1.

Perhaps not as difficult as convincing Benni “Five Bellies” McCarthy not to have another jelly doughnut, but a tough task nonetheless as it appears likely that Parreira will sacrifice at least one, if not two, of his more seasoned campaigners.

Matthew Booth, MacBeth Sibaya and McCarthy are likely to be wondering where the executioner’s axe will fall as Parreira mulls over the balance of defenders, midfielders and strikers in his squad.

No easy decisions
Some of the decisions will be easy: Andile Jali appears unlikely to have any further part to play in the squad after flying to the United States to have a recently detected heart condition monitored. Maccabi Netanya defender Bevan Fransman has been told to train at home, suggesting the only control he need bother about over the World Cup is the television remote.

Coming on in the second half of the Bulgaria match on Monday, Tsepo Masilela gave a storming lesson in attacking fullback play — something that Parreira has so far been unsuccessful in coaxing out of Lucas Thwala and Siboniso Gaxa. Masilela is likely to feature in the starting 11 with the equally attack-minded Bryce Moon on the opposite flank.

With Thwala and Gaxa likely to deputise for the aforementioned duo, Parreira has cover at fullback, making it likely that Mamelodi Sundowns’ Innocent Mdledle will be let go.

That leaves four more to cut. With three goalkeepers mandatory for the squad and Kaizer Chiefs’ Itumeleng Khune in sterling form, either Shuaib Walters of Maritzburg United or Rowen Fernandez, who has had little game time at Armenia Bielefeld, will be chopped. Our money is on the latter being dropped.

Three to go and one of them is likely to be Racing Genk’s Anele Ngcongca who did not feature in Thursday’s clash against Colombia, which Bafana won 2-1.

The last two spots to be vacated are likely to cause Parreira the biggest headache. But it is a painfully sweet one: much like waking up to a hang­over and an overabundance of nubiles in one’s bed.

The Brazilian-born coach will stick with his midfield configuration of a volante, or rudder, in front of his back four, flanked by two narrow midfielders intent on running and keeping defensive shape.

Golden Arrows’ Thunduyise Khuboni has flourished as the volante under Parreira’s careful guidance. His economy of movement, technique and positional sense have progressed rapidly and are vital to the team’s tempo, the swift change in the direction of their attacks and defensive solidity.

Fulham’s Kagiso Dikgacoi is another Parriera favourite and given that he has two weeks to bed into the squad is likely to start alongside Khuboni and the ever-impressive Siphiwe Tshabalala. It is, potentially, a barnstorming midfield combination, led by the impressive Pienaar.

There is an overabundance of defensive/hardworking midfielders in Parreira’s squad meaning that Lance Davids, who has not featured prominently in the series of friendlies played so far, is likely to be cut.

That leaves one more player whose heart will be broken. And therein lies the crunch. Supersport United’s Bongani Khumalo and Golden Arrows’ Siyabonga Sangweni have looked assured at the centre of defence and will compete to partner captain Aaron Mokoena there.

Booth is likely to squeeze into the squad as further central defensive cover meaning the painful cut is likely to happen in midfield or upfront.

Taking a gamble?
The choices? The hardworking Reneilwe Letsholonyane, who has had time to absorb and articulate Parreira’s vision and game plan, or Sibaya, who has played sporadically for Rubin Kazan and has only recently joined the squad?

Or what of Katlego Mphela and Bernard Parker? Both have looked anonymous at times in a Bafana shirt. Will either be sacrificed in a gamble on McCarthy?

Bafana has lacked goals and depending on McCarthy’s progress in the gym (and sauna, perhaps) and game time against Colombia, the Cape Town-born enfant terrible will in all likelihood make the squad.

But perhaps the sacrifice will be made in the attacking midfield position. Although Bafana’s narrowness would suggest they will need the option of width and pace in the latter stages of a match, especially if they are trailing, either Franklyn Cale or Siyabonga Nomvethe may go.

It’s difficult being scientific in these sorts of cases. So in a completely prejudiced guess — made before Bafana take on Colombia — we are going for Cale’s axing.