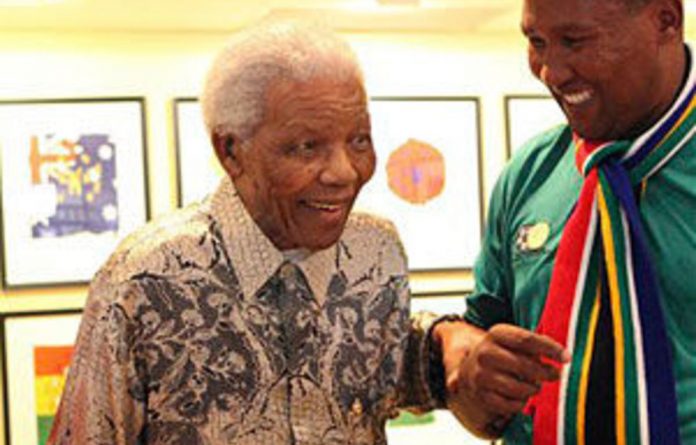 A grieving Nelson Mandela and his ex-wife, Winnie Madikizela-Mandela, mourned at the funeral of their great-granddaughter, Zenani Mandela, on Thursday after she was killed in a car accident on the eve of the Soccer World Cup.

Hundreds of mourners attended the funeral of 13-year-old Zenani, whose death just hours before the opening ceremony of the World Cup made the country pause from its festivities to mourn with the Mandela family.

Mandela entered through a rear door and walked slowly to a seat in the front row, with his wife, Graca Machel, at his side. The former president is 91 and in frail health, and his public appearances have become increasingly rare.

His former wife, Winnie (73), arrived separately, accompanied by their daughter, Zindzi. Winnie and Zindzi embraced as they arrived at the Methodist chapel and entered slowly, arm in arm.

An overflow tent was set up to accommodate the crowd at the funeral, which was held at Zenani’s school, St Stithian’s College, and followed a private burial service earlier on Thursday morning.

The service began with a slide show of pictures of her short life, including several shots of her and Mandela smiling together, as the Bill Withers soul classic, Lean on Me, played.

Refiloe Seakemela, a relative, read a message from Zenani’s mother, Zoleka Mandela, which she interrupted repeatedly to collect herself.

“You are my best friend. How do I learn how to do this from here. Are you warm where you are baby? Have you eaten, are you safe, and are thinking of me?”

Another relative, Dineo Seakamela, recalled her love of music.

“Zenani was extremely fond of music, she played the piano, and the saxophone. She was a member of the choir, the marimba band and the drumming band.

“She was a ray of sunshine in the lives of all who knew her and will continue to live on in the hearts of all the many who loved her.”

The accident occurred just two days after Zenani’s 13th birthday. She was travelling in a car that overturned on a central Johannesburg highway while returning from a World Cup concert the night before the kick-off.

Regret
The driver, 23-year-old Sizwe Mankazana, was close to the family but now faces charges of drunken driving and culpable homicide.

Madikizela-Mandela, her great-grandmother, was so devastated upon hearing the news that she was briefly taken to hospital and treated for shock.

The public was invited to grieve with the family in the chapel at St Stithian’s, where Zenani was in the sixth grade and a member of the choir.

Zenani was the daughter of Zoleka Mandela-Seakamela and Casey Moyo, and her grandmother is Zindzi Mandela, the former president’s daughter.

He had been expected in court last Friday, but his case was put off until July 26 — two weeks after the World Cup ends — to allow police further time to investigate.

“I deeply regret the loss of our little Zeni. I ask that your thoughts and prayers be with her family and friends during this very difficult time,” Mankazana said in a statement.

Nelson Mandela remains beloved in South Africa for leading the fight against the apartheid government, a struggle that kept him in prison for 27 years before his election in 1994 as the country’s first black president.

His private life has been marked by a long history of heartache.

One daughter died as an infant. An adult son died in a car accident while Mandela was in prison, and another died of an Aids-related illness in 2005. — AFP