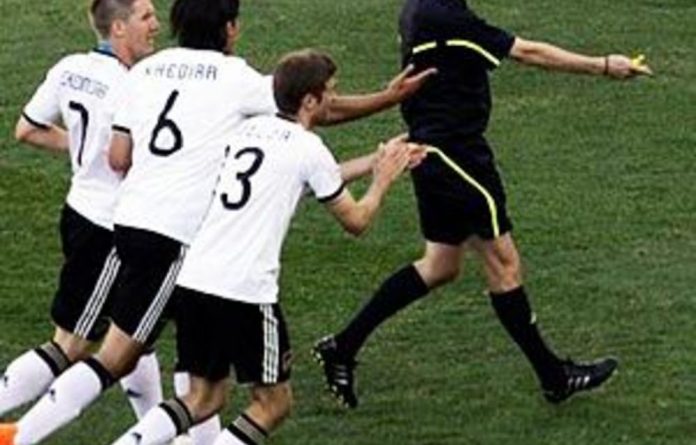 Serbia stunned Germany with a 1-0 win after Miroslav Klose was sent off and Lukas Podolski missed a penalty in a World Cup Group D clash on Friday.

Milan Jovanovic grabbed the winner in the 38th minute with Germany in disarray moments after striker Klose was sent off for a foul that landed him a second yellow card.

Germany should have equalised in the 61st when Nemanja Vidic needlessly handled in the area, but goalkeeper Vladimir Stojkovic dived to his left to save Podolski’s spot kick.

The result takes the shine off a young German side that came into the match high on confidence after hammering Australia 4-0 in their opener and gives World Cup newcomers Serbia a chance to reach the second round after they lost 1-0 to Ghana.

Germany still lead Group D with three points from two games, ahead of Ghana and Serbia, also on three, and Australia on none. Ghana and Australia meet on Saturday in their second game.

Until Klose’s dismissal, Germany had been in control of the match, playing with attacking flair, fast breaks and fluid movement off the ball that left Serbia on the back foot.

The three-time World Cup winners’ bright start saw them create a chance after three minutes when Sami Khedira found space and volleyed over after a neat cross by Thomas Mueller.

They kept up the pressure and came close again four minutes later, when Mueller’s dangerous cross was partially cleared by Vidic and volleyed just wide by Podolski.

First chance
The Serbs squandered their first chance after 12 minutes when Milos Ninkovic found himself with time and space but blasted Milos Krasic’s inch-perfect cross over the bar.

Mueller and Klose always looked threatening for Germany but the latter’s frustrations mounted after he missed chances and had a goal ruled out for offside on the half-hour mark.

The game was turned upside down seven minutes later when the German forward was given his marching orders after receiving a second booking for bringing down Milos Krasic.

With the Germans stunned, Serbia took full advantage and snatched the lead a minute later with a superb team effort that culminated in Jovanovic’s close-range strike.

Zdravko Kuzmanovic slid the ball into the path of Krasic, who delivered a delightful cross that was headed to the unmarked Jovanovic, who chested down and converted on the turn.

Germany quickly tried to level the score and burst forward, with Khedira seizing on Stojkovic’s punched clearance to unleash a fierce long-range shot that cannoned off the bar.

They came out fighting again after the break and Bastian Schweinsteiger twice went close with an impressive solo run and powerful strike from outside the box that stung the palms of Stojkovic.

Podolski almost equalised after 56 minutes when he chased Khedira’s long pass and struck the ball wide under threat from the onrushing Vidic.

The pressure paid off three minutes later when Germany were awarded a penalty for handball by Vidic but Podolski’s poorly struck spot-kick was turned away by Stojkovic, who was later named man of the match.

Serbia fought hard to protect their lead and could have had a second when Zigic’s header clipped the bar. — Reuters