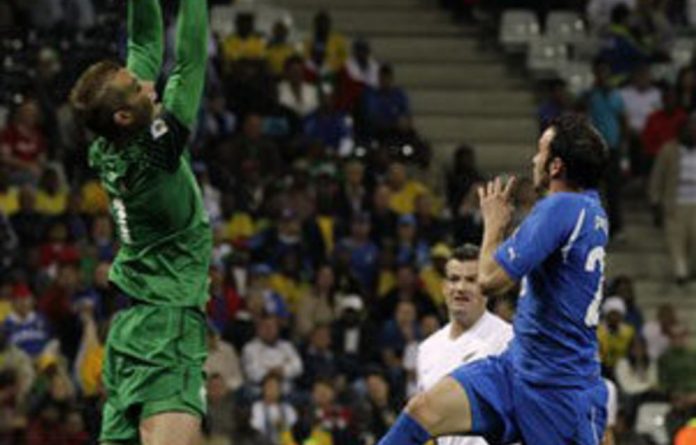 There was chaos in the French camp when players refused to train in protest at the expulsion of striker Nicolas Anelka for insulting his coach after their shock defeat to Mexico.

Coach Raymond Domenech had to break up a row on the pitch at their luxury base in Knysna and disgusted team director Jean-Louis Valentin said he was going home. “It’s a scandal,” he said, walking away. “I’m resigning … I’m going back to Paris.”

The French players went back to their bus.

In yet another shock result at the tournament, 78th-ranked New Zealand’s All Whites took an early lead against 2006 champions Italy before being pegged back to 1-1 in surely the greatest soccer result for a nation better known for rugby.

New Zealand fans danced in disbelief after the game.

Captain Ryan Nelsen praised his team’s “guts” but criticised the controversial penalty decision that put Italy back in it.

“It was a ridiculous call. It was a dodgy goal,” he said.

Paraguay cruise past Slovakia
In Bloemfontein, a solid-looking Paraguay won 2-0 thanks to a neat flick by Enrique Vera and a late shot from Cristian Riveros to leave them comfortably on track for the second round.

Latin American teams have lit up the early stages of the World Cup, with seven wins and three draws. The only defeat was among themselves when Chile beat Honduras.

After their two impressive wins, Argentina overtook Spain and Brazil on Sunday as British bookies’ favourites to win the trophy, confounding a widely-held opinion that maverick coach Diego Maradona would be the main impediment to their progress.

Should Argentina lift the trophy on July 11, it would be an incredible redemption for the charismatic Maradona, whose reputation as one of the world’s greatest players was soured for years with his drug problems and other off-field antics.

In another nasty turn of events off the field, Nigeria said midfielder Sani Kaita had been inundated with death threats via email after being sent off in the shock 2-1 loss to Greece.

“We consider it a very serious matter because this is a young man who is putting his best at the service of his country and football,” team spokesperson Peterside Idah said, adding that Nigeria’s government and Fifa had been informed.

For Africa, it has been one disappointment after another at the continent’s inaugural World Cup.

Cameroon out
Led by three-times African footballer of the year Samuel Eto’o and with a rich history including a 1990 quarterfinal appearance, Cameroon had been considered one of the best hopes to break Europe and South America’s grip on the World Cup.

But the West Africans’ 2-1 defeat to Denmark on Saturday night made them the first team eliminated though they have a meaningless Group E game left against Netherlands who, by contrast, were the first team to secure second round passage.

“This was a great opportunity to do something big but it wasn’t to be,” Eto’o said. “God is the only one who rules in this moment and he wanted it to turn out like this.”

Apart from the Dutch, the soccer powers of Europe have had a torrid time. There have been shock losses for Spain, France and Germany and uninspiring draws for England, Portugal and Italy.

Under Dunga, Brazil have swapped their famous “samba football” for a more disciplined approach and lost a few friends along the way. But Eriksson has nothing but praise for the man he managed as a 25-year-old at Fiorentina in 1988-89.

“He’s one of the best footballers I ever had,” he said.

African teams have only won one game so far this tournament.

Germany’s players are fighting boredom in a luxury resort surrounded by scorched fields and red dust. But if players are tempted to take a walk close to the swamp-like Hennops river running through the camp, they must beware.

“The iguanas, and they are quite big, can swing their tails and have been known to break several bones,” said manager Oliver Bierhoff. “Luckily nothing of that sort has happened.” – Reuters