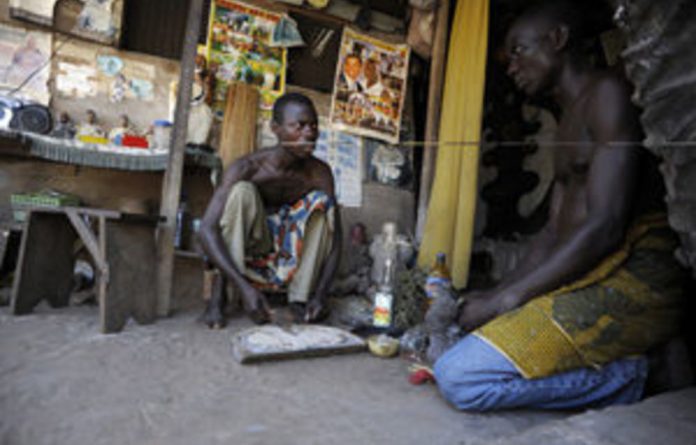 In 2009 Fifa held a seminar during which participating African teams were given the go ahead to use traditional doctors during the Soccer World Cup, provided doping products were not administered to the players. The Head of Fifa’s medical commission, Michel D’Hooghe, insisted that traditional medicine further contributes to the “players’ spiritual upliftment”.

Sangomas warmly welcomed the news at the Faraday marketplace in Johannesburg. Most of them see this as a long awaited recognition of their importance, for a Sangoma, in the South African context, is both a healer and a spiritual guide. “People come to us for in finding a job, maintaining their relationships, childbearing, or even winning soccer games,” said Maureen Ngcobo, a Sangoma based in the marketplace.

Displayed on different shelves at the Faraday marketplace are peculiar items including tree bark, roots, dried leaves, various powders as well as boa, python and hippopotamus oil. There are also bones and dried skins from snakes and panthers as well as carcasses of vultures and bats. These serve as ingredients in special potions known as ‘Muti’.

Thirty eight-year-old Maureen Ngcobo claims to have been initiated by her mother four years ago. She explained that with R800, she can turn an erstwhile poor soccer player into a prolific goal scorer: “I can take half of the money upfront and the rest upon delivery,” she boasted.

The treatment starts with ritual cleansing baths because, “there are people who fail due to misfortune”. These baths are prepared from a mixture of ochre, red and yellow barks that she calls Siklanta, a Zulu word meaning lucky charm plant. Then the Sangoma prescribes an ointment called Issimorgno’o, to be used by the patient whilst making his wish. This lucky charm lotion is supposed to attract the ancestors’ blessings on the individual and make his wishes come true. Maureen anoints the patient’s knees, forehead and eyebrows with a powder called Issitafou, to further strengthen the treatment. She points out that all this is merely the tip of the iceberg, as the bulk of the treatment is spiritual and mystical.

Joseph Moloi, who played from 1990 to 1993 for Vaal Professionals, a defunct local team, recalls that there used to be potions to distract goalkeepers. As the Muti-bearing player approaches the goal, the keeper hallucinates, allowing him to score fairly easily. The hallucinations often consist of animals or multiple balls. Moloi points out that Muti only works when people believe in its power.

Mkhwanazi, a bark seller at the Faraday market, suggests another potion made of plants. “I prepare a mixture called Ntelihisi. It is a blend of Toumatitibala and Nkounwehini, which I spray on the players’ jerseys to affest their opponents,” he says. In addition, there are powders to tuck inside the players’ boots. He admits, though, to working mostly for small local teams and never for Bafana Bafana, South Africa’s national side.

Initiated by his aunt into the tradition of Sangomas at the tender age of ten, Mkhwanazi explains that the recipe differs depending on whether the player is a striker, midfielder, defender or goalkeeper.

Monghani, another Sangoma, uses the spandja, a bracelet made of goat skin. This bracelet, he argues, connects to the ancestors from whom he draws his powers. The player conceals it on his ankle and, upon receiving the ball or before taking a penalty, he invokes the spirits in the bracelet for assistance. “When dust rises, the patient makes his wishes and they will be granted,” Monghani explains. This Sangoma claims a connection to God and his ancestors who jointly give him instructions: “Sometimes in my sleep, I dream of my deceased father who helps me solve difficult cases …”

Former Vaal Professionals player, Bull Lshoko, explains that the club owner used to favour such practices: “He would bring in a sangoma, who would light a fire then throw in muti and request every player to jump over. The ritual was supposed to further the team’s luck, but that was not always the case, as the team occasionally lost. Nevertheless, as part of the team, a player should adhere, and sometimes aversely so, to the group’s philosophy”.

As far as the South African national team is concerned, Sangomas seem powerless, as the side is still to record a win at the World Cup. There is no agreement on the reasons of such failure. For some like Khiboane, a local sangoma, instructions need to be followed to the letter for the Muti to work efficiently, “and players often fail to do so”. He explains that players not adhering to the dosage, skipping stages of the treatment or failing to practice abstinence, compromise the success of the whole enterprise.

According to Joseph Moloi, “Western teams are simply better, because soccer is primarily about technique. No muti can help an illiterate boy read. One has to firstly master the technique and the muti will strengthen the player’s potential. Westerners are better equipped to efficiently prepare for the World Cup”.

Muti or technique? The 2010 World Cup should settle the debate. — Twenty Ten