Slovakia win ‘something from heaven’ 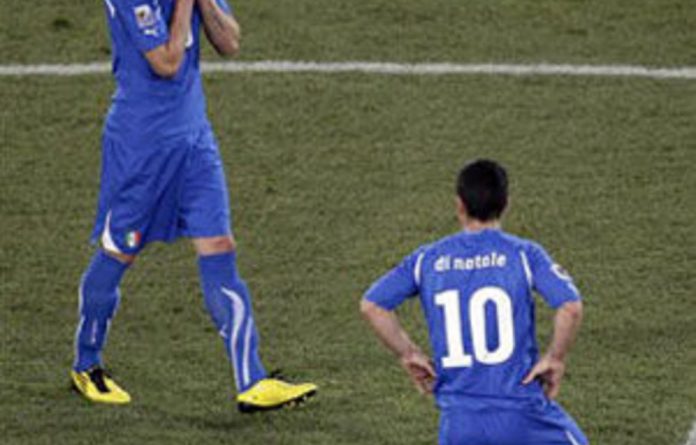 Robert Vittek and his Slovakian team were in last place in the group and had to get past defending champion Italy to reach the second round of the World Cup, so calling them long-shots was overstating their chances of progressing.

Two goals from Vittek stunned the Italians at Ellis Park and helped Slovakia to a 3-2 victory on Thursday that turned the football world upside down. The Italians were eliminated, finishing last in the group, and Slovakia — 17 years after splitting from Czechoslovakia — progressed to the round of 16 for the first time in its own right.

We catch up with Italy and Slovakia fans outside Ellis Park stadium on Thursday June 24 2010 following the reigning world champions’ 2-3 loss to Slovakia.

“We came here as newcomers and outsiders,” Vittek said. “But we have already surprised once and we want to do it again. We really have moved the limits of Slovak football somewhere else.

“We couldn’t have dreamed about this … we showed everybody we are capable of achieving this.”

What surprised the players was just how comfortable the team was against Italy.

The only threat from the four-time world champions came in the last 15 minutes, by which time Vittek had given the Slovaks a two-goal cushion.

Even the late signs of Italian potency were quickly repelled by solid defending. Kamil Kopunek added a third for Slovakia after Antonio Di Natale pulled one back for Italy. The Slovaks clung on despite Fabio Quagliarella’s second goal for the holders.

“Of course we didn’t expect such domination — maybe I shouldn’t say domination — but we had the game under our control,” said Vittek, who plays for Turkish team Ankaragucu. “We played better and we played with our hearts. That decided the match.”
Pessimism, though, had been predominant entering the last Group F match.

Slovakia had one point after a draw against New Zealand and a loss to Paraguay, while coach Vladimir Weiss had been forced to apologise for directing an expletive-laced outburst at his media critics.

“Before the match we were under great pressure,” Weiss acknowledged. “It was not so easy to prepare, in my mind I had many questions about the starting 11.”

And Weiss had a simple message for supporters back home: “Enjoy football — let’s celebrate. This is a present to all our fans.”

There was no cheery embrace for the media, though. While tensions still simmer — the players largely snubbed reporters despite their elation at conquering Italy — the Slovakian Football Association hopes for unity as the team’s South Africa campaign continues.

“I told the Slovak media that it’s time to make a clear line and start again together,” association president Frantisek Laurinec said. “I will push to Mr Weiss and the players to normalise relations.”

Now it’s time to savour the win over Italy, he said.

“It’s an extraordinary moment for Slovakian football,” Laurinec said. “It’s something from heaven, it’s like a dream … we are also ambitious.”

Those ambitions extend to strengthening Slovakia’s domestic league — all 23 members of the World Cup squad play in competitions away from home.

“This is a problem — they are playing in Europe,” Laurinec said.

“We’re doing a lot of create a pilot project of a common Czech [Republic]-Slovak league.”

For now, though, the entire focus shifts to Monday’s match against the winner of Group E. – Sapa-AP