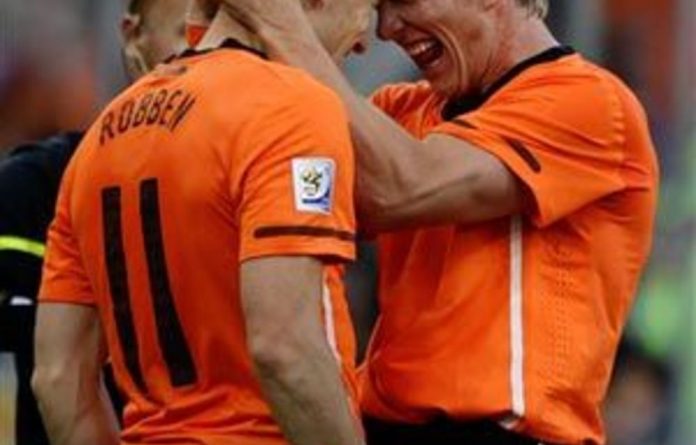 Arjen Robben and Wesley Sneijder fired The Netherlands into the quarterfinals of the Soccer World Cup in a comfortable 2-1 win over Slovakia on Monday.

Winger Robben, making his first start in South Africa, rifled home a solo effort after 18 minutes to give the Dutch the lead, before Sneijder wrapped it up six minutes from the end.

Robert Vittek scored a consolation for Slovakia from the penalty spot with the last kick of the game.

The victory sends the Dutch into the last eight.

In his 71 minutes on the pitch, Robben was at the heart of all of the most threatening moves from a Dutch team that had otherwise looked as devoid of flair as they had when grinding out three wins in their group matches.

Slovakia, who sent holders Italy packing with a 3-2 upset on Thursday, had few opportunities, and those they had were foiled by Dutch goalkeeper Maarten Stekelenburg.

Instrumental
Robben, who missed the first two matches of the campaign with a hamstring injury but was instrumental in the winning Dutch goal as a substitute in the final match against Cameroon, made an almost immediate impact at the Moses Mabhida Stadium.

Sneijder’s superb long ball out of defence gave him room to run at the Slovaks, and he sprinted towards goal before cutting inside two defenders outside the penalty area and drilling a left-footed shot into the corner of Jan Mucha’s net.

Robben nearly scored a second goal from a similar position at the start of the second half but this time Mucha got a hand to the ball to send it around the post.

The Dutch had a double scare with clear chances for Miroslav Stoch and Vittek in the 67th minute but Stekelenburg was equal to both of them.

However, the game was over in the 84th minute when, after a quick free, Dirk Kuyt beat Mucha to the ball and he squared to Sneijder to sidefoot into an empty net from the penalty spot.

In the third-minute of injury time, Stekelenburg brought down Martin Jakubko and Vittek converted the penalty. — Reuters