Luis Suárez is new villain after ‘hand of God’ claim 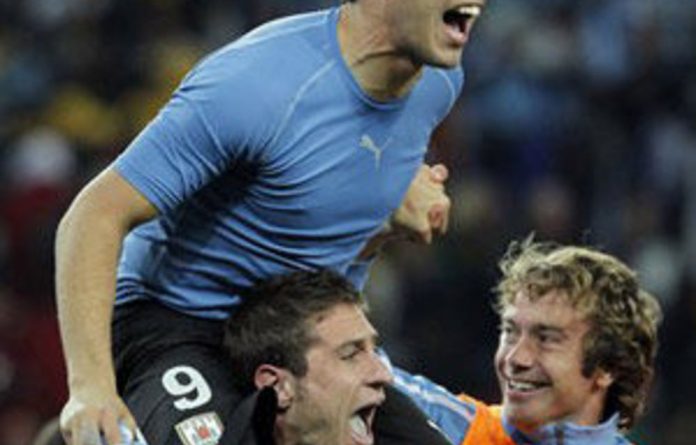 Diego Maradona step aside: there is a new pretender to the throne of most vilified World Cup figure. Step forward Luis Suárez, the Uruguayan striker whose last-minute goal-line handball helped his country reach the semifinals in which they will play Holland on Tuesday, and plunged a continent into mourning.

In comments likely to draw criticism from football fans everywhere, and England in particular, Suárez — referring to Maradona’s infamous goal in 1986 — made the incendiary claim that “the hand of God now belongs to me” and that “I made the save of the tournament” after he punched away a certain goal-bound header in the dying seconds of extra time to deny Ghana victory. Ghana’s Asamoah Gyan went on to miss the subsequent penalty, and Uruguay won the later shoot-out — leaving Africa without representation in the last four. Maradona’s Argentina are also out after Germany trounced the South Americans 4-0 on Saturday. They will now face Spain in the second semifinal on Wednesday.

Suárez (23) suggested he had not deliberately handled the ball, but reacted instinctively — a claim that may raise eyebrows among millions who saw the match. “Sometimes in training I play goalkeeper, so it was worth it,” the striker with Dutch club Ajax explained. “There was no alternative but for me to do that, and when they missed the penalty, I thought: it is a miracle and we are alive in the tournament.”

Suárez was sent off for the foul, which means he will miss the game against Holland — Uruguay’s first semifinal for 40 years. Fifa’s disciplinary committee on Saturday declined to extend the ban, which Uruguay feared could have ruled him out of the rest of the competition. Instead Suárez will be now be available for the final should his team progress that far.

Uruguay’s coach, Oscar Tabárez, had insisted that his player should face only a one-match ban.
“Saying we cheated Ghana is too harsh a word to use,” he said. “We also abide by what the referee did. It could have been a mistake. Yes, he stuck his hand out, but it’s not cheating. What else do you want? Is Suárez also to blame for Ghana missing the penalty? We try to be dignified, and if we lose a match, we look for the reasons for it. You shouldn’t look to third parties.” His comments were dismissed by Ghana and Fulham defender John Pantsil. “In the same situation, there is no chance the Ghana players would have used our hands,” he said. “Everyone was sad and crying, the mood was down, no one was happy about what happened. “We were so close to making it. We know we were doing it for all of Africa as well. It is very sad for the country— This happens once in a lifetime, but you have to let it go.” – guardian.co.uk