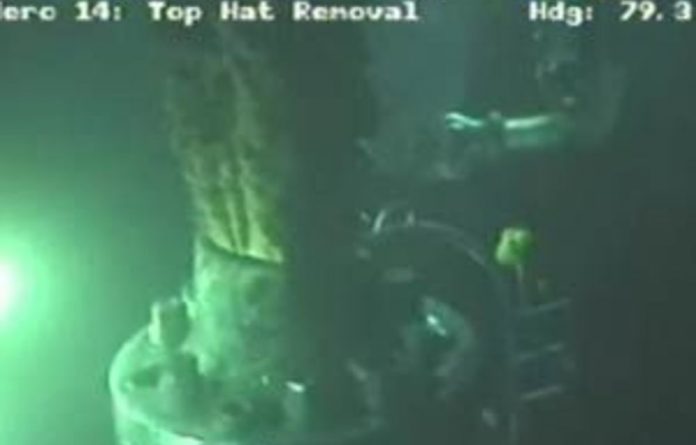 BP removed a containment cap from its stricken Gulf of Mexico oil well on Saturday in the first step toward installing a bigger cap to contain all the crude gushing into the sea and fouling the coast.

The manoeuver released a torrent of oil that will spew unrestrained into the Gulf for four to seven days — the time BP says it will take to put in place a bigger cap and seal. Officials say the new cap would capture all the oil leaking from the well and funnel it 1,6km upward to vessels on the water’s surface.

The new solution, 82 days into the worst oil spill in US history, would not allow crude to billow out the bottom and the top, as the current cap does, said Kent Wells, senior vice-president of exploration and production for BP.

“The difference is one completely seals and the other didn’t,” Wells said.

Retired Coast Guard Admiral Thad Allen, who is overseeing the US response to the spill, had said the cap switch could be finished by late on Sunday or Monday. BP’s plan, which Allen approved late Friday, showed a four- to seven-day process.

Wells said the longer stretch allows for unexpected problems. BP has another cap ready to install if the new, bolted-on cap and seal does not work, he said.

A Reuters witness who was viewing the Discoverer Enterprise drill ship on Saturday afternoon from the Transocean Development Driller 2, a rig that is drilling one of two relief wells, said the Enterprise was not flaring natural gas and looked quiet.

He said he did not see torrents of oil gushing up.

A live video feed on BP’s website showed the removed cap hanging from a line used to lift it from the leak. A different feed showed an underwater robot starting the next phase of the switch.

Wells said BP was doing final hookups and tests of an additional rig that can collect up to 25 000 barrels a day in hopes that it could begin operating on Sunday.

The procedures are part of BP’s effort to upgrade its oil-capture system with four vessels that can handle up to 80 000 barrels of oil a day and disconnect and move quickly if a hurricane approaches.

A team of US scientists estimate up to 60 000 barrels of oil are leaking each day into the sea, including the oil that BP’s systems collect and burn off.

Good news?
The prospect of finally stopping the flow of oil was potentially good news for coastal residents who have been watching the sticky black crude soil beaches in every one of the five US states bordering the Gulf of Mexico. The spill has killed birds, sea turtles and dolphins and cut into multibillion-dollar fishing, tourist and drilling industries, at a time of high US unemployment.

But in the flat, green stretch of south-eastern Louisiana where cattle graze and Gulf oil derricks dot the horizon, some residents said they had not heard about the new cap.

They had heard about the Obama administration’s ban on new drilling, an important employer in the area, and opposed it.

“Just because you have this tragic incident, you can’t stop. That’s a lot of people without jobs,” said Leah Fannin (32) who was helping a group of truckers, including her husband, load cattle on to trailers.

Fannin’s cousin, Stephen Ray Curtis, was one of the 11 men killed in the April 20 explosion on the Deepwater Horizon rig that started the spill. A memorial service was planned for him on Sunday.

The spill has taken its place firmly atop President Barack Obama’s domestic agenda, and complicated the US relationship with close ally Britain, while subjecting Obama to fierce criticism that his handling of the disaster has been too slow and too easy on the British oil giant as he seeks to pass major legislation like financial regulatory reform and an energy Bill.

Making the case that it is on top of the problem, Washington pressed BP to take advantage of an upcoming window of good weather in the Gulf to attempt to install the new cap.

The administration also went to court to defend the six-month moratorium on deepwater drilling in the Gulf it imposed to allow time for an investigation of the explosion that triggered the spill.

A federal appeals court panel on Thursday declined its request to reinstate the ban after a lower court had ordered it lifted. Drilling companies had argued that the moratorium was too broad and would unfairly cripple their industry, at a cost of many jobs.

Government officials said on Friday they would announce a new, modified deepwater oil drilling moratorium within the next several days.

Mostly, the people living with the effects of the spill said they had no idea what to expect in the weeks and months to come, even if the new containment cap works.

Freddy Danos, who normally runs a sport fishing boat out of Venice, Louisiana, but now is using his vessel to help wildlife affected by the spill, said he hoped the cap would work.

“We don’t know what the future’s going to bring — even after they get it contained,” he said. – Reuters