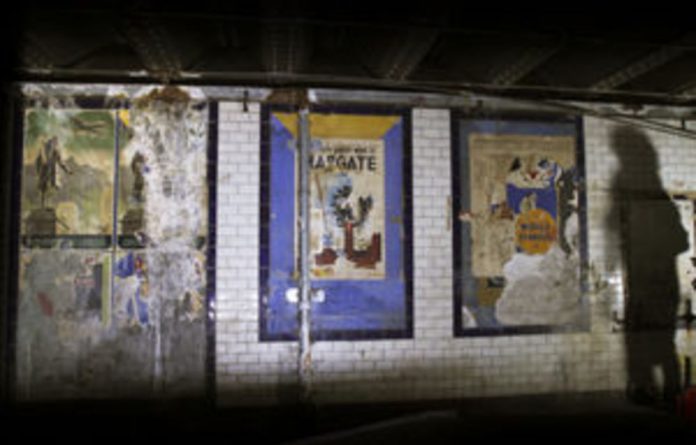 A city is as good a place as any to search for buried treasure and Jo’burg has plenty to offer in the way of treasures from another time.

Our quest started with a message from journalist Gus Silber: “Have you heard about or seen the ‘secret passageways’ at Park Station, lined with ancient, peeling advertising posters from the 1950s?”

A quick search on Google yielded a mutual rediscovery of a five-year-old photo essay posted online by “Rasty Knayles”, on a website called Architect Africa, documenting 50-year-old graffiti, hidden away in an unused passage at Park Station.

Gus and I were fascinated by what we saw: still-bright posters, rotting away at the edges and damaged by half a century of water but, inexplicably, still there. A smiling air hostess for South African Airways, a poster for the 41st Rand Easter Show, held at Milner Park and offering “£15 000 in cash prizes, trophies …”

Park Station, like the city itself, has gone through a number of iterations and reinventions. It was originally named Park Halt (the stop was next to a planned park). When the first railway arrived in Johannesburg in 1890 — a local line carrying coal from Boksburg to Braamfontein and offering a passenger service — the “halt” became the preferred alighting and departure point for people wanting to visit the retail areas on Eloff and Pritchard streets and so Park became the city’s primary station.

Two years later rail links were completed between Johannesburg and Cape Town, and other port towns soon followed. Traffic grew so quickly that the station’s facilities had to be expanded. In 1897 a beautiful 154m-long steel and glass structure (imported from Holland) was installed and used until the late 1920s — this structure now sits west of the Nelson Mandela Bridge on an empty lot at the edge of Newtown.

Exotic appeal
A new Park Station complex was opened on the site in 1932, designed by Gordon Leith. The station boasted eight platforms and four approach tracks and saw traffic of some 16-million passengers each year. Herman Charles Bosman lamented the facade’s “false attempt at drama”, but the building and the city’s reputation had an exotic appeal. In 1949 the Los Angeles Times commented: “What city with more than a half-million population, skyscrapers, deluxe hotels and a $3-million railway station today stands on a site where 60 years ago the only traffic was wild animals and primitive men?” By that time Jo’burg’s annual commuter traffic had more than trebled, to 50-million passengers.

Between 1951 and 1954 Park Station was again redeveloped. Existing platforms and tracks were lowered by 4m so that passenger concourses could be built above them. New tracks were added. The concrete slabs over both the suburban and main-line stations were completed later, when all the remaining steam and diesel locomotives (which gave off smoke and fumes that would have been dangerous to passengers’ health) were replaced with electric units.

Thirty years on, then-president Nelson Mandela launched another new station concept — an integrated commuter/retail space known as Park City, this time without separate platforms and entrances for blacks and whites. Park Station had, said Mandela, become “a symbol of a divided Johannesburg, cut in two by a river of steel made up of railway lines and unfriendly buildings”. Park City was supposed to challenge and change that, providing a hub that connected commuters with informal traders, trains with minibus taxis.
But the redevelopment scheme failed to bring back alienated white suburbanites with their private cars and fear of the CBD. It would take another 13 years — and the World Cup — to bring the yuppies back in any great numbers to catch the train between Johannesburg and Nasrec stations.

More than 100 years ago the railway company used a bronze bugle to announce the departure and arrival of trains at stations. In 2010 the trains were accompanied by the blare of 1 000 vuvuzelas. It was a call to the Jerichos of the suburbs to break down their walls.

It took a week of bounced emails and phone calls to numbers that didn’t exist before I got through to someone who could help me with the hunt for the posters. Once I’d made contact everyone I dealt with at the property company and rail services was helpful, accommodating and a little bemused at the interest in the station. None of them had seen the posters.

Using Knayles’s images as a guide, we worked out that the tunnel was probably somewhere near the Blue Room — a fancy dining area in the now-abandoned station area designed by Leith (adjacent to the main Park Station building). The concourse, which is still used occasionally for functions, was described as being like a “vast Roman thermae”, with floors almost 4m below street level and vaulted ceilings rising 15m above. It boasted marble pillars, topped with bronze capitals, and modern chandeliers hanging from the ceiling (both of which are still there). Decorating the walls were once 32 murals by JH Pierneef, commissioned by the railway administration and eventually removed for preservation.

What’s left is the detritus of progress: colourful handcrafted wall tiles, loose parquet flooring, tiles bearing quotes in Dutch about travel and friendship — and, somewhere, we hoped, our posters.

Guided by the station’s facility manager, we found someone who’d worked at the railway “all his life” and who took us to a section of tunnel now sealed off by drywall. Behind that, he said, was where we would find what we were looking for. After a brief consultation our guides thought they might be able to find another entry point. And so we went, through the basement of one building, down a tunnel, into a storeroom without lights, through another short dark tunnel, navigating the pitch black with the station’s maintenance crew’s torches until we arrived at a space quartered off by wooden frames and chicken wire. And there were our posters.

The posters hid as much as they revealed — underneath the layers of bubbling paper we could see fragments of older posters. An advert for a theatre production from 1954 melded with a poster for Christian Scientists, which promised to reveal God’s purpose. The coral tree on a poster for Durban remained neon bright and cheerful, even after half a century. There were posters for forgotten cigarette brands and brandy, and Epic cooking oil (discovered only on the final day, minutes before we had to leave).

I made a fumbling attempt to contact the transport archives to find out more about the posters. I talked in circles with a woman on the phone, establishing only that the originals of the posters were possibly buried in the Transnet Heritage Library, but that I couldn’t search for them because the library was “closed to the public” and wasn’t really open to anyone else either, owing to a lack of funding and frozen appointments.

On an earlier trip underground, accompanied by two young men who worked at the station, we sat and smoked cigarettes while the photographer worked. “You can’t even get MXit down here,” one said. After an hour he said: “More of the young people should see this. It’s the youth that make the future of the country.”