No butts, Bakkies needs a brainwash 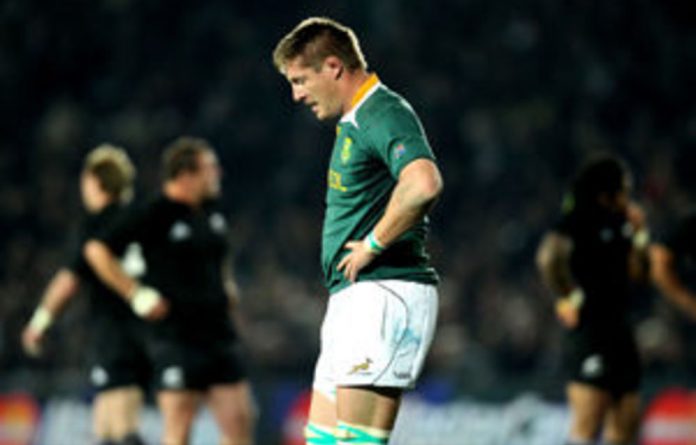 Bakkies Botha’s face was a picture of desolation as he sat in the back left seat of the Springbok bus as it inched its way out of Eden Park last weekend.

It seemed as though he had surrendered to the inevitable after his crazy headbutting of Jimmy Cowan and an immediate trio of replays of the incident on the stadium big screens meant another citing and another suspension would follow the bitter defeat as surely as night follows day.

It would be unfair to portray Botha’s misery as merely self-pity. Sources within the Springbok camp have said the hard man was distraught about the way he had let his team down and his emotional appearance on a television rugby magazine show the day he returned to South Africa only affirmed this view.

The big man is probably bewildered and uncertain about his future, but the good news for him is that his employers, the SA Rugby Union, and his coach, Peter de Villiers, see enough value in him to be busy planning some sort of intervention — along the lines of anger management classes — for one of the Springboks’ iconic players.

Just like the smallest sip of beer can set an alcoholic off on a two-day binge, it seems these days that the slightest provocation — in this case Cowan tugging on his jersey after the lock charged down his kick — produces an uncontrollable rage in Botha. There is clearly a problem.

Depending on which side of the fence you sit on, De Villiers is either an inspired man-manager who gets the best out of his players, or a weak coach who bends over backwards to allow his players whatever they want, to the detriment of the team’s results. But it is clear he sees the need for what he himself has called an “intervention” to save Botha’s career.

“Some sort of anger management classes would be a good idea. We’ll have to see what we can set up,” De Villiers told the Mail & Guardian when asked about the possibility of enrolling Botha in a programme to help him channel and focus his aggression.

The 30-year-old Bulls’ lock is fully aware that his ill-discipline has cost his team dearly and, in case he needed any reminding, captain John Smit was unusually blunt in his comments this week.

“Discipline is always a factor, every week. I don’t want to see an incident like that but he’s got his just reward for that silly behaviour. It is a fact that in team sport you can’t afford to have big egos in your team and if an individual steps out of the team ethos, it hurts the collective,” Smit said. “The team ethic is something that has to be accentuated.”

Intimidatory physicality is not something unique to Bakkies, although he does it better than most, but other enforcers go about their nasty business secure in the knowledge that they are in control and aren’t about to suffer a catastrophic meltdown that will cost their team dearly.

Os du Randt has played a lot of rugby with and against Botha and is currently the Springboks’ scrum coach, although his influence spreads much further, into the realm of a mentor. Although he sympathised with his former teammate, he was firm in his convictions that Botha needed outside help.

“I sense Bakkies is at a crossroads. I was the hell in at the time, but by half-time I just felt very sorry for him. The thing is he doesn’t pre-plan these things, it’s instinctive. So he must sort it out mentally, he just doesn’t think about it. The first step is in his thoughts, his brain needs to be re-programmed.

“I hope this will be a big lesson for him, although he’s had so many lessons before. But on other occasions he always felt he was being targeted and some of them were 50-50 decisions. But this time I think he knows he has crossed the line,” Du Randt said.

Richie McCaw is not only a top-class loose forward, but also a hard man whose place of work is at the coalface right on the edge of the law, but he said a loss of control is always a blow against your team. “It’s pretty simple. If you’re going to do something that’s going to put your team in trouble then that’s pretty stupid. You can’t afford to get angry, you just have to get on with the next job and concentrate on winning the other battles. If someone tries to provoke you, you know it’s because they’re under pressure,” the All Blacks captain said.

De Villiers has won the support of his players through his unstinting loyalty to them and his comments on the Schalk Burger “eye-gouging” incident in last year’s series against the British and Irish Lions were bizarre, but they proved to the players that the coach would back them to the hilt.

So, while making it clear that he did not condone Botha’s actions and would not dispute his suspension, De Villiers felt it necessary to highlight the role of television in the whole unsavoury incident. There was an unmistakeable sense of glee in the way the Kiwi broadcasters pinned the crime on Botha, three replays being splashed on the big screens scarcely a minute after the incident.

It has become common practice in Australia that a number of cameras are used to just follow individual opposition players around the field. The concern for De Villiers, and for many others in other aspects such as kick-off times, is that television is now running the game.

“Television played the replay over and over again, TV basically took over. They have too much influence. No one saw how Bakkies was pulled back by Cowan just before the incident. If TV had been more just and honest then it would have been a penalty before and nothing else would have happened,” De Villiers said.

For Botha’s future, however, the best thing would be to stop making excuses and get help. For starters, how about a phone call to former Springbok captain Morné du Plessis, who once mentored cricketer Herschelle Gibbs through a life skills programme when his career was in jeopardy.