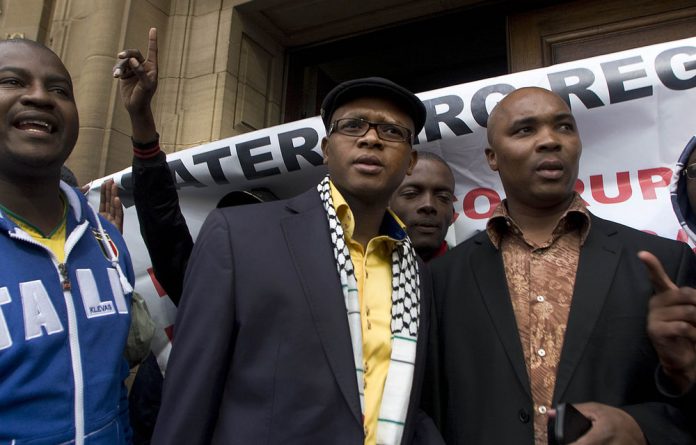 Court actions resulting from infighting in the ANC Youth League have caused it such embarrassment that the national executive committee has convened a special meeting this weekend to deal with it.

Topping the agenda is the proposed expulsion of the ousted Limpopo chairperson, Lehlogonolo Masoga. He took this to court, but dropped the action this week at the request of senior ANC leaders.

It is understood that a deal has been struck in terms of which the youth league president, Julius Malema, will advocate Masoga’s suspension for at least two months instead of expulsion. In turn Masoga will not contest leadership positions in the league for 18 months. Alec Moweni, the league’s prosecutor, is said to have been part of the on-and-off discussions on softening the stance on Masoga.

Masoga led the ousted Limpopo executive committee, which was up in arms after Malema’s allies were installed as the new leaders at the Makhado provincial conference, following a walk-out by Masoga and his group.

He is said to be anxious about this weekend’s disciplinary hearing. His supporters claim the rushed reconvening of the hearing is intended to remove him before the league’s national general council, expected to be held next month.

The council was postponed from July to give the national executive time to resolve tensions in the provinces, particularly with regard to leadership elections.

An NEC member, who asked to remain anonymous, said Masoga would probably survive expulsion only because of the important role he played in the league before his fall-out with Malema.

“The leadership is realising that to have Masoga outside the ANC youth league structures might be dangerous. He is a fierce campaigner who has done a lot for Julius and he knows Julius’s strengths and weaknesses,” the source said.

Masoga is credited with having campaigned tirelessly for Malema to become league president, travelling around the country to convince provinces to back his close comrade.

A source close to both Masoga and Malema, who has been involved in the mediation efforts, said the battle was almost over.

“Malema is committed to this plea bargain. It is just that Lehlogonolo did not trust him and went ahead with the court action. That messed things up for him and he eventually realised that.”

Another matter on the table is the Grahamstown High Court ruling that found the NEC’s decision to dissolve the Eastern Cape provincial executive committee was unlawful.

The league can decide either to appeal against the ruling or to reinstate the committee and work with the national leadership to convene a fresh provincial congress that will elect new leaders.

Floyd Shivambu, the league’s spokesperson, said the weekend meeting would discuss the “new tendencies of court actions”, a matter about which the league’s secretary general, Vuyiswa Tulelo, is expected to table a report.

He refused to comment on whether a decision would be taken on Masoga or the Eastern Cape PEC.

The broader fight in the league is between the supporters of Malema and those who want him replaced by his deputy, Andile Lungisa, at the league’s national conference next year.

ANC to crack down on internal ill discipline

Faced with falling public confidence, the ANC is to deal more harshly with members who cause divisions and drive speculation on the next leadership.
Read more
National

President Jacob Zuma's appeal to ANC Youth League delegates to do away with factional tendencies appears to have fallen on deaf ears.
Read more
National

Up for a challenge? Apply to be a presidential spin doctor

Mac Maharaj's replacement was out of a job after just three months and Zuma loyalists are on the hunt for "someone they can trust".
Read more
National

A report warns that an ANC faction, disbanded by the party, aims to make a return in the province.
Read more
Business

Union billions at heart of battle

Divisions in the Chemical, Energy, Paper, Printing, Wood and Allied Workers' Union over investments and a trust for members have spilled into court.
Read more
Advertising
Continue to the category
Coronavirus