The flat of the land 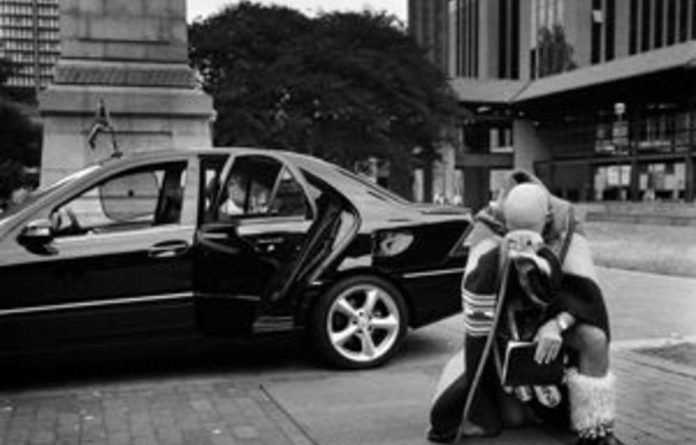 A few weeks after his exhibition, Flatlands, opened in Cape Town last year, photographer Marc Shoul received a handwritten letter. The note, its sentences rendered in a disciplined cursive, congratulated the Port Elizabeth-born photographer on his black-and-white studies of contemporary Johannesburg and offered him encouragement for the future.

“Who is this Peter Clarke guy?” asked Shoul when he showed me the letter.

“He’s an important artist,” I responded, thinking of the 81-year-old Ocean View resident’s extraordinary flame-coloured painting in the collection of the Johannesburg Art Gallery, currently on view at Cape Town’s National Gallery. “You should send him a photo as thanks.”

Flatlands: An exhibition by Marc Shoul

Photographer Marc Shoul set out to document life in Johannesburg’s inner city for his Flatlands collection. What he found was a melting pot of cultures and energy unique to the city. We speak to him about his experiences and what he hopes people will take away from his work.

Shoul did, Clarke reciprocating with a small lino print. Creativity, once thrust into public view, has a strange, indeterminate life. It is hard to know the audiences it will reach or the outcomes it will provoke and also the extent of the terrible silences it will encounter.

For the most part, Shoul’s wandering essay on public life in Johannesburg’s inner city, the outcome of five years of labour, was a failure. His 40cm x 40cm photographs found few buyers, received almost no reviews and prompted contemporary art dealers locally — those imagined conduits to global fame — to wrinkle their noses at his traditional approach to the documentary idiom.

Which makes me wonder: What did Clarke see that most of us missed? I’d venture a single word: silence. It is the operative register of photography and, with stillness, defines the draw of a medium.

Shoul’s essay includes a number of photos of a stilled noise: that whirring fan inside a clinical New Doorfontein eatery; the hectoring bass we imagine enveloping Brenda, an exotic dancer contorted on a Hillbrow dancefloor; the exclamatory rush of water we hear coming out of Norma’s hosepipe as she waters her curbside garden in Bellevue East.

Addresses are crucial to deciphering Shoul’s essay. An early photograph from 2004 shows a pedestrian, illuminated by a parentheses of urban light, walking up Nugget Street in Hillbrow. From this geographical centre his essay follows logical desire lines — shorthand for walking paths determined by animal and human instinct — wandering west to Braamfontein, east to Yeoville and south to Selby. Old Johannesburg.

Early on, frustrated by his project’s lack of coherence, Shoul travelled southeast to photographer Jo Ractliffe’s home in Bez Valley. Her insight, advice and stern forthrightness helped Shoul’s essay move beyond its preoccupation with one-shot brilliance and find a defining logic.

“It is no good just being able to make singular, compelling pictures,” Ractliffe summarised her advice to Shoul. “You must be able to answer the question: ‘What is my project?'”

To help him see his project in words, Ractliffe offered Shoul a reading list. Seated in the photographer’s Killarney flat one afternoon, he showed me one of the prescribed books, a reader containing excerpts of texts by Roland Barthes, Walter Benjamin and Susan Sontag.

“Sheesh bru,” he sighed, “I don’t understand what a lot of these people are saying.”

Paging through the book, I paused on Martha Rosler’s classic leftist critique of the liberal documentary tradition.

“Documentary photography has been much more comfortable in the company of moralism than wedded to a rhetoric or programme of revolutionary politics,” argued Rosler, a pioneering conceptual artist and art theorist. “Documentary is a little like horror movies, putting a face on fear and transforming threat into fantasy, into imagery. One can handle imagery by leaving it behind.”

Rosler’s trenchant essay, which can be read as a response to photographer Allan Sekula’s 1978 call for “a political critique of the documentary genre”, is markedly of its time. A year after its publication in 1981, local liberals and lefties disagreed over much the same issues at the Culture and Resistance conference in Botswana.

In the event the liberals won. Although the labour-rights photographer William Matlala lingers in obscurity, liberal documentarians prosper. Indeed, the liberal documentary tradition is now entrenched as the prevailing mode of imaging South Africa photographically — to the extent that its grammar has been entirely naturalised by young practitioners.

So why didn’t Shoul make a bigger splash with his exhibition last year? Why has it taken a well-received showing in Switzerland recently to make us sit up and notice his work?

One possible answer — and run a bit with me here — is suggested in Geoff Dyer’s peripatetic 2005 book, The Ongoing Moment. A sleuthing read that promotes deep looking at singular photos, Dyer makes a convincing argument for the way photographers often shoot the same subjects — hats, for example, or blind people and beds.

The same process happens on a micro-scale in Shoul’s Flatlands essay. There is a logical affinity, for instance, between his portrait of a white adolescent car guard in Braamfontein, photographed in 2004, and David Goldblatt’s 1973 straight-up portrait of a Hillbrow “newsboy”. Ditto the rooftop sleepers he and Guy Tillim photographed almost simultaneously, a few blocks apart, in 2004.

These correspondences unavoidably cue the dilemma of novelty in the art world. But it needn’t be viewed as a dilemma. As Dyer writes: “There are a number of artists who, though not pioneers or innovators, have the virtue of summing up many of the qualities of those who are.” This is Shoul’s strength, one that is deserving of handwritten letters of praise.