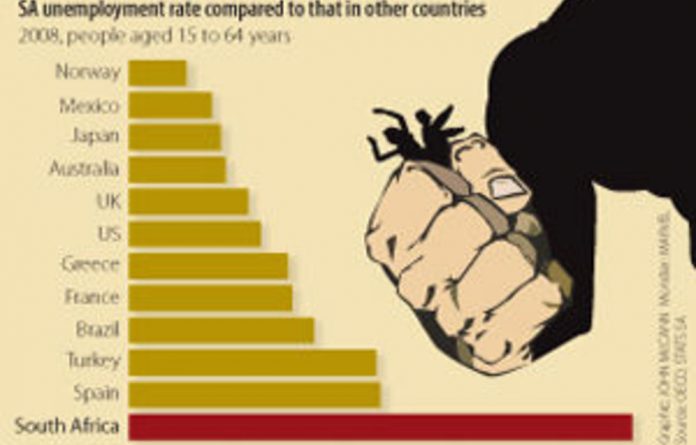 If you’re bearish on the prospects for the economy, consider that it is about to get a whopping R110-billion cash injection in the coming 12 months.

The people with this cash are the formally employed who have managed to extract wage increases averaging twice the current rate of inflation while the recession has seen the economy shed hundreds of thousands of formal jobs last year.

Total wages paid in the economy last year topped R1,12-trillion, a 15% increase on the previous year.

Economist Mike Schussler says increases this year are mostly in the 8% to 10% range, suggesting that about R110-billion will be added this year to the country’s wage bill.

The R1,23-trillion the country’s eight million formally employed workers will earn this year is about 40% of GDP of R2,4-trillion.
“This is the new divide,” says Schussler, “those who have a job on the one side and those who don’t on the other.”

He says a “very strange” feature of the recession has been that the economy threw out a lot of people, but that those who have kept their jobs have got good pay increases.

This has been led by the local, provincial and national government with an 16,6% increase and Eskom (9%) and other state-owned enterprises, where employees have received increases well above inflation.

About 392 000 jobs in the private sector were lost last year, according to the Reserve Bank’s quarterly bulletin. The net loss for the year was 349 000 as the public sector employed 66 000 more people in this period.

The overall impact was that the unemployment rate increased to 25,2% in the first quarter of this year compared with 24,3% in the fourth quarter of last year.

“In its quarterly labour force survey StatsSA reported that out of an economically active population of 17-million, unemployed persons numbered 4,3-million,” the Reserve Bank said.

The Reserve Bank said that this was “mostly due to a 19,4% increase in the average remuneration per worker in the public sector. It said that part of this increase was once-off payments to make the public sector better able to compete with the private sector.
The Organisation for Economic Co-operation and Development (OECD), in a major report on South Africa released this week, identified labour market reforms as being necessary to deliver higher levels of employment.

The report, which is broadly supportive of the country’s economic policies, says that “a greater level of coordination of wage bargaining focusing on wage and price moderation as the ultimate goal, with the government providing a voice for labour market outsiders, could deliver greater wage moderation and increase the credibility of the inflation target.”

The Financial Mail reported last month that 43% of clothing manufacturers are not complying with minimum wage legislation. It said that these firms do not pay higher wages because they cannot afford to do so.

About 70 firms, employing 4 000 workers, have execution orders against them brought by the clothing industry national bargaining council.

The OECD says that government’s goal of decent work “should not be allowed to perpetuate or strengthen the current pattern of a core of well-paid labour market insiders existing alongside a similar number of excluded and impoverished outsiders, either jobless or pushed into the informal sector.”

It says that the legal extension of collective bargaining agreements should be curtailed.

President Jacob Zuma announced a youth wage subsidy in his State of the Nation address this year to help bring young people into the job market. Pravin Gordhan, the finance minister, said in his budget that the treasury intended to introduce such a subsidy.
But the idea has been politically still-born because of opposition from Cosatu. Ebrahim Patel, the minister of economic development, is also seen to be against this youth subsidy.

But if wages and unemployment are on the same runaway trajectory, the concern is that this is being fuelled from the top, where executive salaries have also shown gravity-defying performances. A survey by PricewaterhouseCoopers released last week showed that the pay of directors of JSE-listed companies increased by up to 7% compared with just 1% in the United Kingdom.

Bankers continue to rake in the cash in South Africa, the FM reporting that Investec paid R80-million to four of its key executives in cash and bonuses, while Standard Bank’s Jacko Maree took home R18-million and Absa’s Maria Ramos R13,5-million. The FM noted that the chief executives of large companies typically earn packages of R10-million a year compared with the lowest-paid workers who earn R3 500 a month. This equates to a pay gap of 250 to 300 times.

The apparent inflexible earnings of executives has drawn fire from Gordhan and the Reserve Bank governor, Gill Marcus. It appears, though, that attempts to bring about change through moral persuasion are falling on deaf ears and that new rules may be in the pipeline.

Countries worldwide are looking at tackling what is seen as excessive executive pay. The Dodd-Frank financial reform law in the United States includes clauses in which shareholders will get a (non-binding) vote on executive pay and the remuneration committee will have greater distance from the other directors.