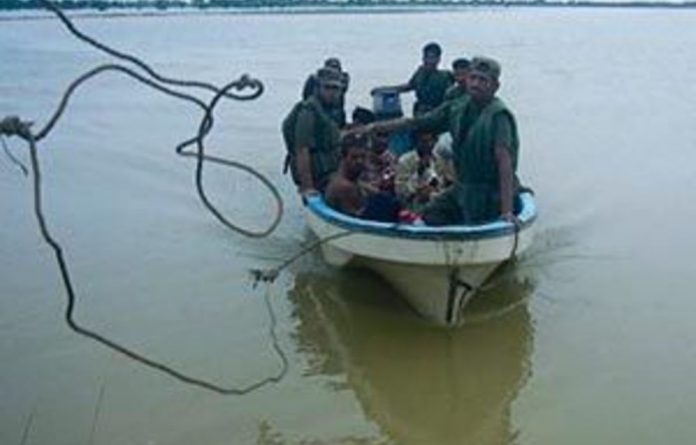 Desperate survivors crushed into relief centres on Wednesday after Pakistan’s worst floods in living memory as officials feared a food crisis could compound the humanitarian disaster.

With more than three million people affected by the flooding, Prime Minister Yousuf Raza Gilani told his Cabinet to speed up relief work and estimate damages likely to present a headache for a cash-strapped government.

Record rains last week triggered floods and landslides that washed away entire villages and ruined farmland in one of the country’s most impoverished and volatile regions, already hard hit by Taliban and al-Qaeda-linked violence.

The international community has mobilised with offers of aid after the flooding that aid workers say has killed 1 500 people and affected 3,2-million, including 1,4-million children, according to United Nations and Pakistani figures.

“Eight percent of food reserves have been destroyed by the floods, which also caused massive damage to livestock, markets, roads and overall infrastructure.

“People need assistance immediately. The WFP wants to quickly deliver food supplies. We can avert a big crisis with immediate response,” he said.

Anger was at boiling point among impoverished survivors complaining they had been abandoned by the government after their livelihoods were swept away, and protesting at a “joy ride” visit to Europe by President Asif Ali Zardari.

About 2 000 people, including women in burqas, who thronged the home of a local politician to receive food items in Shah Alam village near Charsadda said they had received no assistance from the government, only from local families.

Falak Naz (28) was visibly shaken. “I am totally helpless now. I built a small house with a lot of effort. It is destroyed. How will I repair it? Will there be any government help? These questions keep haunting my mind,” he said.

New flood warnings
Pakistan has issued new flood warnings as the rains spread, threatening to compound the misery of hundreds of thousands of victims. Many have fled, their belongings piled into donkey carts and cars, or taken refuge in mosques.

“We are facing severe shortages of food and medicine. People need food, they need medicine. We fear they will be die from hunger if not provided on time,” information minister in the north-west, Mian Iftikhar Hussain, told reporters.

The number of affected districts in Punjab has risen to seven and there are alert warnings in five districts of southern province Sindh, the UN said.

Nadeem Ahmad, chairperson of Pakistan’s National Disaster Management Authority, estimated that roughly three million people were affected — 1,5-million in the north-west and the same number in the central province, Punjab.

At one school converted into a relief centre, doctor Mahmood-ul Hassan said 1 500 people were getting treatment daily, suffering from different injuries and skin diseases.

“We have noticed cholera-like symptoms in some patients, but there is no epidemic so far. I am giving them antibiotics.”

Pakistan’s weather bureau forecast widespread rains in the southern province of Sindh, Pakistani-held Kashmir and south-western Baluchistan, as well as the hardest hit areas in the north-west and Punjab over the next two days.

The military, Pakistan’s most powerful institution, said more than 60 000 people had been rescued from flood-hit areas and moved to safer places, with 40 helicopters and 450 army boats mobilised.

The United States, which has pledged $10-million in aid, said it was sending in army helicopters to help with the relief effort.

Canada announced $2-million in emergency aid while China said it was sending in $1,5-million of supplies, in addition to pledges of aid from the UN and Britain among others.

Trail of destruction
Jamaat-ud-Dawa, a charity on a UN terror blacklist and considered a front for the group blamed by India for the 2008 Mumbai attacks, said it was sending 10 truckloads of goods and nine medical teams to north-western Khyber Pakhtunkhwa province.

A trail of destruction lined the road from Peshawar to Charsadda, one of the worst-hit areas, where houses and shops were razed to the ground as if a massive earthquake had jolted the region, said an Agence France-Presse reporter.

Anwer Kazmi, a spokesperson for Pakistan’s largest charity, the Edhi Foundation, said it had reports that more than 1 500 people had died.

The United Nations has said about 980 000 people had lost their homes or been temporarily displaced. — AFP