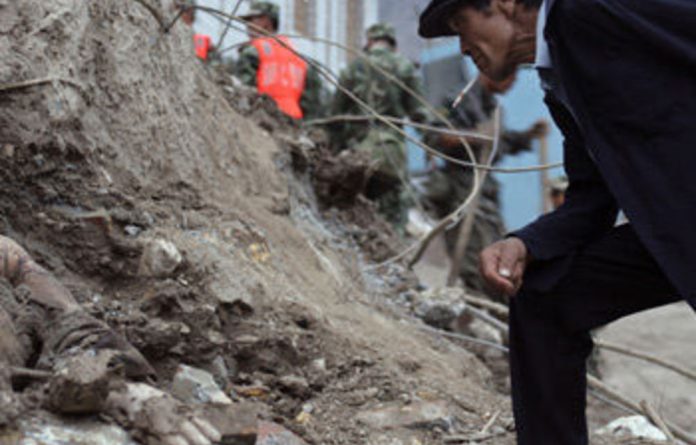 Rescuers armed with little more than shovels searched on Monday for hundreds of people after a torrent of mud engulfed a north-western Chinese town, tearing down homes, filling the streets with sludge and killing at least 127.

Nearly 1 300 people were missing after heavy rains and landslides created a torrent of mud and floodwaters that buried at least 300 low-rise homes and gouged chunks out of multi-storey concrete homes in Zhouqu County in Gannan Tibetan Autonomous Prefecture in Gansu province.

The region is dominated by steep and barren hills.

Upstream from the disaster, demolition experts and geologists were working frantically to drain a lake that had built up behind a barrier of landslide blockage.

With more rains forecast for this week, there would be fresh tragedy if the unsecured dam bursts, creating a new mud flow.

Premier Wen Jiabao visited the disaster-hit town on Sunday, to survey the wreckage, promise government help, console survivors, and urge rescuers and engineers to work as hard as possible to save lives and prevent fresh tragedy.

China has deployed all the resources of a powerful central government to battle a string of natural disasters in recent years — flooding, quakes and landslides — winning popular support for both the military and the leadership.

Six thousand troops, police and firefighters worked through the night to dig out survivors, though the slurry of mud that devastated the worst-hit areas dimmed hopes of finding many alive under the wreckage, and complicated rescue efforts.

Over a metre deep in many areas, the mire has made it almost impossible for rescue teams to bring in vital heavy equipment.

More than 1 240 people have been rescued from among the debris or plucked from the top of buildings where they had taken refuge from the onslaught. Over 100 were injured, 29 seriously.

Streams of refugees trekked out of the area, some carrying a few possessions they had managed to salvage, others with a grimmer load — the bodies of loved ones killed by the sludge, the official China Daily newspaper said.

Power lines are down in two-thirds of the county, and water up to four metres deep is still surging through some parts of town, the official Xinhua agency said. At least 45 000 people have been evacuated, including the residents of downstream towns thought to be at risk from a fresh mudslide.

The Ministry of Finance has set aside 500-million yuan ($74-million) in emergency funds for the region.

The Agriculture Ministry has also sent protective equipment and disinfectant to an area with large numbers of livestock — there are many nomadic Tibetan herders living there — to help battle possible epidemics caused by dead animals. – Reuters