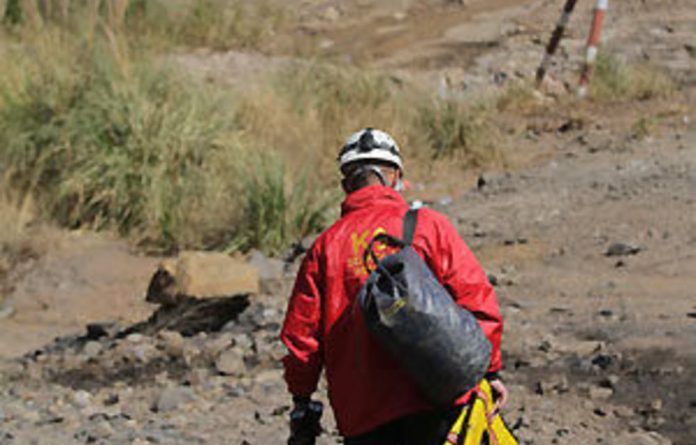 An Aurora director has defended the killing of alleged illegal miners at the mine’s Grootvlei operations, saying this was about protecting the company’s assets.

“It is simple… if you go out there and steal gold, should I just go down on my knees and pray? It doesn’t work like that. We have to protect our assets,” Aurora Empowerment Systems commercial director Thulani Ngubane told Sapa on Friday.

He said in telephone interview the “illegal” miners were trying to gain underground access by force.

“They (the men) had guns and everything… these illegal miners got shot going down underneath by force. Tell me what more our security could have done?” Ngubane asked.

The police pulled out the bodies of four people on Thursday following reports speculating that up to 20 miners could have been shot dead by security guards at the mine, which is co-owned by President Jacob Zuma’s nephew Khulubuse Zuma and Nelson Mandela’s grandson Zondwa Mandela.

“It was not the first time that a shooting took place,” said Ngubane.

Ngubane said the men were armed with guns and were “there for the challenge”.

He said it was clear that they would have resisted by force if security officials tried to stop them from going underground.

Continuous problem
“It’s not a right thing that people should come and try and invade our mine and steal our gold by force.”

Ngubane said all mining houses struggled to deal with the problem of “illegal miners”.

“How do you manage thugs? It’s a problem.”

A lawyer representing the security guards, Piet du Plessis, told Sapa that the guards did not act unlawfully.

“There are allegations about people being shot point blank… it is pure, total nonsense and our people did not act unlawfully,” said Du Plessis.

The security guards were co-operating with the police, he added, declining to give more details.

Police informed
But Du Plessis did say that the police were already informed “about the fact that a shooting occurred and that injuries and/or death may have ensued” on Monday.

The Sowetan newspaper, which broke the story on Thursday, said the security company did not inform the police.

It also quoted a survivor as saying he heard police officers saying to each other in Afrikaans, “skiet almal [shoot everybody]” before they opened fire.

The SA Police Service was also informed of the fact that the unlawful miners were armed and that suspected explosives were seen in the shaft where the incident occurred,” said Du Plessis.

He said the police arrested six illegal miners on the scene on Monday.

Police spokesperson Colonel Noxolo Kweza said she could not immediately confirm the information.

The police said they started searching for bodies on Thursday after the report appeared in the Sowetan newspaper.

Four bodies were recovered. The police continued the search on Friday but said they could not find more bodies.

Police officers were on the scene, trying to figure out what exactly happened at the mine this week.

Cosatu shocked
“We are busy investigating,” said Kweza. The Congress of SA Trade Unions (Cosatu) on Friday expressed shock at the death of the miners.

“We fully support the call by our affiliate National Union of Mineworker’s for an investigation of what really had transpired which lead to the death in the mines,” Cosatu Gauteng provincial secretary Dumisani Dakile said in a statement.

The department of mining was not immediately available for comment.

Aurora took over the mine, situated between Springs and Benoni, from Pamodzi Gold’s liquidators last October.

Aurora miners went on strike earlier this year, saying they had not been paid salaries since June. — Sapa