Wyclef wants to be president 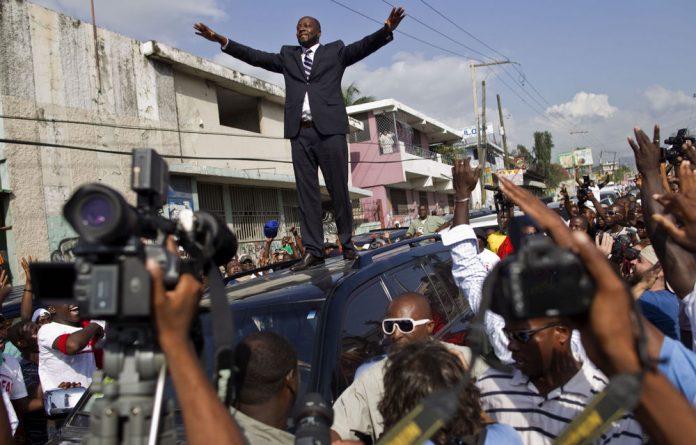 Wyclef Jean is holed up in his recording studio in a basement in New Jersey laying down the final track of his latest album, The Haitian Experience.

“One more time,” he says to his producer, and then brings the microphone up to his mouth and sings: “Wyclef, the Haitian president.”

Warming to his theme, he lets rip: “To all my DJs around the world, all hands on deck. The Haitian president: Wyclef!”

Now that the world knows the former singer with the multi-platinum group, the Fugees, turned solo star is running for president of Haiti, the key question is, ‘why’?

Jean answers it in a roundabout way. He recalls a visit he made to Haiti just before Christmas with his four-year-old daughter Angelina. Ever one for the expansive gestures, Jean decided to spread a little joy for the children of Cité Soleil, the notoriously poor and at times violent slum in the capital, Port-au-Prince.

“I wanted to bring Santa Claus to the slums because these kids were poor, but I didn’t feel like they shouldn’t have a Christmas, so I brought a carnival into the slum and I took a helicopter and I landed with my daughter and a Santa Claus right in the middle of Cité Soleil.”

He was staying, as he always does in Haiti, in the Hotel Montana. Three weeks later, on January 12, the entire building was reduced to rubble in the massive Haitian earthquake.

“We escaped death by a few weeks. So that’s why I’m standing [for president]. Maybe I could have waited another 10 years for this, but this is urgent. Singing about policy is not enough. I’ve seen musicians sing about it all their life. I’ve taken the position not only to exercise what we are singing about, but to see if we could take five years to move this country into a better direction.”

The Jean candidacy will have an explosive impact on the presidential elections on November 28. Unusually for Haiti, the race is wide open, with no obvious frontrunner. The current president, René Préval, cannot stand, having already served two five-year terms.

Into this mix blasts Jean, Haiti’s most famous son. He left the country when he was nine, relocating first to Brooklyn and then to northern New Jersey, later forming the Fugees with his cousin Pras Michel and Lauryn Hill. Their second album, The Score, sold more than 18-million copies worldwide and won two Grammys. It included the single Killing Me Softly, which reached No 2 on the US airplay chart and No1 in the United Kingdom.

No one doubts that Jean is likely to have an electric presence when campaigning begins. But there are other doubts, like why should anyone in Haiti vote for a pop star as president at such a dire moment in the country’s history?

“People can say, ‘Clef, what do you know about politics and running the country? It sounds pretty insane, Clef.’ But when you think of the connections and allies I’ve assembled around the world, I feel I can help move this country forward.”

Jean adds that if he were the kind of rapper who went around saying “shake my booty, pop the champagne, let’s go”, “I would say we definitely don’t want a pop star like that running the country”. But he insists he is not like that at all, that he has always been political, even in his music.

He starts talking about himself in the third person: “This pop star was not necessarily trying to be famous. His first album was called Blunt on Reality. It talked about human rights, social issues.”

He says that even in naming itself the group was thinking politically. “We wanted to call the group Refugees, but when we went to register it we saw there was already a group with that name, so we called it Fugees. So this pop star stands up, this pop star has always been an activist for the people.

“In my world and the stereotypes we usually have, us hip-hop artists are going to go to jail. Here you have an artist who says ‘My idea is not to go to prison, my idea is to run my country as president’. He decides he’s at a point to transform music into policy.”

Jean has been actively involved in Haitian affairs since 2005 when he set up his charity, Yéle Haiti, which works with poor young people, helping them to read and write, and awarding educational scholarships. But as his Santa Claus story illustrates, it was the earthquake that really convinced him of the need to get directly involved in the running of his country.

He reached Port-au-Prince the day after the quake and says he was instantly sucked in. “I would say for two days I went missing. Two days underground, picking bodies up, taking them to a morgue, finding my friend [the rapper] Jimmy O dead in his car with a building toppled on him. I had his daughter in my arms.

“Then on the other side of town, my man gets shot. He’d been working for Yéle Haiti. At that point I lost it. Two days, just like being in the apocalypse.”

Almost seven months on from the earthquake Haiti remains in an apocalyptic state. Hundreds of thousands of people are still living under plastic sheets despite the onset of the hurricane season, scrabbling for scarce food or work. Were Jean actually to win the election, where on Earth would he begin?

“There’s nowhere to go but up in Haiti right now, because everywhere you look there’s disaster. So the first thing you do is engage education and job creation.”

Secondly, he says, he would encourage people to move out of the ravaged capital by building new agrarian villages in the countryside. “Each village would be associated with a different food — mango village, sugar cane village. If you can provide a job opportunity and a home for people, you can start to decentralise Port-au-Prince.”

Education would be the key, he says, because “until you learn to read and write, it’s called modern slavery”.

But first, before he can go to work on these policies, there’s an election he has to win and, if it is like previous Haitian elections, it’s going to get dirty. He says he’s ready for anything that is thrown at him.

“Well you know politics is a combat sport and I respect that. And I’m good at judo.”

One of the brickbats that is certain to be hurled at him is the controversy that has raged over the financial handling of his charity following critical reports from the Washington Post and the website Smoking Gun. Yéle Haiti, which has raised about $9-million in disaster relief since January, has been accused of a range of financial irregularities, from making late tax filings to directing charitable funds to Jean’s own private commercial interests.

In 2009 the foundation filed tax returns for the previous three years.

Why so tardy? “If you make a mistake you have to admit that it’s a mistake. The taxes weren’t filed on time, so what do I do? I said, find me the best accountant because this foundation is going to the next level. So we brought in RSM McGladrey and now everything is being filed on time.”

To the charge that an excessive amount of the donations to the charity goes into its administrative costs, Jean said he was unashamed about employing good staff. “We’re not going to stop administration, because we need it and these people have to be paid well.”

The stickiest accusations have concerned payments from Yéle Haiti to Jean’s own businesses. They include $250 000 paid for television air time to the TV station Telemax, which Jean co-purchased in 2006, and more than $100 000 spent on a concert in Monte Carlo that Jean participated in, of which $75 000 went for backing singers and $25 000 to Jean himself through his recording company.

What does he say to the charge that some donations ended up in his personal coffers? “Wyclef took money for his own personal need? No, that didn’t happen. If anyone is going to suggest Clef is going to take personal money for himself, it’s ludicrous. No, we would never do that. My governance at the time, you can question that, but my honesty you can never question. I would never steal from my country.”

So does he really think he can win?

“Even if I lose, I do win,” he says. “The world will have known that in history there was a young man from Haiti who felt he wanted to do more than music, to engage in Haitian politics and help move the country forward. So in that sense I feel that even if I am to lose, I am to win.” —