A curious case of the Honda Accord Tourer 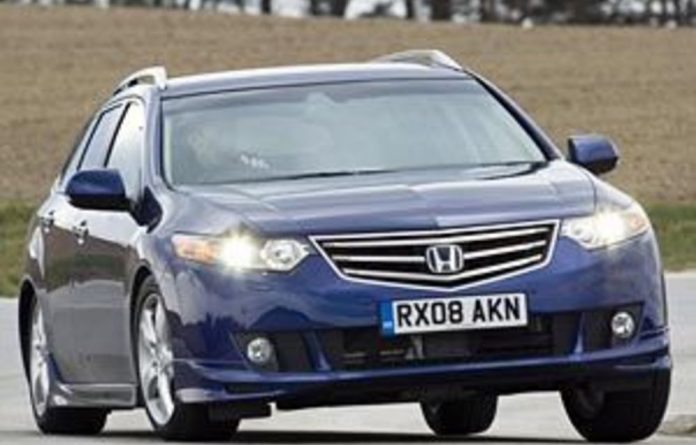 For several years now I’ve been dying to drive the Honda Accord Tourer. Viewed from the frame of other cars windscreens it’s always looked so appealing, futuristic and as practical as bullets. Nothing like the usual old-timers’ run-abouts from the Chris De Burgh of car-makers.

Belying my years that lie on the lighter side of 30, I truly believed I could sink my teeth into this car and prove that even something as sleep-inducing as a diesel-powered station wagon could tickle my fancy.

In the metal it certainly is a big, ungainly thing, handsome in a tea-and-scones at your in-laws house kind of way. I will say it is more attractive than the regular Accord sedan, which was deemed the best car in South Africa two years ago. For me, there’s no delicacy in the Accord’s design, the wheels are too small for its oversized proportions and the front styling looks too villainous for a Honda. The enlarged rear three-quarter that transforms it into an estate does make use of a lot of metal, which appears impressive from a distance, but the more one stares, the more bulbous it looks, with something of a bullfrog about it.

Not 10 minutes into my virgin journey, and my girlfriend and I had aged 10 years. Twenty minutes had aged us 20 years. By the time we arrived home we were both closing in on our fifties. Like The Curious Case of Benjamin Button, but only in reverse. It’s hard to explain, but it’s just the feel of this car. The ride is extra soft and absorbent, the diesel power delivery is lethargic, the steering and handling is arthritic, and the whole car feels heavy. It’s the oldest-person’s car I’ve ever driven, which is odd because the Civic, Accord sedan and FR-V don’t feel nearly as old and fuddy-duddy from behind the wheel, and the ballistic S2000 ranks up there as one of my favourite cars to drive.

This dichotomy means Honda knows exactly what it’s doing when it makes a car and the Accord Tourer feels the way it does on purpose. And by that I cannot abide. Because, if it is an old person’s car, why have they bothered with the crazy styling? Why does the interior come from the bridge of the Starship Enterprise? Why does its automatic gearbox have sporty, F1-style paddles behind the steering wheel?

Not only does it feel big at speed, but it feels even bigger when piloting the battleship through car parks and small streets. To solve this problem it’s fitted with park sensors as standard, but they are the most dim-witted sensors I’ve experienced in a long while. They were defeated by anything that wasn’t a solid brick wall and were surprisingly bad at allowing you to park close to things, which sort of defeats the point.

The power is 110kW from its 2,2-litre i-DTEC motor and it’s not really enough to get the heavy body moving with much purpose. The five-speed automatic gearbox is very good and it’s the only one you can get on the diesel model. Economy from the diesel motor should be much better — Honda claim 6,7-litres per 100km on the combined cycle, but I averaged more than 8-litres.

The diesel Tourer has great load capacity, it’s very comfortable and very safe, but at R407 900 it’s the range topper, and one has to consider that all these pros can be found on the petrol model too.

For more all-round capability and a better driving experience you should have a look at the all-wheel drive Subaru Legacy Outback, which starts at R345 500. However there’s no diesel derivative of this car. And for great styling, a classy drive on-road and one of the best diesel engines currently available, you should also consider the Audi A4 Avant TDI, which starts at R383 500.

In a curious case, for the first time in a long time, a Honda vehicle has let me down.