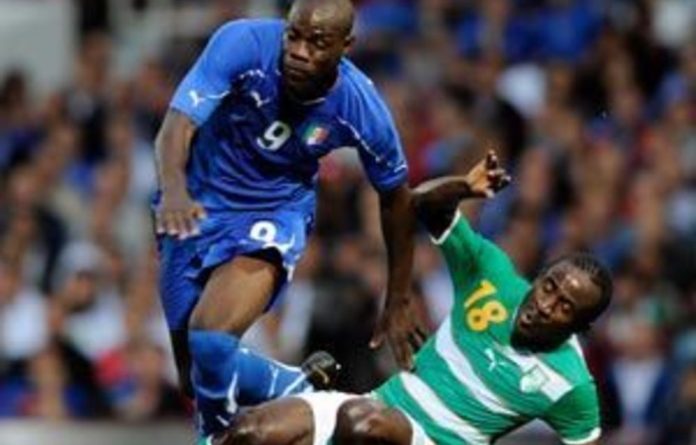 When Mario Balotelli walked through the doors at Manchester City’s training ground, he was wearing a gold medallion over his shirt with the inscription “Professionalism, Endeavour, Humility”. It was a present, he said once the hubbub of his introductory press conference had died down, from his adoptive mother, Silvia, to remind him of the qualities he will need for the next chapter of his professional life.

As he took his seat in an airless room — by far the largest turnout for an event at the Carrington training ground — it was explained that he would be happy to take questions in English. But Balotelli chose to speak in Italian, except for four words on the first of the many occasions he was asked why his career had become as synonymous for its controversies as for the goals.

The 20-year-old, described by Internazionale’s former manager Jose Mourinho as “unmanageable”, smiled disarmingly and turned to the man posing the question. “I’m no bad boy,” he said, not losing eye contact.

As it turned out, he did not want to talk about Mourinho. He said he was happy to be in Manchester, pleasantly surprised by the weather and he talked of it being a “tranquil city, except for the paparazzi following me everywhere”.

In the next few weeks he hopes to get his orange Lamborghini shipped over from Milan. He spoke of a new life, away from the issues that affected him as a young, gifted black man playing for Internazionale in Serie A.

“As far as I know, there is no racism in England,” he said. “In Italy there were some really bad experiences. I learned how to deal with it, which was to pretend it didn’t hurt, but it was something that really bothered me.”

There were other glimpses of hurt. Balotelli spoke of “outside forces” pushing him out of Italy.

He said he was sad to leave behind many friends and had bought his former teammate, the 2006 World Cup winner Marco Materazzi, an iPad “with a special dedication” to thank him for his guidance as a senior pro.

But he pinpointed the Champions League semifinal first leg against Barcelona at San Siro last season as the night he knew he had no future at Inter — the evening he reacted to being booed by throwing his shirt to the floor.

“Every day after that,” he said, “there were one or two pages in the Italian papers about me. It had become difficult for me to live in Milan.”

There were times when he was pensive, guarded, prickly even.

‘I’m just a normal guy, not particularly good or bad’
The man sitting to his right, Roberto Mancini, had introduced him as someone who could become one of the greatest footballers in the world in the next two years, but Balotelli’s look of mild amusement said it all: Why are all these reporters going on about everything off the field when I’d rather stick to talking about football?

“I’m not a bad person,” he said at one point. “That’s what they say about me in Italy, but I’m just a normal guy, not particularly good or bad, just normal.”

Still the questions continued. Why did he have such a troublesome reputation? “I’m not sure.” But you must have a theory? “No, not really.”

Was it fair or unfair? “Really, I don’t care.” A shrug of the shoulders.

Nothing to see here.

Eventually, Mancini butted in. “All of us, when we were younger, were bad boys,” the City manager said. “All of the people here. When you are young your behaviour can be bad but, after that, you change. For me, he’s just a normal guy.

“It will be good for him to leave Italy, he can grow into a man and he is going to be a very important player for us.

“He has everything. He’s young, good technique, strong in the air, quick — everything you need to be one of the top players.”

Mancini said that he had given Balotelli his debut, at the age of 17, and said he could not remember a single problem with him during his time at San Siro.

“There were clubs in Italy who wanted to sign me but I always wanted to come to Manchester and one of the reasons for that was the manager,” Balotelli said. “It was one of the more important factors. If he wasn’t here, I probably wouldn’t have come.”

And, finally, the challenge: can he guarantee he will stay out of trouble?

He thought about it for a few seconds. “It’s a time to mature,” he said, “but mistakes can always occur.” —