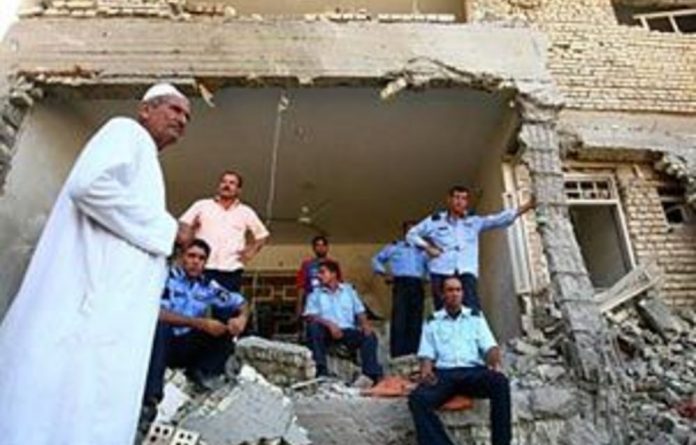 Suicide bombers and other attackers killed at least 62 people in apparently coordinated attacks on Iraqi security forces in Iraq on Wednesday, less than a week before United States troops formally end combat operations.

The bombings also wounded more than 250 people, underscoring the fragility of Iraq’s security and the uncertainty of its political situation more than five months after an election that produced no outright winner and as yet no new government.

In the southern city of Kut, 150km south-east of Baghdad, a suicide car bomber killed at least 30 policemen and wounded 87, said Lieutenant Colonel Aziz al-Amarah, commander of the rapid response police force in the province of Wasit.

The blast shattered the building. Burnt-out cars littered the scene as rescue workers searched for survivors.

“Parts of the building collapsed and there are still policemen’s bodies, including the police chief, under the rubble,” Amarah said by telephone.

In Baghdad, a suicide truck bomber killed 15 people and wounded at least 56 others in an attack on another police station, Interior Ministry and police sources said.

Baghdad security spokesperson Major General Qassim al-Moussawi blamed insurgents linked to Sunni Islamist al-Qaeda and warned of more attacks as US troops end combat operations ahead of a full withdrawal by the end of 2011.

“By mobilising all its capabilities, the enemy is trying to escalate the terrorist attacks during this coming period, which coincides with the pull-out of the US combat troops from Iraq,” he said. “We have plans to face those terrorist attacks.”

Moussawi put the death toll in Baghdad’s Qahira blast at four, with 35 wounded. Death tolls in Iraq can vary wildly depending on the source.

In the Shi’ite holy city of Kerbala, south-west of Baghdad, at least 29 people were wounded when a car bomb went off near a police station, a health department source said.

A parked minibus packed with explosives blew up near a police station in the southern oil hub city of Basra, wounding 12 people, police and hospital sources said.

Al-Qaeda flag
In Buhriz, about 60km north-east of Baghdad, gunmen detonated bombs near the houses of policemen and raised the flag of al-Qaeda’s Iraqi affiliate on one of the buildings, police sources said. Five people were wounded.

Other attacks in Baghdad, Diyala province, Anbar province and the cities of Kirkuk and Mosul, brought the overall death toll from the attacks to at least 62.

Iraq is on high alert for attacks by suspected al-Qaeda-linked groups following the election, and ahead of the end of the seven-and-a-half year US combat mission on August 31.

More than 4 400 US soldiers and at least 100 000 Iraqi civilians have been killed in the sectarian warfare and fierce insurgency unleashed after the invasion in 2003.

Overall violence has dropped sharply since the height of sectarian carnage in 2006/07. But bombings and killings take place daily, suggesting insurgents are trying to exploit the political vacuum as Iraq’s leaders jostle for power.

US and Iraqi security officials say al-Qaeda’s local affiliates are also trying to prove they remain a potent force after many of their top leaders were killed earlier this year. — Reuters