Hounding of the Roma 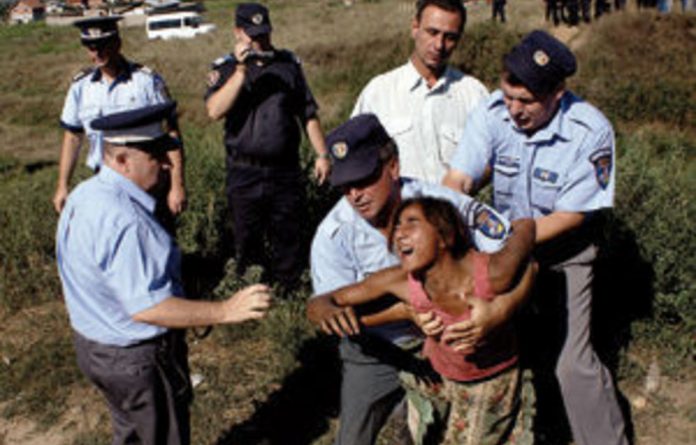 France’s crackdown on its foreign Roma population came under fire from all sides of the political and social spectrum this week as pressure mounted on the government to abandon its plan to “return” hundreds of people to their native countries.

Interior Minister Brice Hortefeux insists that opposition to the strategy comes exclusively from a left-leaning Parisian elite out of touch with the mood of mainstream society, but a torrent of criticism is now stoking a backlash from the people the government claims to represent. As the European Commission against Racism and Intolerance issued a statement saying it was “deeply concerned” about France’s tactics, a doctor and humanitarian aid worker said she would refuse the country’s highest honour in protest at the clampdown.

Anne-Marie Gouvet, who has taken part in several aid missions to conflict zones, including Afghanistan, said: “After the expulsions of Afghans, and now of the Roma, I would prefer to refuse this Légion d’honneur with my head held high.” Gouvet’s stand comes days after Arthur Hervet (71), a priest in Lille, said he would return his national order of merit medal to Hortefeux as a sign of his anger over the “war” waged by the government on the Roma.

“I would like to tell Mr Hortefeux that I feel he does not know the situation; he does not know what these people are going through,” said Hervet. He did, however, retract his earlier wish that Nicolas Sarkozy would suffer a heart attack. Hervet is not the only figure from the Catholic Church to express his outrage at the president’s law and order push, which has led to the expulsion of around 100 non-authorised Roma camps in the past two-and- a-half weeks.

In words seen as an implicit warning to the Élysée, the pope pleaded in French on Sunday for acceptance of human diversity. Elements of the religious right have shown signs of increasing unease, reflecting concerns among the bastion of French society that Sarkozy prided himself on having won over with his declarations of faith in 2007.

Christine Boutin, a former government minister, said the issue could yet prove the trigger for her Christian Democrat party to split with Sarkozy’s UMP, with whom it is currently in a right-wing alliance. Hortefeux, the minister in charge of the crackdown and a close friend of the president, has attempted to portray his critics as members of “the billionaire left” and intellectuals “in Saint-Germain-des-Prés” whose ideas are far from those of ordinary people.

In an interview with Le Monde at the weekend he said there was a crucial distinction between the small Parisian political-media milieu and the reality of French society. Much of the criticism has come from well-known anti-Sarkozy figures such as Yannick Noah, the former tennis star who is consistently voted France’s most popular public figure. But it has also stirred rebellion on the right.

For many, measures involving the revoking of certain foreign-born criminals’ French citizenship and the dismantling of 300 Roma camps has proved a step too far.

Rachida Dati, the former justice minister and now a member of the European Parliament, has criticised “those who, in order to satisfy their political ambitions, want to categorise French people with no regard for fraternity”. Latest opinion polls reflect a lack of public support for Sarkozy’s security drive. —