‘ANC is the party of the black middle class’ 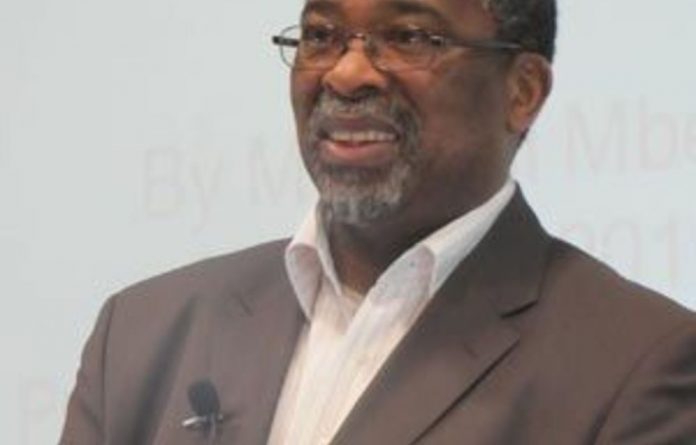 Moeletsi Mbeki has lambasted the ruling ANC as a “party of the black middle class” following the massive public-sector strike that has brought the country’s education and health services to a standstill.

The popular economic and political commentator and brother of former president Thabo Mbeki said South Africa’s large working class was under the misguided impression that the ANC was “the party of the people”.

“The unions in this country do not understand the political economy of South Africa. They think that the ANC is the party of the people. The ANC is the party of the black middle class. The fact that the masses vote for it does not mean they control it. The policies of the ANC favour the black middle class and the established businesses. They do not favour the working class.”

Mbeki, who wrote Architects of Poverty: Why Africa’s Capitalism Needs Changing, was speaking as a guest lecturer on Thursday at the University of the Free State (UFS) in Bloemfontein, to third-year and honours economics students.

“You just have to look at the types of houses that the ANC government builds for ordinary South Africans,” he said.

“If you had a party that was a pro-working-class party, it would not have built these so-called RDP houses that are being built by the ANC government. The unions have all along been under the illusion that the ANC is the government of the working class, and [Zwelinzima] Vavi and them are now beginning to realise that this is not the case.”

His comments came on the same day Vavi delivered his strongest condemnation yet of Zuma’s government at a press conference in Johannesburg. The general secretary of Cosatu said that the alliance was “dysfunctional” as the strikes continued, slamming the corruption of the state.

On Monday, the government went back to the negotiating table with unions after President Jacob Zuma demanded they do so. They have put an offer on the table of a 7,5% increase and an R800 housing allowance, just shy of union demands of 8,6% and R1000.

Workers were on Tuesday voting on whether to accept the offer.

Meanwhile, Mbeki also weighed in on the Protection of Information Bill and the proposed media tribunal, which have brought the media and the government on to a collision course, saying the ANC government was trying to muzzle the media because it wanted to safeguard corruption within government.

“The question of freedom of information is very closely linked to the rise in corruption in the government,” he said.

“What the politicians are doing is that they are trying to hide that corruption. The media in this country have been playing a very critical role in exposing cases of corruption. That is why Vavi now has bodyguards.”

He said he recently met the outspoken Vavi, who was surrounded by four bodyguards. The Cosatu leader said he was getting death threats because he was opposing corruption in government, according to Mbeki.

Moving on to economic policies, he called South Africa’s the “worst in the world” because they benefited people who were already rich and prevented the emergence of entrepreneurs.

“In fact, one of the serious downsides of black economic empowerment [BEE] is that it takes people who should normally be entrepreneurs and who should be creating new companies and new jobs out of that space and just makes them wealthy. BEE has been a disaster because it created this massive economic inequality; it created this class of idle rich who have tons of money but do nothing.”

‘We need more competition in our political system’
Mbeki has been vocal about the failures of BEE in the past, in contrast to his brother, who championed those policies.

His lauded book, published in 2009, argued that Africa’s faults lay primarily with its rulers and political elites, who keep their fellow citizens poor while enriching themselves.

In his lecture on Thursday, he said under-investment in the economy was having dire consequences in terms of unemployment and poverty. According to Mbeki this, coupled with the growth of Black Nationalism, was actually driving down the ability of the economy to absorb labour.

“What really lies at the bottom of our economic problems in South Africa is that we have too much of a one-party dominance of our political system. We need more competition in our political system and until we realise the policies of the ANC are not going to change,” he said.

Mbeki worked as a journalist in the past, winning the prestigious Nieman Fellowship and working at the BBC. After returning to South Africa from exile in 1990, he was appointed head of communication for Cosatu and media consultant to the ANC. However, by 2006 he was on a controversial list of commentators blacklisted by the SABC for what was seen as their anti-ANC views. In addition to being a private business entrepreneur and director of several companies, he is the deputy chairperson of the South African Institute of International Affairs, an independent think-tank based at the University of the Witwatersrand.