Pakistan will not drop players without proof 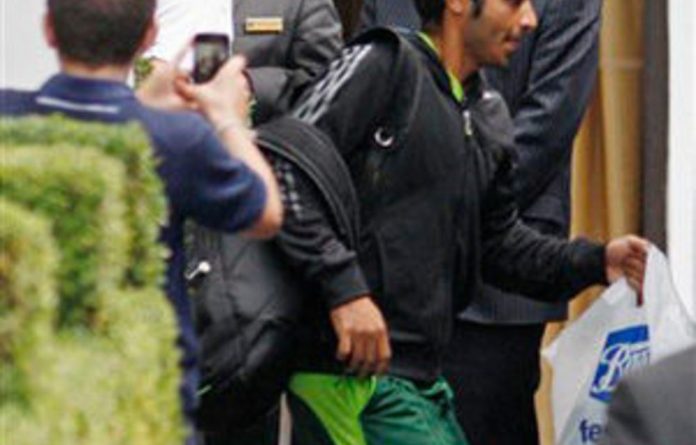 Pakistan will not suspend any players being investigated for alleged corruption without proof of wrongdoing, Pakistan Cricket Board chairperson Ijaz Butt has said.

A newspaper report alleging three players had been bribed to fix incidents in last week’s fourth test against England has rocked the cricketing world and probes by British police and the International Cricket Council (ICC) are underway.
London police confiscated the mobile phones of test captain Salman Butt as well as pace bowlers Mohammad Amir and Mohammad Asif, and the trio — plus wicketkeeper Kamran Akmal — have been questioned at the team’s hotel.

“There is a case going on over here with Scotland Yard,” Ijaz told website cricinfo.com.
“This is only an allegation. There is still no charge or proof on that account. So at this stage there will be no action taken.”

The Pakistan team arrived in Taunton in west England on Monday to play a warm-up game for a seven-match one-day series against England which starts on Sunday.

The ICC’s anti-corruption unit has been asked to submit a report on its investigation within the next three days.

ICC president Sharad Pawar told reporters on Monday the issue had been discussed in a teleconference by the head of the council’s Anti-Corruption and Security Unit Ravi Sawani, Ijaz and his English counterpart Giles Clarke.

“We at the ICC are waiting for definite information from the PCB and our own anti-corruption unit. We hope to get something in the next two to three days’ time and that information would lead to appropriate action, if required,” he said.
Pawar has ruled out the possibility of Pakistan cutting short their tour of England.

“We will not tolerate corruption in this great game,” Lorgat said in a statement.

On Monday, the police said they had released on bail a 35-year-old man who had been arrested on suspicion of conspiracy to defraud bookmakers following the report in Britain’s News of the World newspaper.

According to the report, Mazhar Majeed, an agent who claimed to represent 10 Pakistan players including Butt, said Amir and Asif had bowled three no-balls between them by pre-arrangement in the fourth test against England which finished on Sunday.

The newspaper report also cast doubt on the second test between Pakistan and Australia in Sydney this year when Australia made a remarkable comeback to win by 36 runs after overcoming a 206-run first-innings deficit.

The scandal has outraged cricket fans in Pakistan where protestors in Lahore threw rotten tomatoes at donkeys who had the names of the players accused of taking bribes stuck on their foreheads.

“These players have let us and the country down. We are already facing so many problems because of the floods and terrorism and they took away our one source of happiness,” one protestor told a television channel. — Reuters