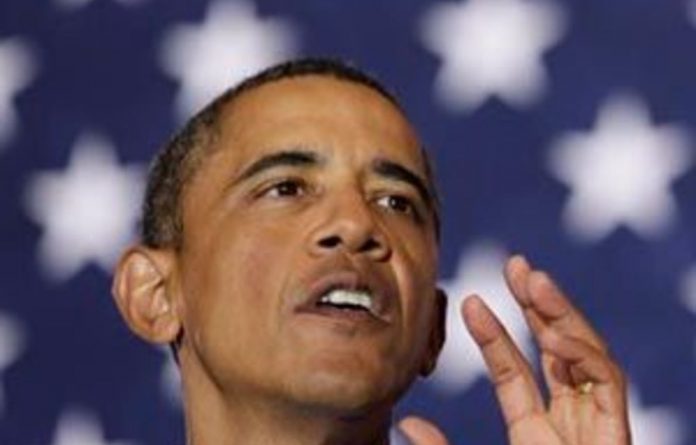 President Barack Obama steps into Middle East peace efforts on Wednesday in a bold bid to relaunch direct Palestinian-Israeli negotiations amid scepticism over his chances of success.

Fresh violence blamed on the Islamist movement Hamas and continued deadlock over Israeli settlements threatened to curtail the latest efforts by Obama, who made Middle East peace a priority early in his presidency.

Israeli forces sealed off parts of the West Bank, Palestinian authorities arrested dozens of suspects, and furious settlers vowed to flout a moratorium on settlement construction after Hamas militants gunned down four Israelis near a Jewish settlement.

Obama, who is hoping to succeed where so many of his predecessors have failed, made his first presidential call to Palestinian president Mahmoud Abbas and appointed a Middle East envoy, veteran peacemaker George Mitchell, two days after his inauguration.

The attack in the Palestinian West Bank, strongly condemned by Abbas and the White House, was a clear and bloody message from Hamas, a staunch opponent of the talks.

But Israeli Prime Minister Benjamin Netanyahu pledged to keep the talks on track after a 20-month hiatus while stressing Israel’s security demands.

“I will set clearly the security needs that are required precisely to address these kind of terrors,” Netanyahu said. “We will not let the blood of Israeli civilians go unpunished.”

And the host of the talks, US Secretary of State Hillary Clinton offered fresh security assurances to the Israelis.

“It is one of the reasons why the prime minister is here today, to engage in direct negotiations with those Palestinians who themselves have rejected a path of violence in favour of a path of peace,” she said as she met with Netanyahu late on Tuesday.

“We pledge to do all we can always to protect and defend the state of Israel and to provide security to the Israeli people.”

Netanyahu’s spokesperson, Mark Regev, said Israel was “committed to peace” and the attack would not prevent the talks from going ahead.

Separate meetings
Obama is hosting separate meetings not only with Abbas and Netanyahu, but also with key regional powerbrokers King Abdullah II of Jordan and Egyptian President Hosni Mubarak at the White House before dining with the four leaders and diplomatic Quartet representative Tony Blair.

The meetings are designed to help launch direct talks between the Israeli and Palestinian leaders at the State Department on Thursday.

The Quartet of the United States, the European Union, the United Nations and Russia launched a roadmap for peace in 2003 that calls for a Palestinian state existing alongside a secure Israel.

Top-level talks in search of the elusive peace deal broke off in 2008 when Israel invaded the Palestinian Gaza Strip to halt militant rocket fire on its south.

And there are few illusions that the new direct talks, after months of US-sponsored indirect negotiations, will overcome lingering divisions anytime soon, even as Obama expends precious political capital ahead of congressional elections that may batter his Democratic Party this November.

Huge issues — many unresolved since Israel’s founding in 1948 — remain on the table, including the status of Jerusalem, which both sides claim as their capital, and the fate of Palestinian refugees chased from their lands.

Continued Jewish settlements in Palestinian territories are seen as a major hurdle to the peace process, with a 10-month Israeli freeze due to expire on September 26.

‘Realistic’ time frame
Yet Obama’s Middle East envoy Mitchell said the president’s one-year time frame to seal a deal was “realistic” despite the scale of the task.

“We believe these negotiations can be completed within one year,” Mitchell said. “We will engage with perseverance and patience to try to bring them to a successful conclusion.”

But Abbas has threatened to walk out of talks if settlement construction resumes, and Netanyahu has vowed not to extend the moratorium. The attack near the Kiryat Arba settlement underscored the massive importance of the issue.

Netanyahu, a hawk who only last year recognised the internationally backed principle of a two-state solution, said on Sunday he hoped to reach “a peace based on recognition, security, stability and economic prosperity between the two peoples that will endure for us and our children”.

Abbas, meanwhile, has urged “Israel not to miss this historic opportunity for peace,” saying “if there is only a 1% chance of achieving peace we will strive for it”.

Israeli President Shimon Peres insisted Netanyahu was “aware of the greatness of his mission” during his US visit and was “well prepared to meet the chance.”

But Peres said any future Palestinian state must be demilitarised. — AFP