Strikers return to work amid dissent 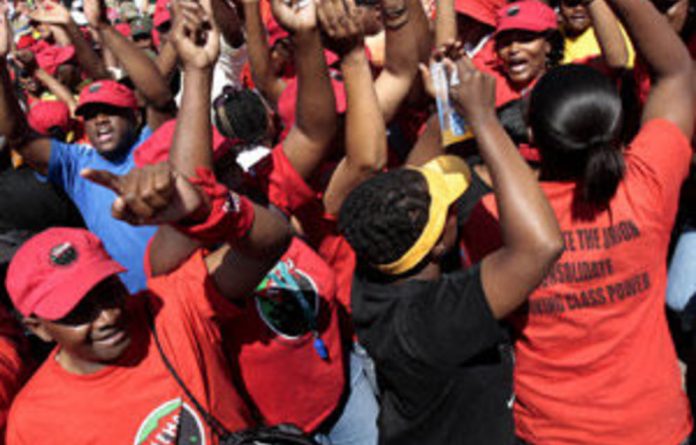 Most of South Africa’s 1,3-million striking state workers returned to their posts on Wednesday as union leaders struggled to persuade members to accept a deal that would officially end the labour action.

“We are facing a serious backlash from our members who object to the union leadership’s decision to suspend the strike,” said a union official who did not want to be named

“Many say we have sold them a dud.”

Union leaders have already agreed to the government’s 7,5% wage increase and R800 a month for housing but have had problems selling the deal to rank and file who demand 8,6% and R1 000 for housing.

The government said it cannot afford to pay any more than it has offered and union leaders have said they feel the deal is a reasonable compromise.

Analysts expect the Congress of South African Trade Unions, which is in a ruling alliance with the ANC, as having enough power to bring a formal end to the strike before the three-week suspension period for the walk-out ends.

No work, no pay
“Historically Cosatu has shown that it has the ability to convince its members and it will be able to sell this deal,” said David Silke an independent political analyst.

“This is a political settlement and any deal will have to see Zuma and (Cosatu’s secretary general Zwelinzima) Vavi come out looking good, even if it is not liked by everyone in the unions,” he said.

Nomusa Cembi, spokesperson for the biggest state worker union, the South African Democratic Teachers’ Union, said members were angry about the government’s offer but most of the teachers in the group were back in classrooms.

Union leaders from National Education, Health, and Allied Workers’ Union (Nehawu), another major group for state workers, were also discussing objections to the offer with members.

Economists believe the labour action has so far cost the economy about R1-billion a day and dampened sentiment about growth prospects for an economy already lagging behind other emerging markets.

Any agreement to end the dispute is likely to swell state spending by at least 1% to 2%, forcing the government to find new funds just as it tries to bring down a deficit totalling 6,7% of gross domestic product.

Under the government’s “no-work, no-pay” policy, most strikers have already lost more from being off the job then they will win in salary gains over the next two years or more under the terms of the government’s offer.