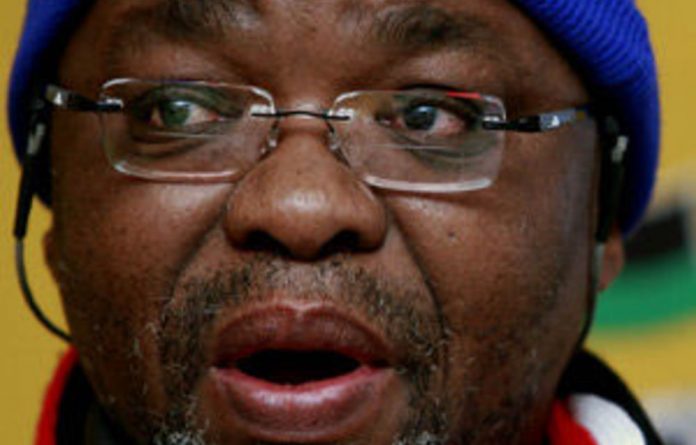 The debate surrounding nationalisation of mines should not be based on an ideological or emotional feeling, ANC general secretary Gwede Mantashe said on Saturday.

“The ANC as a government party cannot pretend like we are a resistance movement in the running of the country and the economy … we must run the economy successfully,” said Mantashe at the ANC provincial general council meeting in Gauteng.

ANC Youth League leader Julius Malema has recently emphasised that the nationalisation of mines was ANC policy, and is pushing for it to become government policy.

Mantashe said there should be a way to ensure that important policy debates such as the nationalisation of mines were not reduced to lobbying instruments.

Policy debate
“Our success in the organisational leadership renewal will alleviate our policy debate from being a new formality and lobbying instrument to genuine concerns to realise an objective of national democratic revolution,” he said.

Mantashe said the argument was not about being against nationalisation but about making the right decisions.

“The argument is that when we take a decision it will be implementable … and not base them on the ideological emotional feeling. We have a responsibility,” he said, leading to a roar of laughter from delegates.

He questioned why the focus was only on the mining sector and not other sectors, such as banking.

Mantashe also criticised the “rising” factionalism within the organisation and voting according to “slates” — a list of candidates standing for the election, aligned to specific sections.

“The fact that we are a product of slates doesn’t make it right,” he said, adding that it was wrong for members who had performed well to be sidelined and ignored because they were in the wrong slates.

Motlanthe said the nature of voting according to slates needed to be rooted out from the organisation.

The practice saw candidates being voted into positions because they were aligned to a specific faction.

At the ANC 2007 Polokwane elective conference there were two slates of candidates, one aligned to ANC president Jacob Zuma and another to former president Thabo Mbeki.

Mantashe and Motlanthe were both elected as part of Zuma’s slate.

Earlier, Mantashe emphasised that the party had been renewed, and urged delegates to raise issues of concern within the structure.

Mantashe also spoke of the danger of what he called the “negative tendency” of power struggles. He said although this should not be the case, it would always manifest itself within the structures.

“It’s about ‘it was your turn last time, it’s my turn
now’ … This negative tendency manifests itself all the time.”

Manthashe said being elected to the leadership gave one massive power in government and in business, and emphasised that this should not be the so.

Quoting Zuma, Mathashe said the pursuit of power, influence and resources undermined the struggle for a better life for all.

“We should ensure that we focus our energy at the NGC addressing these tendencies” he said.

Criticising symbols of the struggle like songs, T-shirts and posters, which were in the past used to unite and mobilise and educate party members, Mantashe said these were now being used to lobby for individuals.

“We are running a risk … this has reflected negatively on our organisation for a period of time.”

They also repeatedly broke out in a song in support of Mbalula, who some in the league want to replace Mantashe at the ruling party’s elective conference in 2012.

But he was quick to say that Zuma being portrayed on T-shirts was “sufficient”.

He also stressed that the national general council in Durban later this month would only discuss policies of the ANC and would not entertain any leadership debates. – Sapa