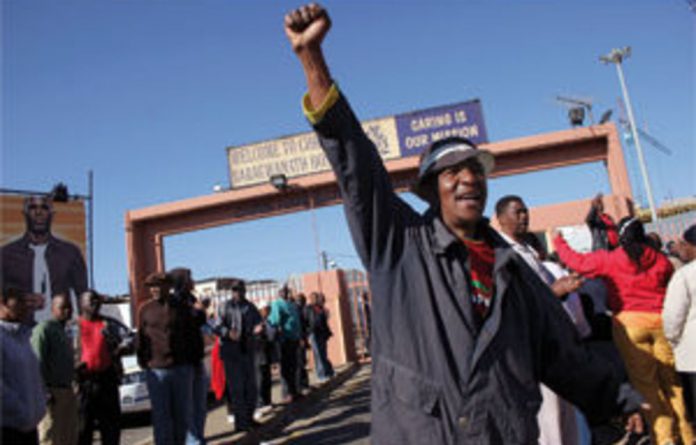 The majority of deaths of children — aged five and younger — in Africa can be attributed to neonatal deaths, malaria, diarrhoea and pneumonia but in South Africa Aids-related diseases are the biggest killers.

In July this year Aaron Motsoaledi, the health minister, said “57% of deaths of children under the age of five during 2007 were as a result of HIV”.

In 2001 one of the eight millennium development goals (MDGs) of the 192 United Nations member states, including South Africa, was to reduce the mortality rate of children under the age of five by two-thirds.

At the UN’s summit last week the goals were reviewed and UN secretary general Ban Ki-moon said that worldwide child mortality is lagging behind because so much effort has gone into eradicating poverty.

“There is some indication we are going down again but we are still miles away from our millennium goals,” said professor Haroon Saloojee, who works in the division of community paediatrics within the department of paediatrics and child health at Wits University.

In a country report, which was tabled at the summit, the South African presidency stated: “While we have best practice policies to enhance the health of children and women, our inherent health system problems, exacerbated by the HIV and Aids pandemic, have resulted in persistently high mother and baby mortality rates.”

But Saloojee said: “I would be hesitant to blame it [the child mortality rate] on HIV/Aids. That cannot account for the lack in child nutrition and child healthcare. It comes down to a gross inefficiency in the healthcare system. It is malfunctional.”

He said that although South Africa has some progressive healthcare policies, something had been lost in translation from paper to practice: “We do have good policy documents, but the ability to implement them is dismal.”

Vuyiseka Dubula, the general secretary of the Treatment Action Campaign, said that underlying health challenges will always affect progress in other areas. “We need to stop the leaking tap that is HIV and TB. If we don’t do that, we won’t meet any of our goals.”

At the summit Ban Ki-moon said the goals are still achievable and called on donors to become involved at next week’s Global Fund Replenishment meeting, at which the UN will seek an additional $20-billion to help meet the global health MDGs.

Dubula agreed that more money is part of the solution, but said it is not the only solution: “We need more money, not just for drugs, but to pay our healthcare workers.”

Saloojee said: “There is no doubt Africa and South Africa can benefit from greater resources. But the spending should be more focused on social services. Within the budget we have no idea what is being spent on children.”

Healthcare is one of the largest expenses in the country’s budget but it is “unlikely that children get prioritised or get a fair share”.

The child healthcare problem identification programme (Child PIP) is a mortality audit tool for children. In a 2008 report, “Every Death Counts “, the programme found that child deaths in South Africa could be attributed to three modifiable factors.

Dr Mark Patrick, the chairperson of Child PIP, said: “Through Child PIP we have an idea of what some of the problems with providing quality care for children are and we have solutions and know what to do.

“But optimally and actually to improve quality of care and to save children’s lives in the South African health system, we need to populate every child health post in the system with talented and caring health workers, who bring into their work, with each sick child, their leadership, advocacy and activist skills.”

Saloojee said there are particular areas of concern, including social determinates, such as hunger, undernutrition and unemployment: “There is not enough focus on these, yet it clearly continues to have an effect on our children.”

He said investments in child healthcare have not been efficient and there is a critical need for competent healthcare workers. Building partnerships, Saloojee said, is an area in which the government is missing an opportunity.

“It has not taken universities on board or NGOs to the extent that it should have. It sees them as in the periphery. Community involvement is also a critical component but the government hasn’t allowed people to engage.”

Healthcare in South Africa is “reactive”, he said. “Things happen and we implement stop-gap solutions. We need to be more innovative and it requires leadership and vision.”

Saloojee and Dubula do not believe South Africa will reach the MDG for child mortality in five years’ time. “No matter what we implement we aren’t going to reach them. But with the appropriate use of resources, and certainly additional resources, we can come close to them,” Saloojee said.

Dubula agreed: “I think if the funding comes we will get closer to the millennium development goals, but I don’t think we will meet them. It will be a progressive step and maybe by 2020 we will get there. But we need the financial and human
resources first.”