Light at end of tunnel for Chile miners 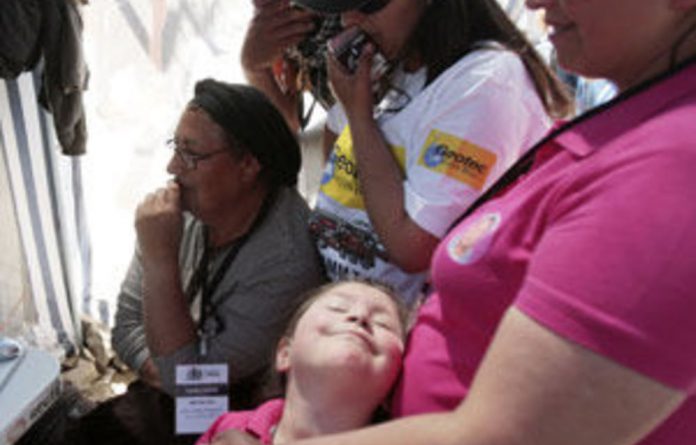 Chile’s 33 trapped miners and their relatives were counting down the hours on Monday as rescuers worked to finish reinforcing an escape shaft to avoid a last minute disaster as their two month ordeal draws to an end.

Engineers expect to finish lining part of the narrow, nearly 625m shaft with metal tubes early on Monday. Then they will do test runs with special escape capsules, and the government aims to start hoisting the men to freedom one by one on Wednesday.

They are installing the tubes to head off the risk of rocks from the side of the drill shaft falling down on to the capsules dubbed “Phoenix” after the mythical bird, and blocking them from reaching the surface.

“I’m so tired. It’s been far too many days doing nothing, just sitting waiting,” said Alicia Campos, whose son Daniel Herrera is among the trapped miners, as she lined up for a fish sandwich at the tent settlement near the mine entrance dubbed “Camp Hope”.

She wants her son to take up another profession.

Mining Minister Laurence Golborne said on Sunday rescuers could start lifting the miners to the surface on Tuesday evening if all went well, as one of the world’s most complex rescue operations and most stunning survival stories nears its climax.

In a land still recovering from a devastating February earthquake, celebrations broke out across Chile on Saturday when the drill broke through 65 days after the August 5 collapse at the small gold and copper mine in the far northern Atacama desert.

Anxiety gives way to joy
After weeks of prayers, vigils and agonised waiting, anxiety is giving way to joy as wives, parents and children count down to reunions with their loved ones.

The men, who have set a world record for the length of time workers have survived underground after a mining accident, have been doing exercises to keep their weight down in time for their ascent.

They will journey to the surface in capsules just wider than a man’s shoulders with their eyes closed and will immediately be given dark glasses to avoid damaging their eyesight after spending so long in a dimly-lit tunnel.

They will be given astronaut-style medical checks in a field hospital set up at the mine. Then they will be able to spend some time with their families, before being flown by helicopter to nearby Copiapo to be stabilised at another hospital.

They are in remarkably good health, although some have developed skin infections.

Health Minister Jaime Manalich said at least two rescuers, one of them a paramedic, would travel down in the capsules to help prepare the men for their journey to freedom.

He said the government had chosen the most psychologically stable and experienced of the miners to be the first to enter the capsules and face the harrowing, claustrophobic journey.

“They have to be psychologically mature, have a great deal of mining experience and be able to handle a quick training on how to use the harness and oxygen mask in the Phoenix capsule,” Manalich said. – Reuters