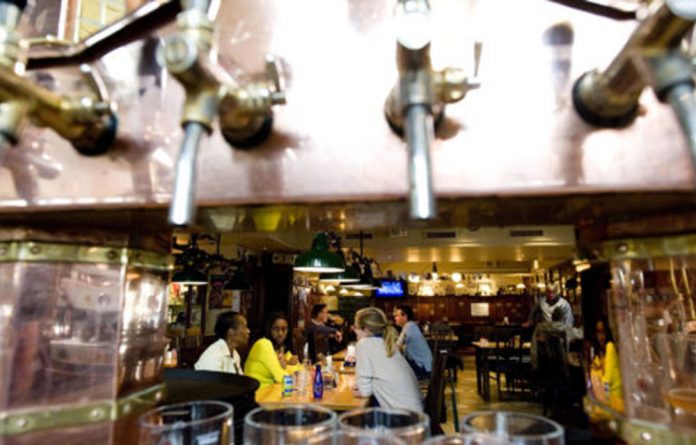 This October marks 20 years since East and West Germany were united.

German politicians prefer to call it die Wende (“the turnaround”) because the word “reunification” is politically sensitive and problematic on historical grounds.

The celebration coincides with the 200th anniversary of that great swilling of beer, the Oktoberfest, when Bavarians (according to the City of Munich’s department of economic development) quaff a mind-numbing seven million litres of the brew.

The beer is quality stuff, unadulterated thanks to the Reinheitsgebot (“purity law”) of 15 16. The only ingredients allowed are water, hops and barley malt.

My first lapse in a Munich beer hall was before the Berlin wall was broken down. Hofbräuhaus was celebrating its 400th year.

It was everything I’d expected — a cavernous hall with an oompah band and 6 000 people shovelling outsize pretzels and sausages. Some had brought their own ornate tankards.

Strangers locked arms and sang lustily, rocking on benches. Blonde, buxom waitresses with pigtails and dressed in dirndls bustled about shouting “vorsicht!” (“caution!”), carrying up to eight giant glass beer mugs at a time. I saw one guffaw good-naturedly when a drunk male patron pinched her plump hams. She didn’t spill a drop.

Earlier this year I returned to Munich’s bacchanalian beer halls. My favourite (for sentimental reasons really) is the Augustiner, originally a monastery.

Nothing much had changed, except now more than half the clientele are tourists, whereas Alpine barmaids are in short supply. Instead, I was served in perfect German by a woman of East Asian and a man of Indian descent.

The Oktoberfest, which started life as a horse race, is a Bavarian event, but it has spread to other parts of the world. Expats and their progeny tend to put regional prejudice aside ­outside the fatherland.

In Cape Town the double-­storey Paulaner Bräuhaus at the V&A Waterfront is more tourist magnet than trap. It has a loyal local following and offers party kegs of beer (up to 30 litres in size) by prior arrangement.

Two impressive giant copper beer kettles stand at the rear of the bar counter — you can see steam escaping every now and again.

A malt mill is visible behind glass. The beer is made on site under brewmaster Wolfgang Ködel. He is brewing up a special batch of 6 000 litres of dark amber-coloured beer for Oktoberfest, which runs here until the end of the month.

The oompah Songscape Bierfest Band and KeeZee, a German-born female singer, will entertain the crowds. The 450-seater outdoor beer garden is partially covered by a Bedouin tent.

The menu is Bavarian and I can highly recommend all their signature dishes. The crusty, dark-crumbed pork schnitzel (R95) is moist and scrumptious inside. It comes with chips, but try ordering it with the traditional-style potato salad (kartoffelsalat) prepared with vinegar rather than mayonnaise.

The nine grilled “Nürnberg-style” sausages (R95) arrive in a pan with mash, mustard and a flavourful sauerkraut fermented to just the right tartness, rich in apple and not too sour.

A ­little-known fact is that Captain James Cook considered sauerkraut one of the secrets to his success on his long voyages.

Under the new ownership of Brigitte Pack and her husband, Gerhard, Dinkel officially launched with Oktoberfest specials. The bakery takes its name from the German word for spelt, an ancient grain. Spelt, also called German wheat, has been grown at least since 4 000BC.

It is noted for its high protein and moderate gluten content. Dinkel makes a 100% dinkel bread. It is light, nutty and tasty. Dinkel uses only stone-ground flours and organic produce.

Among the many baked attractions are sauerkraut bread, Black Forest rye and salty pretzels.

In many ways I feel the Germans have it right. In the beer halls you get excellent fare and lots of it at a sensible price.

There’s something very democratic about their delicious, wholesome and large food — and about beer in general.