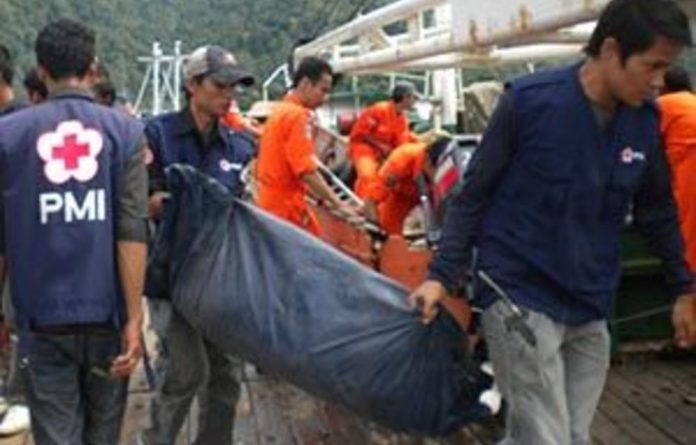 The death toll from a tsunami that pummelled remote Indonesian islands soared to 311 on Thursday as questions mounted over whether an elaborate warning system had failed.

President Susilo Bambang Yudhoyono was heading to the disaster zone, where fears were growing for hundreds still missing after a huge wave triggered by a powerful earthquake on Monday hit the Mentawais off the west coast of Sumatra.

Hundreds of kilometres away, a mass funeral is being held for those killed when the nation’s most active volcano erupted, the second natural disaster to strike Indonesia in as many days.

Disaster response officials said bodies were being found on beaches and coastal areas in the Mentawai island chain, which took the full force of the tsunami as it washed away entire villages.

A ship bearing aid including food, water, medical supplies as well as body bags arrived on Thursday at Sikakap, on North Pagai island, one of the two worst-hit islands in the Mentawai group.

An Agence France-Presse photographer on board said hundreds of villagers were being treated at a medical clinic, many requiring stitches to open cuts suffered as they were tossed around in the surging sea.

‘No warning’
Survivors said they had almost no warning that the 3m wall of water was bearing down on them, despite the laying of a sophisticated network of alarm buoys off the Sumatran coast.

As the magnitude of the disaster became clear, many were asking whether the expensive warning system — established after the 2004 Asian tsunami which killed at least 168 000 people in Indonesia alone — had failed.

An official tsunami warning was issued after the 7,7-magnitude quake but it either came too late or did not reach the communities in most danger.

One survivor, 32-year-old farmer Borinte, said the wave slammed into his community on North Pagai island only 10 minutes after residents had felt the quake.

“About 10 minutes after the quake we heard a loud, thunderous sound. We went outside and saw the wave coming. We tried to run away to higher ground but the wave was much quicker than us,” he said on Wednesday.

He said he managed to stay alive by clasping to a piece of wood. His wife and three children were killed.

Medical personnel were arriving on helicopters but boats bearing aid have been hampered by bad weather around the islands, which are about half-a-day’s ferry ride away from the port of Padang on Sumatra.

Troops and naval personnel had been dispatched to the area. Indonesian western fleet commander Marsetio said at least five warships were on their way.

The United States and several of Indonesia’s neighbours have pledged help for a nation which often finds itself battling calamity, although Jakarta said it did not see a need for foreign assistance.

Volcano eruption
On the central island of Java, rescuers have pulled the bodies of at least 32 people from a tomb of fine grey ash after Mount Merapi erupted on Tuesday.

Officials said more than 50 000 people had fled to cramped temporary shelters around the nearby city of Yogyakarta, but there were fears for the fate of thousands more who had refused to budge.

The slopes of the mountain were an eerie wasteland on Thursday, with houses burnt and flattened, trees scorched and stripped of leaves and the stench of rotting bodies filling the air, according to an AFP reporter at the scene.

Soaring above the rice paddies of central Java, the 2 914m Mount Merapi is the most active of the 69 volcanoes with histories of eruptions in Indonesia. It last erupted in June 2006, killing two people.

Indonesia straddles a region where the meeting of continental plates causes high seismic activity. It has the world’s largest number of active volcanoes and is shaken by thousands of earthquakes every year.