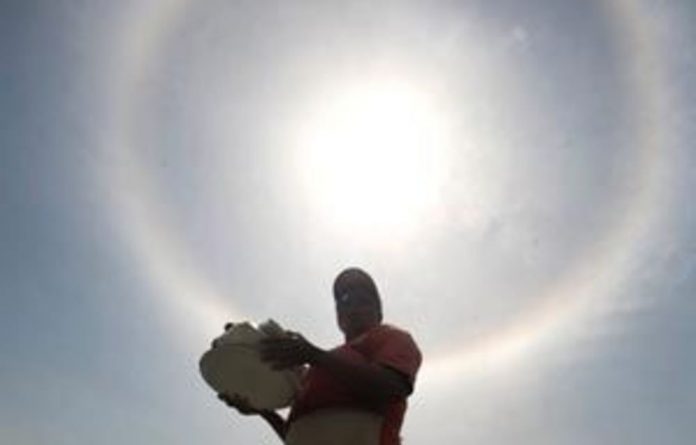 South Africans in northern parts of the country had a brush with the astronomical on Monday when a large rainbow-coloured halo became visible around the sun.

Claire Flanagan, director of the Johannesburg Planetarium at Wits University, said that the phenomenon, known as a sun halo, is not uncommon. “We get calls about it a couple of times a year,” she said.

But on this particular day, the sun halo was seen across large parts of the country and the planetarium was inundated with calls from members of the public wanting to know what they were seeing.

According to the South African Weather Service, the sun halo was visible in Gauteng, Mpumalanga, Limpopo and the eastern parts of North West.

On Monday morning, pictures of the halo circulated via Facebook, Twitter and email, and many people stepped out to take a look at the sun for themselves. But, as with an eclipse, it is dangerous to look directly at the sun and Flanagan warned against doing so during such an event.

“You shouldn’t look directly at the sun because it might cause damage to the eyes. If you want to look at it, you need to put your hand in front of it [the sun],” she said.

Refracted rays
Karl Loots, a meteorologist with the South African Weather Service, said dense cirrus clouds present in the upper atmosphere were responsible for the appearance of the sun halo.

Cirrus clouds are fine wispy clouds. As the temperature in the upper atmosphere is about minus-50 degrees celcius, any moisture these clouds hold would be present in the form of ice crystals. When the sun’s rays shine through these clouds they are refracted — or bent — and the sunlight splits into different colours, exactly as it does with rainbow. This causes the halo, Loots explained.

That explains the sun halo in theory, but in practice it was a regional weather system that caused the phenomenon to occur. According to Loots, the halo could be traced back to a “vigorous storm system” that occurred in Botswana.

“There was thundershower activity in the eastern parts of Botswana, which lead to upper-level moisture being pushed over South Africa,” he said.

This moisture, which took the form of dense cirrus clouds, in turn refracted the sunlight and caused the appearance of the halo.

Other than providing a Monday morning diversion and causing a slight drop in temperature of one or two degrees, the storm systems in Botswana had little effect on South Africa.