The chink in the media’s armour 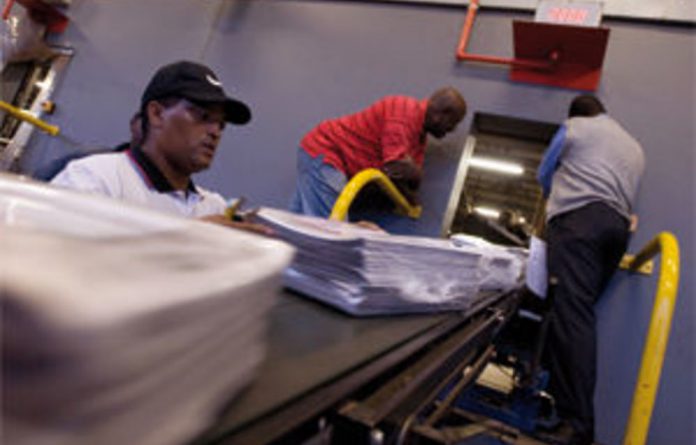 Foreign direct investment, alongside black economic empowerment (BEE), has been hugely important in the transformation of the South African print industry post- 1990.

This was one of the observations in a paper on ownership and content in the print media I delivered at the recent Rhodes University research colloquium on the media debate. The colloquium dealt a lot with media regulation, but there was a
session on ownership.

The ANC discussion document produced for the ANC’s September meeting that proposed a media appeals tribunal is, after all, titled “Media Transformation, Ownership and Diversity”. Ownership has also come up in other attacks on the press, including a piece supporting the tribunal by Jeremy Cronin, the South African Communist Party deputy secretary general, on the SACP’s website.

It has been suggested to me that all the talk of media regulation, including a punitive, statutory tribunal, might just be a stick to beat the newspaper groups to do BEE deals. I doubt this. Resentment in ANC circles about white ownership of the press is not new. It seems to be separate from the even more powerful resentment about the treatment of high-profile ANC politicians and ANC-aligned individuals.

My impression is that BEE alone is not going to fend off a tribunal or whatever other regulatory unpleasantness may lie ahead. Nonetheless, in the battle for freedom of the news media, the racial ownership profile is a chink in the print industry’s armour.

To put it bluntly, half of the four big companies that dominate the newspaper industry have no black ownership at all. Moreover, foreign direct investment, in the form of controlling rather than strategic stakes, is a feature of the press in South Africa.

The Independent group is owned 100% by Independent News and Media . Cronin, in an article in Umsebenzi Online, has singled out the Independent, quoting unnamed journalists as saying the foreign company uses the local subsidiary as a cash cow to pay for its failing newspapers elsewhere in the world and harms journalistic standards through cost-cutting, retrenchment and juniorisation.

It is true that the Independent in South Africa supplied a good chunk of the parent company’s revenue (15% in the half-year to end-June) and profit (22%).

On the other hand, it has founded the only new indigenous language newspaper in recent memory, Isolezwe. It also created The Sunday Independent, though the newspaper has arguably not lived up to its early promise.

Pearson, which owns 50% of BDFM, the publisher of the Financial Mail and Business Day , has been active in South African business journalism education, indirectly leading to the creation of the Centre for Economics Journalism, which I run.

Foreign investment also saved the Weekly Mail‘s bacon and without the Guardian group’s timely investment in the early 1990s you might not be reading the Mail & Guardian today. The M&G is still foreign owned. Zimbabwean publisher Trevor Ncube owns 77.5% of the newspaper company.

More to the point, in the media sector on the JSE, the biggest success story is the Media Group, the fortunes of which are most closely tied up with foreign investment — of the outward kind. Naspers has grown from an Afrikaans Press group into a media multinational.

The ANC document also puts forward a media charter, citing the Marketing, Advertising and Communications Charter and the Information, Communication and Technology Charter. Now that broad-based BEE legislation has established a kind of super charter in the form of the Codes of Good Practice, I don’t see much enthusiasm for charters by businesses.

Charters have to be aligned with the BEE Codes of Good Practice to be gazetted as sector codes. Putting together a charter takes time and energy and the result is usually higher ownership targets than in the codes. The Financial Sector Charter held out the hope of doing something more than simply transferring ownership by increasing access of the poor to needed financial services.

But the gazetting of the charter has been mired in controversy and conflict over bringing in higher targets than were originally agreed to and some banks are said secretly to want to drop it and use the codes instead. So far the members of Print Media South Africa (PMSA) have opted to align themselves with the codes rather than implement a charter.

Nonetheless, it might be necessary to have a charter if, as the ANC discussion document suggests, Parliament puts pressure on the print media in the same way as it did on the advertising industry in the wake of the Human Rights Commission inquiry into racism in the media.

I understand that PMSA is considering the question of what to do about BEE and individual companies have undertaken or are about to undertake BEE initiatives.

The print industry could take a leaf from the retail sector’s book , to which it is similar in not being vulnerable to the direct pressure of government licensing or buying power. Retailers chose to transfer shares to employees and avoid narrow-based BEE altogether.

Naspers’s print subsidiary, Media24, has 15% BEE ownership. Avusa has just boosted its BEE ownership with its recent UHC deal. Independent Newspapers and Media could do an “equity equivalent” deal if it wanted the South African subsidiary to stay wholly owned and managed to persuade the department of trade and industry the company was eligible for exemption from ownership requirements.

Hoosain Karjieker, the M&G‘s chief executive, says the company is looking at an employee share ownership plan (ESOP) of 10%, a lot higher than the standard ESOP of 3% to 4%. Ultimately, it would like to have 25% black ownership in place. That leaves Caxton CTP.

I note that almost 50% of the company is held indirectly and directly by Element One, which wants to sell, and that Caxton founder Terry Moolman has the first right of refusal. Surely this is a BEE deal waiting to happen?

The ANC discussion document talks about “ownership and control”, without spelling out what is considered control or its importance. So far, BEE ownership has not discernibly translated into the kind of control of content of news that we think of when we talk of press barons.

Our newspapers can’t even bring themselves to urge readers to vote for particular political parties. Nonetheless, ownership matters, and we could always use more ownership diversity to see whether it really translates into diversity of opinion.

Which is why it is a pity the New Age is embroiled in some kind of upheaval before even the first edition has hit the streets. Crucially, it is another example of the difference foreign investment, in this case by the Gupta family, can make.

Transformation in an age of compliance

Ironies in Bafokeng platinum mine