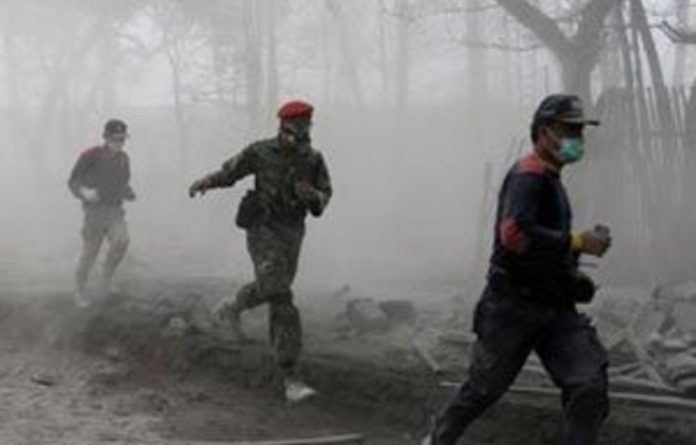 Indonesia’s most active volcano killed 69 people on Friday in its biggest eruption in more than a century, incinerating homes, grounding flights and driving thousands into shelters.

Ash, deadly heat clouds and molten debris gushed from the mouth of Mount Merapi and shot high into the sky for most of the night and into the morning, triggering panic and chaos on the roads as people fled in the darkness.

The latest deaths bring the overall toll to more than 100 since the volcano started erupting on Java island on October 26, a day after a tsunami killed more than 400 people in a remote area off Sumatra island to the west.

The mountain spewed ash over a vast area including the Central Java provincial capital of Yogyakarta, about 28km to the south.

“The death toll is now at 69 including nine children under 10 years old,” said Heru Nugroho, a spokesperson for Sarjito General Hospital in Yogyakarta.

‘They must have been sleeping when the hot ash struck’
Many of the dead were from Argomulyo village, 18km from the crater, according to emergency response officials and witnesses.

“I found three bodies: a child, mother and father, still in their bed. They must have been sleeping when the hot ash struck their house,” rescuer Utha told Agence France-Presse as he delivered 10 bodies to the hospital.

“We also found a dead man with a phone still in his hand.”

Yogyakarta police force medic Teguh Dwi Santosa said: “Argomulyo village has been burned down to the ground by the heat clouds. Many children have died there. When I was in the village the ground was still hot.”

A river running through the village overflowed with a thick mixture of mud and ash, and several bodies lay unclaimed in the debris, witnesses said.

The international airport at Yogyakarta was closed as ash clouds billowed from the 2 914m mountain to the altitude of cruising jetliners and the runway was covered in grey soot.

Officials said the airport would remain closed until Saturday.

Merapi killed about 1 300 people in 1930 but even though the total death toll from its latest series of eruptions is only about 100, experts say they are the biggest convulsions since 1872.

“Judging from the material emitted, Merapi’s eruption this time is bigger than the 1930 eruption,” government volcanologist Subandrio said.

The exclusion zone was widened from 15km to 20km around the mountain and everyone living in the area was ordered to evacuate their homes and shelters immediately, he said.

Indonesia’s transport ministry has told pilots to stay at least 12km away from the rumbling volcano and several flights linking central Java to Singapore and Malaysia have been cancelled this week.

President Susilo Bambang Yudhoyono announced the deployment of an army brigade to help with relief and reconstruction in central Java, as the disaster-prone country struggles to cope with dual natural disasters.

“The military is preparing to deploy one brigade to handle disaster management,” he told a press conference.

Bad weather and poor communications
The 3m tsunami smashed into villages on the remote Mentawai island chain following a 7,7-magnitude earthquake off the coast on October 25, killing 428 people and leaving 15 000 homeless.

Bad weather and poor communications on the undeveloped islands — a legendary destination for foreign surfers — have hampered relief operations.

Three New Zealand yachtsmen who had not been heard from since the tsunami turned up safe and sound, their families said Friday.

The Indonesian archipelago has dozens of active volcanoes and straddles major tectonic fault lines known as the “ring of fire” from the Indian to the Pacific oceans.