Anatomy of a murder 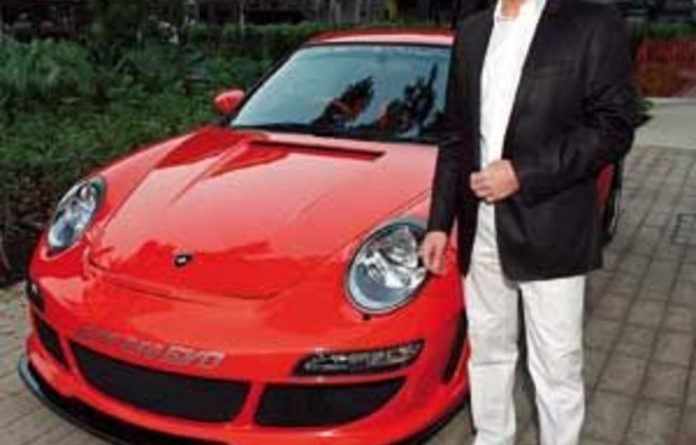 German businessman Uwe Gemballa suffocated to death and died in agony — his mouth and nose were sealed with duct tape and his hands and feet were bound, while his killer sat on his chest during his death throes.

Gemballa was met at OR Tambo Airport on February 8 this year by an unidentified man. He was abducted.

Shortly afterwards Gemballa called his wife in Germany and asked her to transfer €1-million into an account.

Because he spoke in English she was suspicious and alerted the police rather than making the payment. She never heard from her husband again.

The bid to arrest those who ordered Gemballa’s murder is taking a long time, given that on September 27 his killer, Thabiso Mpye, took police to where his body was buried and has cooperated in exchange for a reduced sentence.

Investigating officer Ludi Schnelle is not talking, but an idea of the shape of his investigation is provided by the details contained in Mpye’s plea and sentence agreement, which includes a list of potential witnesses.

Krejcir’s connection with Gemballa is a matter of some dispute. He admits to having met the German sports-car stylist only once, in about 1995, at a motor show in Prague.

He claims he never did any business with Gemballa and disputes the allegations of his (Krejcir’s) former business associate, Juan Meyer.

Meyer, witness number three, runs a gold refinery in which Krejcir was intending to invest.

He claims that the Czech told him he was using cars imported from Gemballa to smuggle cash into South Africa.

In an affidavit Meyer alleges that in September last year he overheard an angry exchange on the phone between Krejcir and Gemballa about money owed to Krejcir.

Krejcir says this is nonsense and insists he legally brought about R100-million into the country via the South African Reserve Bank, so has no need to smuggle. He adds that Meyer’s version is tainted by his own legal problems.

One of Krejcir’s associates, Safi, admits that he contacted Gemballa about setting up a South African franchise of Gemballa’s sports car business.

Safi also states that Krejcir was aware of the proposal and was, with Teazers boss Lolly Jackson (who was murdered), putting up money for the business. Krejcir confirms this.

However, nowhere in correspond- ence between Safi and Gemballa is Krejcir’s involvement mentioned. The correspondence suggests Gem- balla believed he was travelling to South Africa to meet a “Jerome Saphire”, although Safi told the Mail & Guardian that the name Saphire was merely an error by his girlfriend, Tenielle Dippenaar, who typed the correspondence for him.

Both Safi and Dippenaar are listed as witnesses.
Safi said this week that Gemballa was originally scheduled to arrive later in February, and that Krejcir and Jackson were going to pay for the trip.

“I phoned him and said … my girlfriend [Dippenaar], a travel agent, will make arrangements.”

Safi said that later Gemballa phoned back to say he had to come sooner for another meeting.

“He said to me, ‘I’m meeting one of my Angolan partners in SA who I have a franchise with in Angola.'”

Kussumua, the son of the Angolan Welfare Minister, Joao Baptista Kussumua, told the M&G he was not aware of Gemballa’s trip and had not arranged any meeting with the German.

The plea agreement says Mpye assisted “other perpetrators whose identities are known to the state” in kidnapping Gemballa at OR Tambo, after which he was taken to a house at 64 1st Avenue, Edenvale, where Mpye later murdered him.

This house is rented by Savov, who works for the Krejcir family as a “project manager”.

Savov is a Bulgarian who came to South Africa about five years ago. Approached by the M&G at the house in Edenvale, he said the matter was a “little bit sensitive”.

He claimed he spent most of his time outside the country and may have been away at the time of the murder: “I would have to go through the books.”

Michael Arsiotis, witness number 16, is understood to be a Greek Cypriot. Krejcir confirms Arsiotis is his employee.

Witnesses Nicos Katsaris and Colin Sibanda were both associated with the Harbour Fish Market restaurant in Bedfordview, Krejcir’s favourite hangout.

Sibanda is a former waiter at the Harbour.

Witness number two, Etienne Boshoff, is understood to have done training for Krejcir at his Money point gold and diamond pawnshops, though Krejcir denies knowing him.

Krejcir comes out smoking
Radovan Krejcir won’t sit out of sight of his graphite-hued stealth machine, a supercar so souped-up that his associate describes it as “once a Ferrari”.

Casual in jeans, a striped blue designer shirt and two days’ stub-ble, the man the Mail & Guardian dubbed “the mobster at the gates” demands to know why we don’t call him “Radovan the family man”.

Krejcir leaves hardly a gap between his cigarettes, which he does not light himself.

Krejcir’s associate, next to him on the café verandah, passes him lit cigarettes whenever his hands start fiddling with his Coke Lite.

On claims that he had a money-laundering-relationship-turned-sour with German businessman Uwe Gemballa:

“I saw Gemballa once in my life for a couple of minutes at a car show in Prague in 1995 … It was by accident because it was the big car expo and I love my cars, you know what I mean. So I like these toys and I like the conversions for the cars … This is how I met him and the first and last time I saw him, not only saw him, even talked to him. But maybe it is the reason why I want to kill him, because I saw him 15 years ago?

“… If I were in touch with Gemballa, his wife must know, his friends must know, his business partners must know that he’s talking to Radovan or somebody from Radovan. It’s obvious. So let’s speak to these people, ask them if they ever heard about the fucking Radovan. I’m sick and tired of this explanation.”

On his involvement in an agency agreement proposed to Gemballa by Jerome Safi (Krejcir’s cigarette-lighting associate), the deal that brought Gemballa on his fatal trip to South Africa:

“The whole story was that I ended up with this idea from Jerome. He came to visit me and he offered me if I am willing to support financially the business with the conversion of the cars and I told him if he will organise the exclusive contract with Gemballa … I am willing to [invest].

I had the meeting with Jerome for half an hour when he told me this is the opportunity. For this half an hour I have six months’ life in hell from you guys.”

On Gemballa allegedly having been murdered at the home of Ivan Savov, another Krejcir associate:

“What I know about Savov is that he’s a project manager working for a hundred people, actually he’s not working for me, but he’s working for my wife, she’s got the … companies, and Savov what he’s doing only is take care of these companies which belong to my wife, from the account- ant point of view and [legal] point of view… I know Ivan is the family man, is the businessman, is the guy who never will be involved.”

On the many officially named witnesses in the murder investigation connected to him:

“The whole story is from these 27 people I know five, including me.”

“I never, ever spoke with Juan Meyer about Gemballa, that’s a fact and I swear on my son’s life… “So, all of these accusations of Juan Meyer, that I said that I bring money through the cars and money laundering and everything [are false].

“I brought so far to this country R100-million through the Reserve Bank officially … Why I must bring the money through some cars which
I never imported to this country?”