Return of The Voice 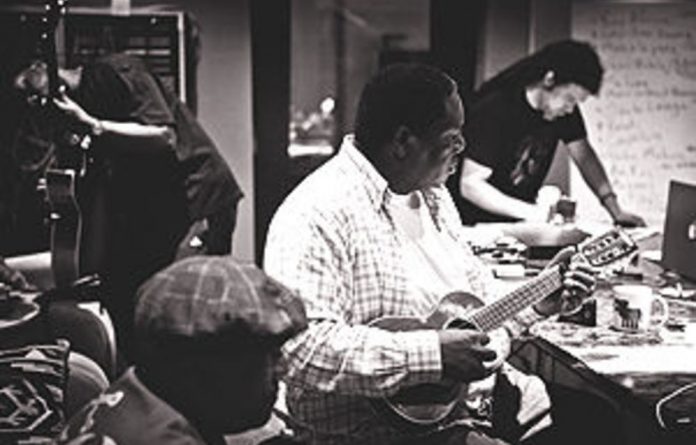 There is a reason Vusi Mahlasela is called “The Voice”. For me it is encapsulated in his classic song, When You Come Back, from his 1992 debut album of the same name.

For many, Mahlasela was the voice of the revolution in the 1980s and it was songs like When You Come Back, which dealt with the themes of ANC cadres and artists returning from political exile, that cemented his position as the spokesperson for a generation in much the same way as Bob Dylan’s poetic songs became anthems for the American civil rights movement.

Now in his mid-40s, Mahlasela has gone on to become a legend of South African music and his latest album, Say Africa (Sony Music), sees Tshwane’s most famous troubadour in exceptional form.

Yet it is no grand political song that offers up one of Say Africa‘s finest moments — it is, in the words of Mahlasela, “a simple love song”, In Anyway.

Well, the song was meant to be “a simple love song”, says Mahlasela, as we sit down to chat about his new album in the office of his record label Sony Music. Then he sent the song’s demo to writer and musician Rian Malan, who made some changes.

“Rian wrote a few lines. For me it was just supposed to be a simple love song that was subtle, but Rian came with really strong lyrics, like ‘your love is a knife in my heart and ice in my veins’, and I was, like, ‘oh Lance [McCormack, Sony Label manager] no, I don’t think I can go with these lines’, but he said ‘no, go for it’.”

The perfect team
The end result is a gorgeous love song built on the basic riff of Mahlasela’s acoustic guitar and some banjo provided by producer and famous American blues musician Taj Mahal, creating a country-blues gem.

Mahal and Mahlasela duet on vocals, two soulful voices complementing each other before a choir comes in at the end to raise the song to the heavens.

I ask Mahlasela how he ended up with Mahal producing his new album. He says he looked for a South African producer, but all the ones he wanted were booked up. “Then the name of Taj Mahal came up and I thought maybe Mr Taj can do this,” says Mahlasela.

“I had the pleasure of playing with him at a fundraiser for Nelson Mandela’s 46664 charity. Since then our bond has been very strong and I discovered that Taj Mahal knows so much about African music and I discovered it even more when we started working in the studio.”

Mahlasela says that when he arrived in the studio, Mahal told him: “Vusi, I want you to do the record you want to do, not what the record ­company wants you to do.”

This is the band who laid down the basic tracks at Dave Matthews’ studio in the United States, before overdubs were done in Johannesburg with some locally based musicians, such as maskandi guitarist George Manxolo, who played guitar on a number of the songs and died last year before the album saw the light of day. The album is fittingly dedicated to his memory.

“I started by recording the demos for the album with my band back here in South Africa and the original idea for the album was for it to be very acoustic, so I thought Ian Herman, Bakithi Kumalo and Mongezi Ntaka would be perfect to do this, but the songs, they really tell you where they want to go and you just need to follow that,” says Mahlasela.

‘What a collection’
And what a collection of songs Say Africa is. From the anthemic nature of the opening track, Say Africa, to the mournful yet beautiful Ode to Lesego, this new album sees Mahlasela trying his hand at many types of songs and even throwing samples of famous South African songs into the mix — snippets of Miriam Makeba’s

The Click Song and Solomon Linda’s Mbube find their way into Woza, a song that Mahlasela first recorded on his 1999 live album with Louis Mhlanga, Live at the Bassline. Then there is a snippet off Shosholoza, which makes its way into Vezubuhle.

“I had this title that I wanted to write a song about, Vezubuhle Africa, meaning show your beauty, through strengthening the kids through education and for God to give us power to find work to work for our children, but also incorporating the story of the men going to the mines to work. The last line where I sing about all the workers coming together for their rights tied nicely in with Shosholoza,” says Mahlasela.

Ba Kae?, which means “where are they”, is a tribute to the Molombo Jazz musicians Philip Tabane, Julian Bahula and Abbey Cindi, all from Tshwane. “I wanted to feature all three of them, but I couldn’t get Philip and Julian, but I got Philip’s son, Thabang Tabane, who plays African drums, and Abbey Cindi, who plays flute on that song,” he says.

Then there is his duet with Benin’s star Angelique Kidjo, titled Nakupenda Africa. “This song was inspired by the Bela Fleck tour I did. There was this guy called John Kitime from Tanzania and, when we did a version of my song, When You Come Back, when we finished the song, he improvised ‘Nakupenda Africa‘, meaning ‘I love you, Africa’, over the last chord and that was the inspiration for the song.

“Ode to Lesego is a poem that was written by a friend of mine, Thabang Chiloane, dedicating this poem to his wife who is late,” says Mahlasela. “I felt very strongly that I should also pay tribute by taking Thabang’s poem and putting it to music.”

After Mahlasela has finished giving us a rundown of his new album, he tells the Mail & Guardian that he is jetting off to perform at a tribute show in New York for John Lennon the next day and then on to play as a guest with long-time friend Dave Matthews — the life of a famous international touring musician.

He says he will be back in South Africa in late November to perform some shows before his album receives an international release on January 18 next year, when he will be launching a world tour in support of the album.

The Voice has returned and not a moment to soon.