Why does Jackass kick ass? 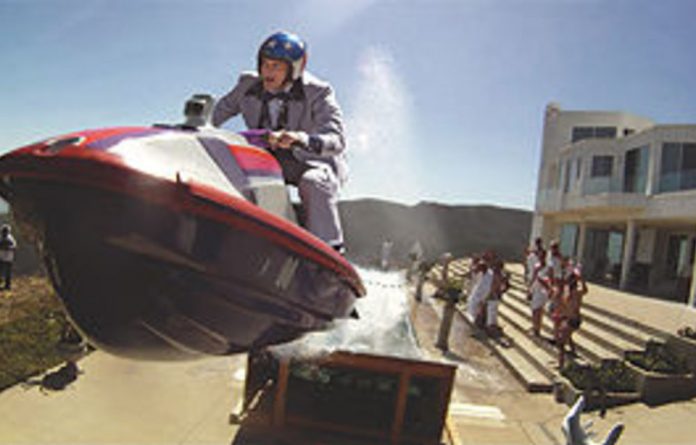 It should come as no surprise that within minutes of our meeting, Johnny Knoxville is talking about his penis. More precisely, how he broke his penis three years ago in a motorcycle stunt that went wrong.

It’s a war story the Jackass star has often told, so the gory details don’t need repeating suffice to say, he has to self-administer a painful-sounding procedure twice daily that wouldn’t look out of place in the latest Jackass movie.

The point, though, is that it’s impossible to imagine having this sort of discussion with anyone else. Just as it’s impossible to think of any other mainstream movie in which bodily fluids are liberally ejected and ingested, male nudity is so liberally on show, or the human body is so routinely and genuinely abused.

The joke was supposed to have run its course several years ago, after three TV series, two movies and numerous spin-offs, and we were all ready to write off Jackass as a Noughties anomaly, to be filed somewhere between extreme sports and gross-out comedy.

But last month Jackass 3D surprised everyone by breaking United States box-office records — it has now taken more than $100-million in the US alone.

Somethings remain the same
The 3D gimmick and some effective high-definition, super-slow motion stunts are just about the only things that appear to have changed. Otherwise, Jackass 3D is slapstick masochism as usual: YouTube-size chunks of genital self-injury, “don’t try this at home” stunts, street pranks and peer-group humiliation and revulsion.

And, as always, Knoxville is master of ceremonies: part Southern charmer, part carnival barker, laughing maniacally as his colleagues writhe in pain. And taking a fair share of it himself.

“Everyone gets hurt, but I’ve probably had the most injuries — blunt-force trauma,” he says. Medical terminology is now second nature.

Knoxville might be at a loss to explain the movie’s success, but Jackass’s resurgence has prompted serious critics to reassess its cultural significance, if only to justify the fact that they secretly enjoyed it all along. Last month Jackass 3D was screened at New York’s Museum of Modern Art, for example.

MoMA curator Louis Siegel positioned it as “the climax — or the lowest depths if you prefer” — of a cinematic tradition of laughing at the misfortune of others that reaches back to the Lumière brothers, Auguste Marie Louis Nicolas and Louis Jean, playing pranks on their gardener with a hose in 1895.

Extreme performances
Others, including the show’s long-time producer Spike Jonze, liken Jackass to extreme performance artists such as Chris Burden, whose notorious 1971 piece, Shoot, consisted of someone shooting him in the arm with a rifle (Knoxville’s first Jackass stunt was to test a range of self-defence weapons on himself, such as pepper spray and tasers — an electric shock weapon).

It is not too much of a stretch to link Jackass to bodily fluid artists such as Andres Serrano or Todd McCarthy, the self-harming experiments of Marina Abramovic and Joe Coleman, the shock tactics of Antonin Artaud’s theatre of cruelty, and — particularly — the 1980s New York “cinema of transgression” movement, whose manifesto promised: “There will be blood, shame, pain and ecstasy, the likes of which no one has yet imagined.” Jackass is so basic in its conception, so pure in its puerility, it’s impossible to pin down.

One category Jackass fits into surprisingly well, though, is gay pornography. Knoxville and Co are all heterosexual, but their peculiar brand of male nudity, intimacy, scatology, self-harm and general fascination with the male crotch makes for distinctly fetishistic viewing at times. Like, say, when Knoxville is flying a remote-controlled helicopter attached by a string to someone else’s penis.

Far from being touchy about Jackass’s latent — or rather blatant — homoeroticism, Knoxville positively celebrates it. “John Waters once called us the gayest straight guys of all time — which I’m very pleased about,” he says.

Knoxville is a regular fixture in the gay press and has spoken out against homophobia and recently introduced a screening of Jackass 3D to a bar full of leather-clad “bears” in Los Angeles. The same week he was seen carving Halloween pumpkins with Martha Stewart on her daytime show.

“Just having fun”
When it comes to interpreting Jackass in terms of models of masculinity or avant-garde art movements, though, Knoxville is not particularly interested: “Nobody gives a shit. We’re just having fun. We don’t intellectualise it like that.”

If Jackass has any intellectual root, it would be gonzo journalism, Knoxville says. He came to Los Angeles from Knoxville, Tennessee, in his early 20s (hence the moniker; his real name is Philip John Clapp). Like many others, he was an aspiring actor living the lifestyle of a successful actor.

“The biggest thing that got me doing anything was the birth of my daughter,” he says. “I was waiting tables and my girlfriend, who became my wife … who became my ex-wife … was pregnant, and I was like, ‘Oh fuck, I really need to do something. I’ve just been, like, drinking and partying the whole time here’.”

He started writing for magazines, including seminal skateboarding title Big Brother, one of whose editors was Jeff Tremaine, future co-creator and director of Jackass. Tremaine commissioned Knoxville to write about tasering himself. “I was reading a lot of Hunter S Thompson at the time — participatory journalism-type stuff,” Knoxville says. “I thought maybe I’d give that a shot. It was my feeble attempt at trying to write like Hunter, which no one can.”

Tremaine wisely advised him to capture the experiment on video. A year later, Jackass was airing on MTV.

The success of Jackass opened up a genuine acting career for Knoxville. He is leading-man material — hip, handsome, charming — and even if the movies weren’t always stellar (The Dukes of Hazzard) he was generally well received in Grand Theft Parsons, John Waters’s A Dirty Shame, Men in Black II and others.

He looked all set to leave behind his juvenile entourage and join the Hollywood A-list. “Yeah, and then I stopped,” he says, laughing. “I just didn’t like the things that were being sent to me. And I was going through a divorce during that time and I just … decided to sit out for a while.”

Easy money
Surely acting is easy money compared with standing in front of a charging bull? “No, Jackass seems like easy money,” he says. “I love acting and I’m super lucky to be able to do it, but making Jackass, I couldn’t wait to get to set every morning. I would wake up at 6.30 and just start writing.

“The stunts are – whatever, you’re gonna get injured probably, but I just love it.” The stunts are one thing, but the friendship between the principals is also key to making Jackass work — and neither of them can be faked. The relationships, as well as bodies, have been tested to breaking point.

Having confessed to his fear of snakes, for example, Knoxville’s co-star Bam Margera is subsequently dropped into a pit of them by his so-called buddies in Jackass 3D. If Margera didn’t eventually see the funny side, you could easily classify that as psychological cruelty.

They’ve all been through so much together in real life, though, says Knoxville, including alcoholism, drug addiction, abusive relationships and ­mental-health issues.

“There was a great spirit about this one. The camaraderie between the guys was great in the first two movies, but this one was really special. You can tell we’ve been together 10 years, and we’re a family. People have kind of grown up with us now.”

Not that growing up appears to be any higher up the Knoxville agenda. He’s nearly 40 now, with a 16-year-old daughter and a 10-month-old son. He’s greying at the temples and darkening around the eyes and moves a little gingerly at times. Isn’t he getting too old for this stuff?

“Man, we were too old when we started,” he says. “After the first and second movies, we said, ‘We’re done’. Now we’re not making any more predictions about Jackass. We shoot every one like it’s our last.” — Guardian News & Media 2010