Africa’s health up in smoke 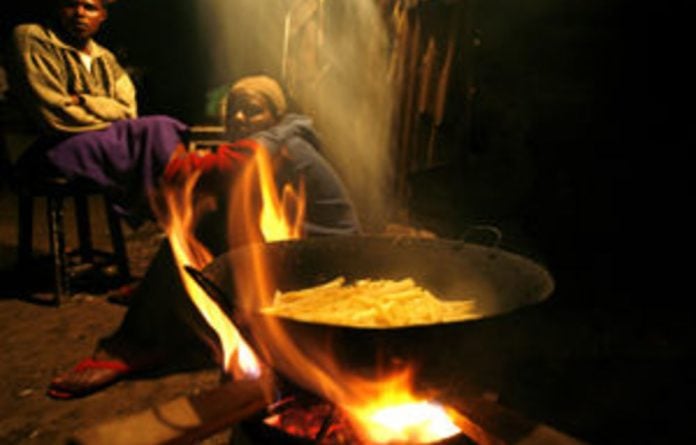 Household smoke will be the leading cause of premature death by 2030 if sub-Saharan governments do not create far greater access to electricity than is embodied in their current policies.

Household air pollution already kills more people than malaria and TB in sub-Saharan Africa and in 20 years it will kill more people than HIV/Aids, said Gisela Prasad of the University of Cape Town’s Energy Research Centre.

She was speaking at the African Science Academy Development Initiative’s (Asadi’s) sixth annual conference in Somerset West in the Western Cape last week.

The Academy of Science of South Africa (Assaf) and science academies from Cameroon, Nigeria, Uganda, Ghana, Senegal and Kenya comprise Asadi, which was launched in 2004 to strengthen African academies.

“The killer in the kitchen will produce the greatest number of deaths in the future. We have to do something,” she told the Mail & Guardian during the conference, which focused on access to energy.

Access to energy for cooking is dismal in many countries in the region and even more so for poorer people who cannot afford electricity, Prasad said.

People opt for “biomass”, that is, renewable resources such as wood, waste, hydrogen gas and alcohol fuels, because it is cheaper and, in some cases, free.

“More than 50% of rural South Africans still use biomass and they don’t know how dangerous it is,” Prasad said.

Government should urgently provide rural dwellers with safe cooking stoves that cost about R175 each. “Less smoke escapes compared with open fires and this can save many lives,” she said.

Prasad told the conference that increased access to electricity was feasible, citing examples from Mauritius, Botswana, Zimbabwe and South Africa. In Mauritius electrification had been a policy priority even before the country’s independence in 1960, she said.

In Botswana the national power corporation connected households on a cost-recovery basis and rural customers apply for loans for their electricity connections.

And in Zimbabwe the rural electrification agency targeted rural growth centres in which local government infrastructure, such as agricultural extension, health services, schools and police stations, were concentrated, Prasad said.

“South Africa subsidises electricity connections and, under the national electrification programme, access to electricity is affordable for urban and rural poor,” she said.

This year’s Asadi conference aimed to engage senior African policymakers and planners in the sub-Saharan region on new energy programmes and policy directions.

Science and Technology Minister Naledi Pandor, her deputy Derek Hanekom and the department’s director general, Phil Mjwara, participated in some of the conference’s proceedings.

Its other objectives included:

“The policy situation is better than before,” said Assaf executive officer Roseanne Diab. “Regulation is also easing up and our governments are making policies that are enabling the implementation of changes.”

The extent to which representatives of regional government and science academies engaged with one another was a major talking point, delegates told the M&G.

Seth Danso from Ghana said the participation of government representatives was a signal that policymakers were ready to embrace the knowledge produced by academies.

“Academies need to do all they can to engage their governments and show them evidence. In that way they will be compelled to take up our recommendations,” he said.

Ugandan delegate Albert Rugumayo said improving engagement between academies and their governments was a work in progress, but academies were getting there.

Rugumayo was happy about the evident engagement between the academies and some government departments at the conference.

“Being proactive is a good thing and it will improve the uptake of our recommendations by our different governments,” he said.

But the academies themselves have to take a greater initiative, said Nqaba Ncgobo, the chairperson of South Africa’s science and technology portfolio committee. They are not visible enough, not well coordinated and seldom send their report to the right policymakers, he said.

“They need to be proactive in their approach to policymakers.”

More people in sub-Saharan Africa will be without access to electricity in 2030 than there were in 2006 if the region’s governments do not take action now, a report by science academies says.

The report, Turning Science On: Improving Access to Energy in sub-Saharan Africa, says electrification rates in the region during the 1980s were equivalent to those in other developing regions. But higher population growth since then, combined with poor maintenance of power supplies and only a 3% increase in new infrastructure, means that increasingly fewer people in the region have access to electricity.

The African Science Academy Development Initiative (Asadi) released the report at its sixth annual conference in Somerset West in the Western Cape last week. The publication includes statistics from non-Asadi member countries such as Zimbabwe, Mozambique and Mauritius.

Inadequate maintenance of power supplies in the region means that up to a quarter of the region’s total on-paper power supply is unavailable, the report says. Even the theoretical total supply compares poorly by international standards: at 68GW, it is equivalent to Spain’s total installed power supply and is only 10% of Latin America’s.

Access to energy in sub-Sahara is “dismal”, the report says, offering the following statistics:

The report suggests that governments develop policies and guidelines to integrate renewable energy into the national energy mix and into their rural electrification plans. They should lobby for the inclusion of a ninth millennium development goal related to energy access.

Speaking at the launch of the report, Science and Technology Minister Naledi Pandor said that in sub-Saharan Africa only 30% of the population (about 285-million people) had access to electricity — the lowest figure in the world — despite the continent’s significant oil, gas, hydro and renewable energy resources. “This must tell us that there is something wrong with the way we manage our resources,” she said. “We produce oil, then send it out for refinement, and then have to purchase it back at an even higher cost. We have to address that conundrum.”

Academy of Science of South Africa executive officer Roseanne Diab told the Mail & Guardian that although “energy underpins every millennium development goal, there is none specific to energy”. Policymakers in governments that endorsed these goals in 2000 must address this, she said.