My neighbour, the mine dump 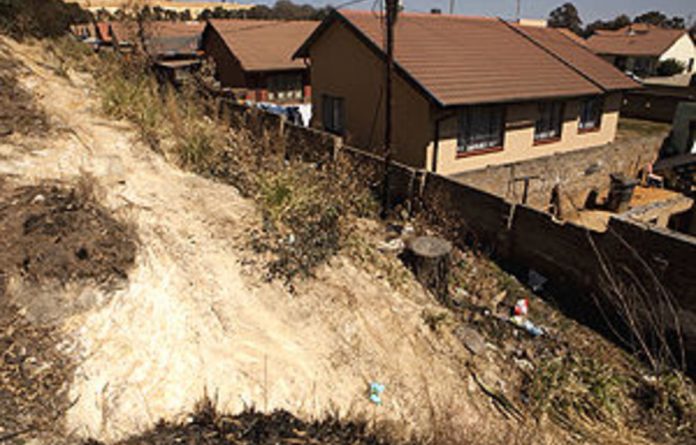 The threat to Soweto

I first met Israel Mosala in a small greenhouse tucked away in a corner of Joubert Park in Johannesburg’s notorious Hillbrow district.

I’d scheduled a meeting with EarthLife Africa, a non-profit organisation driven by a small but dedicated group of volunteers and one of the first to voice concern about acid mine drainage (AMD).

Mosala was late. He shuffled in apologetically and took a seat without meeting my eyes. His body was thin and energetic and he was dressed in tight-fitting jeans and a tucked-in T-shirt. I asked him where he was from. “Meadowlands. Soweto,” he quietly replied, his head still bowed.

As we drove there together, Mosala told me that it was the constant presence of mine waste in his home area that spurred him into action and thrust him into his work — leading educational activities supported by EarthLife.

Soweto is host to several large mine dumps and the Klip River, which snakes through the suburb, polluted by sewage, garbage and mine waste.
On windy days parts of the area are shrouded in mine dust and become nearly invisible.

Pools of acid water from Gauteng’s Western Basin — where it has been accumulating in empty mine shafts, reaching the surface and polluting waterways since 2002 — lie beside the busy Elias Motsoaledi highway, a stone’s throw from the densely populated Braamfischerville and the new RDP development, Sol Plaatje.

According to a test done for the Mail & Guardian, the water has a pH, a measure of acidity, of 2. Safe water, or what scientists call neutral water, has a pH of 7.

Concerns that Africa’s biggest city could be seriously affected by AMD have turned attention away from the fact that the area that houses two-thirds of Johannesburg’s population is already living with acid water.

Holy water
To visit the Klip River at a weekend is to visit a pulsing, teeming church. Before even seeing the river, passersby can hear drums and singing.

Throngs of worshippers line the water. They are in different positions and states of meditation. The atmosphere is calm and serene, with libations and prayers taking place from sunrise to sundown.

Men and women of all denominations show up on foot or packed into cars, with family, friends, or individually, to pray and have their souls cleansed by the Klip’s cold, forgiving water.

Simpiwe, a young sangoma who will not give his surname, said the water can help with many ailments. “We believe that water cleans everything — If there is cancer, you’ve got bad luck, spirits are hurting you, then you come here to cleanse — There are spirits which are flowing here.” The Klip embodies more than just the substance that it holds.

“When a person is born, they are inside the water,” said Simpiwe. “Water is very important because it protects you from the tummy of your mom. The nurse used — water to wash you. When Jesus was baptised, he went to the River Jordan and John baptised him there.

We are using the water to wash ourselves, our clothes, even looking after the plants. Water is very important.” But the Klip River is dying.

A test of water from a leaking pipe coming from the operation, which is next to a wetland, showed a pH of 2.

But both companies maintain the river is not being affected by their work. DRD Gold said an investigation was undertaken which found that no irregular spillage is taking place at the site.

In an email from Central Rand Gold, the company said: “[Our] operation is based approximately 5km away from the New Canada Dam — We run a closed circuit and don’t discharge any water outside of our mining area.”

An analysis conducted by Waterlab, an independent water-testing company, on behalf of the M&G, showed the Klip has a pH of 4,9, with elevated levels of iron and manganese, both by-products of AMD.

According to Louis de Wet of Waterlab, who conducted the tests, these rates “do not conform to standards for potable water and I am sure aquatic life will not do well there.

These tests indicate that there is acid mine drainage present.” But pin-pointing the source of the pollution is difficult — the Klip could be contaminated by effluent seeping from the mine dumps and/or from current or former mines in the area.

Regardless of the origin of the pollution, Edwin Taolana, a Soweto resident, is concerned about the water’s use in traditional medicines.

“They say it’s red water, that it’s a cure. And even — I used to use it. But then, when I found out about this, I said ‘we’re killing ourselves’ — We know people that are dying of cancer. People get sick from this — If the water makes a tin get rust, what will happen to your kidneys?”

Despite the presence of mine waste, many residents are unaware of the potential dangers of a degraded environment.

“At first I thought it was something that we could be proud of, that we were next to the [mine] dumps. It’s like an emblem,” said Taolana. “But now I’m worried because this thing is going to affect us — We’ve got people who have cows here, and they’re drinking the water that comes from the tailing, and they’re irrigating with that water. Directly or indirectly it’s affecting us because we buy our vegetables here.

“People are clueless that they are sitting on top of a ticking bomb. They don’t know it. They’ve got other things to worry about, like no houses, no jobs, no food, poverty — To them, it’s just a normal thing.”

When I meet Mosala again he is talking to residents about AMD on the banks of the Klip. He compares their apathy with the denial during the early days of the Aids epidemic.

“They used to call Aids American ideas used just to discourage sex. But when it started happening to people next door, then they believed you,” he said. “It’s the very same thing with acid mine drainage. There are very few cases where you can actually see the effects of mining. They just won’t believe you until they see it.”

According to Mosala, a lack of education and limited options fuels a culture of ignorance.

“[People] do make comments like ‘the dust, the dust’, but they usually don’t take the next steps, because they don’t have the resources —
“Before I was informed about this, I used the water. I heard about this on the TV and in the paper and I heard about cancer rates and then I became informed and I decided I must ­educate people.”

Given that mining companies and the government share responsibility for the creation and clean-up of mine waste, Mosala said that they must both play a larger role in educating those most affected.

“You need to know that if you partake in certain activities it will impact the environment and your health,” said Mosala.

“Maybe the government can come to their senses and do something, because people need to be educated — They should educate people on radio, on TV, put [information] in pamphlets, put it in placards next to hot spot areas.”

This piece is part of a series on acid mine drainage. For more on AMD, visit http://www.mg.co.za/amd. This project was made possible by funding from the Open Society Foundation for South Africa’s Media Fellowship Programme