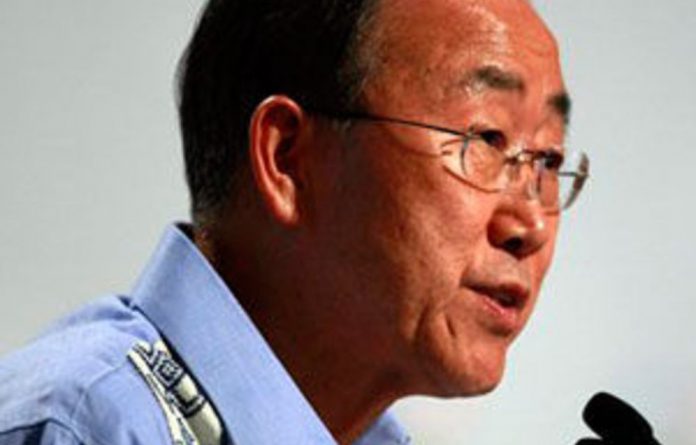 United Nations Secretary General Ban Ki-moon warned on Tuesday that the world was missing its last chance to control climate change, appealing to nations at talks in Mexico to ramp up progress.

In an emphatic address to the 194-nation talks, the UN chief highlighted studies by scientists who say the world has a limited gateway to cut carbon emissions or risk irreversible damage to the planet.

“I’m deeply concerned that our efforts so far have been insufficient, that despite the evidence and many years of negotiation, we are still not rising to the challenge,” Ban said as the two-week talks entered the final four days.

“Business as usual cannot be tolerated,” he said. “Cancún must represent a breakthrough.”

“The world, particularly the poor and vulnerable, cannot afford the luxury of waiting for the perfect agreement,” Ban said, adding: “Every country can and must do more.”

Building blocks
Host Mexico has encouraged nations to look for building blocks to an eventual climate accord, hoping to undo some of the damage from last year’s Copenhagen summit, which disappointed many environmentalists.

To the surprise of some of the hardened negotiators, the talks have appeared to bear fruit with a compromise eyed on one of the key stumbling blocks — verification of nations’ promises to fight climate change.

China climbed down from its past refusal on verification after India drafted a compromise under which all countries responsible for more than 1% of emissions would submit to verification but not face “punitive consequences”.

“It does represent progress,” US lead negotiator Todd Stern said.

The draft is “definitely not adequate yet, but it’s a step in the right direction. If we can keep moving a few more steps, we might actually get there,” Stern said.

But Stern warned that another dispute remained “very tough” — on the future of the Kyoto Protocol.

With few expecting a new fully fledged treaty anytime soon, the European Union has led calls to extend the Kyoto Protocol past the end of 2012, when requirements under the landmark 1997 agreement are set to expire.

The EU position has triggered protests from Japan. It says Kyoto is unfair by not involving the two top polluters — China, which has no requirements as a developing country, and the United States, which rejected the treaty in 2001.

“It is absolutely imperative that we deliver something, something substantial,” EU Climate Commissioner Connie Hedegaard said. “To come out of Cancún with nothing is simply not an option.”

Even if countries carry out pledges they have already made, they are off track to meet the goal agreed in Copenhagen to check rising temperatures at two degrees Celsius compared with pre-industrial levels.

“There is a giant gap. We need to acknowledge and commit to close that,” said Alden Meyer of the Union of Concerned Scientists, an environmental group.

The US Congress looks unlikely to approve any restrictions on carbon emissions after the Republican Party’s victory. President Barack Obama’s administration, however, has pledged to meet its Copenhagen target of cutting emissions by 17% by 2020 from 2005 levels.

‘You are not protecting our Mother Earth’
The Cancún conference is also making progress on how rich nations can help in reducing emissions from deforestation in developing nations — known to negotiators as REDD.

The loss of trees accounts each year for 12% to 25% of the carbon emissions due to the loss of vegetation that counteracts the gas.

Activists and negotiators from several Latin American nations have pressed against a deal out of suspicion over calls to set up a market, in which nations would offer forest aid in return for credit to meet their climate goals.

Thousands of activists and Mexican peasants, holding rainbow flags and playing drums and flutes, marched in central Cancún, many of them to reject the REDD deal.

“REDD is a false solution because you are creating a market on our forests, you are not protecting our Mother Earth,” said US activist Kari Fulton.

“We are standing here to say that we want protection and to be respected,” she said. — AFP