How to fix an impossible mess 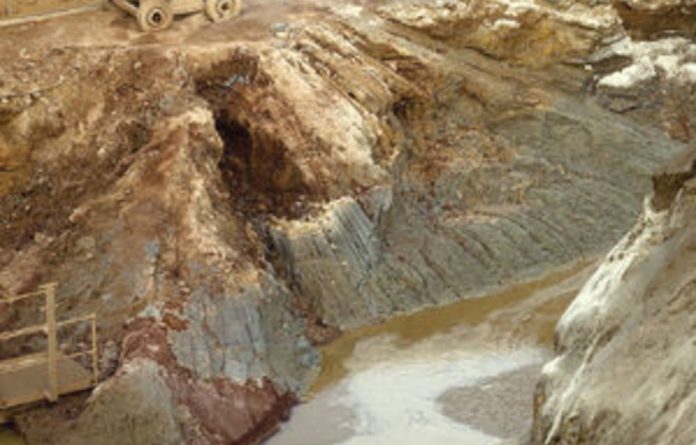 The problem of acid mine drainage (AMD) is an overwhelming one.

Johannesburg is under threat of being flooded with polluted mine water, rivers and streams are being flushed with tons of potentially toxic and/or radioactive uranium and wetlands have been devastated, leaving little life behind.

In response to the millions of litres of acid mine drainage already flooding or threatening to flood South Africa’s streams, rivers, cities, and towns, a variety of solutions have been proposed with varying degrees of effectiveness and cost. Actually implementing these solutions, however, takes political will, enforceable liability, time and money.

As South Africa’s AMD problem worsens, technology providers from government, the private sector and academia have all tried to find solutions.

Although they vary in cost, effectiveness and technicality, all aim to reduce sulphur and heavy-metal content while increasing the water’s pH, changing pollutants from acid into neutral water, which can be safely consumed.

Since 2002, the Aveng Group has led the pack, cleaning water in a plant jointly commissioned by Anglo Coal and BHP Billiton in eMalahleni, Mpumalanga.

Daily, 25-million litres of water — the equivalent of 10 Olympic-size swimming pools — are treated at the Anglo-BHP Billiton plant, with the Optimum plant able to treat 15-million litres a day. But this highly effective treatment isn’t done without a price — and a hefty one at that. Optimum’s plant cost R550-million to build, with Anglo-BHP spending R300-million on theirs in 2002.

“Treatment is expensive, but if you have a viable business and your business threatens to be closed down, then you have to weigh the costs and benefits,” says Vik Cogho, group health, safety and environmental manager for Optimum Coal.

In 2006 the site, at the time still owned by BHP Billiton, received a general directive from the department of water affairs to stop discharging mine-affected water into the downstream environment.

Because of dwindling water storage capacity and to retain its licence to operate, Optimum Coal, formed in 2008, began including water treatment as part of its long-term sustainable water management strategy. But the situation in Gauteng’s largely derelict goldfields presents a different scenario.

After 120 years of mining, the Witwatersrand now hosts only a few active operations, which sit on top of a mass of contaminated water they did not create.

“The problem [in the Witwatersrand] is that there are old, defunct mines, and the liability lies with the government,” says Cogho. “Individual companies are unlikely to pay for this.”

In response to the Western Basin flooding with AMD, government called upon the gold-mining industry to find a long-term, sustainable solution, threatening to withhold coveted closure certificates if this was not done.

As a result, a conglomerate of mines formed a Section 21 company, which tasked the Western Utilities Corporation (WUC) — partially funded by the Industrial Development Corporation, the Development Bank of Southern Africa and the mines — to search for appropriate technology.

WUC, using the Centre for Industrial and Scientific Research’s technology, approached government about selling treated water to Rand Water, claiming that it needed a buyer in order to make the process economically feasible. But Rand Water said it needed the endorsement of the department of water affairs to do so, which the department has refused to give.

In the hope of securing an agreement, WUC became 60% black-owned and the company also proposed a public-private partnership with government in June, which would also include a large black economic empowerment component. To date WUC has received no response to this proposal.

While the department of water affairs refused to speak to the Mail & Guardian, several well-placed sources noted that negotiations failed because WUC would be making money off the sale of treated water.

The ‘polluter-pays principle’
Although the Anglo-BHP Billiton plant provides much-needed treated water to the eMalahleni municipality, which is running out of clean drinking water, this is done at a loss to the companies, which sell below cost. This is because of the polluter-pays principle within the New Environmental Management Act (NEMA).

“Innate in the polluter pays principle is that he or she who pollutes shall not profit from the pollution,” says Richard Doyle, managing director of Earth Metallurgic Solutions, a new company working on AMD treatment. “These mines can’t make money by selling their treated water at a higher price to the public.

They can’t make the taxpayer pay a premium for what they could get cheaper elsewhere.

“However, there’s a huge difference between what’s happening here and what’s happening in the coal fields,” says WUC managing director Jaco Schoeman. “In Mpumalanga, we know that Anglo Coal and BHP Billiton created the mess. But in the Witwatersrand, you can’t trace the pollution to a specific owner, so no one mine can be held accountable to treat the water.

“[The government has the] perception that we’re trying to privatise water, which is against the Constitution, but how do you expect us to put a solution in place and not sell the water?” asks Schoeman. “You have to make a profit to do proper maintenance of your plant so that the quality of your water is high.

If the idea is to set up an entity that’s not going to make profit from this water — then it’s going to have to be a fully funded state project.”

According to Mariette Liefferink, chief executive of the Federation for a Sustainable Environment, not allowing mining companies to sell water at or above cost, which deprives them of the opportunity to at least break even, is a disincentive for available technologies to be employed.

“If [mines] aren’t allowed to sell water, then who is going to pay for this? It’s expensive and it has to be done. If the government paid, it would place too much of a burden on the taxpayer, and the government has been slow to respond — The WUC approach isn’t perfect, but for the moment it’s the best we’ve got.”

In order to address complex issues of liability such as those marring effective solutions to Gauteng’s AMD, some experts advocate using creative funding mechanisms to provide capital for ownerless and abandoned mines, of which there are over 6 000 nationwide.

The United States’s Superfund, which takes money from industry and government to pay for orphaned environmental disasters, provides millions of dollars annually to remedy some of the country’s most hazardous waste problems.

This model could be applied in South Africa, where a tax could be placed on all operational mines to ensure that money would be made available to clean up historic pollution.

“Superfund would be the ultimate solution,” says Melissa Fourie, executive director of the Centre for Environmental Rights. “New companies should pay into a fund to care for old companies’ closed mines.” In addition to cleaning up contaminated water, the fund could be used to remediate thousands of potentially dangerous tailings dams around South Africa.

Optimum’s Cogho believes that such a fund should be administered in a transparent and inclusive manner. “If one looks at the current track record of our regulator — then it’s doubtful whether it will be successful and whether it will be used appropriately.”

This is the last in a series on acid mine drainage. For more on AMD, visit www.mg.co.za/amd. This project was made possible by funding from the Open Society Foundation for South Africa’s Media Fellowship Programme

Kampala’s good for a gander

The magic of Maputo

The bar that caused all the trouble in historic Bo-Kaap

Bold land of baklava and bazaars.