‘We too have a dream,’ say UFS students 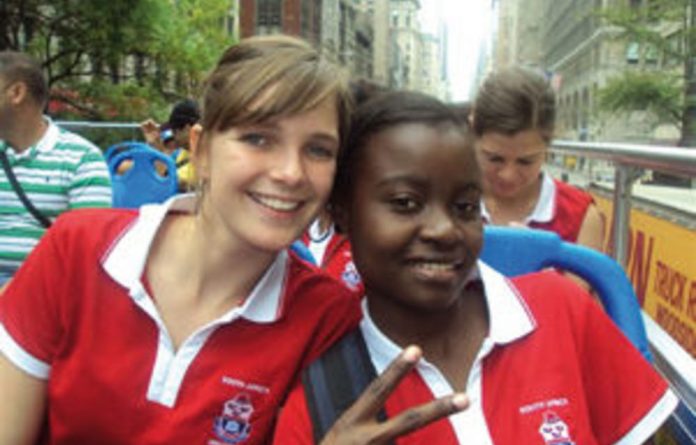 The dream of an integrated and transformed University of the Free State (UFS) is vivid for first-year students who recently returned from the United States, where they visited campuses to learn about transformation, leadership and diversity.

Seventy-one UFS first-years were selected for the mentoring initiative, the Student Leadership Development Programme. They spent two weeks in subdivided groups at New York University, Appalachian State University, Cornell University, Binghamton University, University of Minnesota, College of the Holy Cross, University of Massachusetts, Mount Holyoke and Cleveland State University. The students, in groups of eight to 10, attended programmes tailored for them based on their personality profiles and leadership experience.

That was the first stage of the programme. When they become second- years next year, the next step will kick in — they will mentor 2011’s first-year students, developing leadership programmes for them and running volunteer programmes in residences and elsewhere in campus life.

The Mail & Guardian spoke again to several students it interviewed in September before they flew to the US. All agreed that their “amazing experiences” had opened their eyes to diverse campus lifestyles.

“It was life-changing,” said Nandi Bester, whose BA is in politicl transformation and governance. “I can say with confidence that I’ve come back to South Africa and Kovsies [UFS] as a proud leader and share in [UFS vice-chancellor] Prof [Jonathan] Jansen’s dream for the university. I believe it is not impossible and I’m willing to put my heart into making that dream a reality.”

Some have already started working in their residences on how to make 2011 one that includes all new students equally.

“I have begun working closely with some of my seniors on strategies for welcoming the 2011 first-year group,” said Tshepiso Motlolometsi, a BSc (behaviour genetics) student.

He said they would use their own experiences of UFS to give the new students a sense of what they could expect. “We have come up with ideas to welcome them into the residences and to encourage them to be active university students.”

BCom student Sibusiso Tshabalala said the 71 would assist the UFS’ student affairs and development department with a “Get Success Week” at the start of the 2011 academic year. This is a programme in which the 71 students will mentor first-years during their orientation week.

One of the group’s key objectives was to be “cohorts for change” at UFS, Tshabalala said. With that in mind, the group had encouraged the strong leaders among them to serve on faculty bodies, student associations and residence committees.

“The plan here is to ensure that the leaders make valid contributions wherever they serve. Innovative leadership is also important — several groups aim to have a dialogue that focuses on ‘stereotype reduction’ targeted at first-year students,” Tshabalala said.

Visiting the US made the students realise that integration at UFS should be student-driven, he said. “As a group our aim is to drive integration in residences and focus on the importance of transformation.”

BCom student Lerato Tala saw enlightening contrasts between UFS and New York University (NYU), which she visited. NYU had much smaller classes and the diversity of students was apparent at a glance, she said.

“NYU consists of people from all parts of the world and it is therefore more diverse in culture, religion, race and sexual orientation. They have more student organisations and support groups that encourage students to stand up for what they believe in,” the accounting student said.

Lehlohonolo Mofokeng said he was at Cornell University, where students were not as race-conscious as at UFS and they associated with each other more freely. “They even date people from different groups,” the BEd student said.

“And unlike here in South Africa where we are xenophobic towards our own people”, international students at Cornell were treated with respect, Mofokeng said.

“The Cornell community is so willing to help one another in all aspects, whether it’s academic or just giving a lost person directions.”

For Ncebakazi Luthuli, the most striking difference was how the students at the University of Minnesota owned the campus and had pride in their university.

“Everywhere we went we could see students clad in University of Minnesota gear, regardless of colour or culture. In our university we tend to be more loyal to our respective residences than we are to the university as a whole,” Luthuli said.

During their US trip, several of the 71 UFS students sent the M&G diaries of their impressions. Read them here