What Julius told the Americans 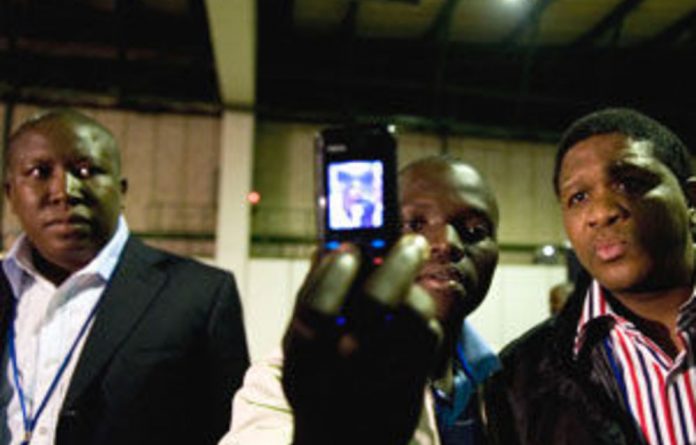 Julius Malema, the ANC Youth League president, reminded Fikile Mbalula, his ally, a former youth league leader and now sport and recreation minister, on which side his bread was buttered when Mbalula wanted to withhold support for Jacob Zuma during his rape trial in 2007.

In a United States embassy cable released by WikiLeaks this week, Malema is quoted as telling US diplomats during a visit they paid to Limpopo that “he [Malema] also hinted that Fikile was told his position depended on his support of Zuma”.

Mbalula was then the league president and Malema was the league’s Limpopo secretary.

The South African government this week declined to comment on the leaks, but officials said privately it wanted WikiLeaks to be shut down.

“Our preference is that this thing must be shut down. There are powerful people in this country that are worried. You just don’t know what is next,” a highly placed government source said.

‘Crazy old man’
Maite Nkoana-Mashabane, the minister of international relations and cooperation, is reportedly unhappy about being quoted as saying that Zimbabwean President Robert Mugabe was a “crazy old man”. “She knows it is a view that not many people will disagree with, but she doesn’t want to be the one quoted on it,” a source said.

The exchange between Malema and US embassy staff is said to have taken place when a US embassy political officer and political assistant visited Limpopo to assess the build-up to the ANC’s Polokwane congress in 2007.

“Malema admitted that ANCYL president Fikile Mbalula did not want to support Zuma during the rape trial but that the regional [Limpopo] leadership insisted, arguing that if the youth league defended Zuma on corruption charges, they could defend him on rape charges, since both acts are immoral,” the leaked cable reveals.

Malema, described by US officials as “frank and friendly”, also dismissed Tokyo Sexwale, now the minister of human settlements, as a spent force as far as the 2007 contest was concerned, saying he had missed his opportunity.

Malema defended Sexwale’s business interests, saying he was not a capitalist “because he only owns shares of companies, not actual means of production”.
Malema confirmed that Zuma was being propelled towards the ANC presidency by a wave of sympathy sparked by the perception that Mbeki had given him a raw deal. He might not have been picked as a candidate “if Mbeki hadn’t gone after him”. Zuma was “a victim of a conspiracy similar to what would happen in American politics”, Malema said.

‘Brilliant’ Motlanthe
But the youth league had begun lobbying behind the scenes for ANC deputy president Kgalema Motlanthe to become South Africa’s next president if Zuma ended up in jail.

“However, he added that, although “Motlanthe is brilliant, you can’t understand anything he says”, the cable reports.

The cable makes it clear that the Americans considered Malema “a force in South African politics”.

In a separate cable in November last year, also posted on WikiLeaks, US diplomats examined the reasons for Malema’s political strength and extensive media coverage.
“He was the most vocal member of the ruling party during the ANC’s 2009 national election campaign, and his public presence does not seem to be waning now that the new government is in place.

“It has never been adequately answered whether Malema speaks on his own or with backing from senior leaders of the party. Regardless of whether his views are sanctioned, however, it is becoming clearer that President Jacob Zuma respects Malema and his place within the movement.”

Results
The Americans noted Malema had visited Standerton to investigate service delivery protests and that after he had met residents and provincial and municipal officials, several municipal officials of the Lekwa municipality, including the mayor, had been fired.

When the Mail & Guardian approached Mbalula for comment, he said it was the first he had heard of the allegations that he was persuaded to support Zuma during the rape trial.

“I don’t know why Julius would say that to the Americans. There were two Americans who wanted to interview me about Polokwane but I refused.

“My support for President Zuma was never in doubt. I was very clear that I knew that he was being set up.”

Mbalula said he remembered a national executive council meeting of the youth league at which Zuma’s rape trial was discussed and Malema was vocal about the need to support Zuma. “He said if we don’t support President Zuma on the rape trial it meant we should also retract our support on corruption charges,” Mbalula said.

He also defended Mbalula’s position on Zuma. “There was never a point when Mbalula doubted our support for Zuma. All of us supported Zuma. Those Americans should not involve me in their issues.”

US assistant secretary of state for African affairs Johnnie Carson told reporters on Thursday that the WikiLeaks relevations do not “represent the totality of interests the US has in Africa.” He said, “The depth, strength and character of our relations with Africa will continue.” — Additional reporting by Lionel Faull