Why boxing is a hit with women 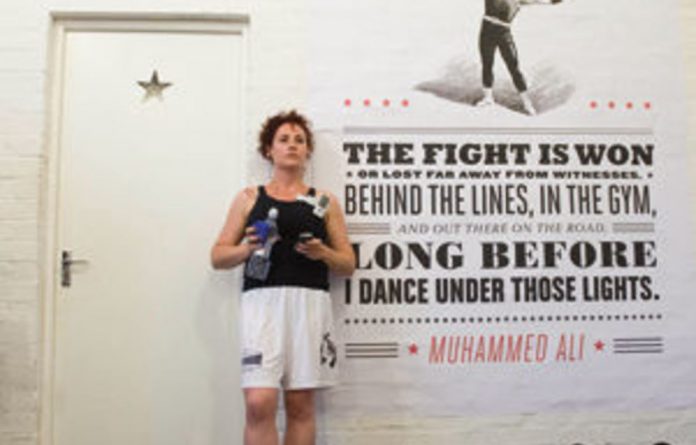 “Get used to it. It’s a man’s sport,” Shayvonne Pattison said to me, when I asked her to stop hitting me quite so hard in the head.

Pattison — more than a decade younger than me and several kilos lighter — was training for an upcoming professional bout (on Tuesday night, she fought Rita Mwrebi at Emperor’s Palace, losing on a split decision).

I was getting some much-needed sparring experience before I fought in two “white collar” boxing matches, one in Jo’burg the other in Cape Town.

The term “white collar boxing” originated in New York in the 1990s, where men (and women), mostly from professional backgrounds and with little or no boxing experience, would train to fight in a public boxing match.

Yuppie boxing, I call it. Fight Club, but without Brad Pitt. And you’re allowed to Twitter about it.

White collar bouts are guided by pretty much the same rules and regulations as formal amateur bouts: no low blows, or shots to the back of the head; participants have to wear safety gear (headgear and gum shields, groin protectors for men, breast guards for women and heavier gloves to limit the damage inflicted by punches); but there are only three rounds per fight, and the rounds are shorter — two minutes instead of three. Participants get a full minute between rounds, instead of 30 seconds.

The fights are generally “no decision” bouts, in which there are no points awarded and no winner is announced. The idea is that everyone wins just by taking part. But the crowd (and the boxers) generally know who’s won and who’s been beaten.

I’d been waiting for a fight since my buddy and training partner, James Sey, competed in one in July.

The challenge
Finding female opponents was something of a challenge. It was even harder to find women to spar with and I was exceptionally lucky to have a few rounds with Pattison. If that’s what you call luck.

The first time I sparred with Pattison, I was left with a tender jaw and a neck that felt like it had been in a car accident. That’s when I asked her to pull her head shots. “Body shots are free, right?” she checked. I came out of our next session with a fist-sized bruise on my left hip.

The last time we touched gloves, Pattison gave me a blood nose (good thing she was pulling her punches by then, or it could have been worse). It felt surprisingly good, though. I’d carried on fighting instead of stopping (the first few times I got hit in the nose, I’d needed more recovery time), and my nose hadn’t actually started bleeding until I’d finished the round and left the ring.

The week of my second fight I sent out a belated email to my insurance broker: “Does my medical aid cover this, in case I get injured?” (The answer: yes, unless I started getting paid to fight.) As it turned out, I emerged from both my fights with nothing more than a defensive bruise on my left arm and a nose that hurt when I crinkled it.

“A lot of women find boxing empowering and when they train, they want to take it further,” said Tamzyn Botha of the Armoury Boxing Club in Cape Town (where my second white collar bout was held). “What’s funny is the apprehension from the men. It still makes them uncomfortable, to see women fighting. It actually pisses me off.”

While there’s no evidence that women’s boxing is any more dangerous than men’s — reports from AIBA, the international boxing association, found that “Olympic style [they prefer not to use the term ‘amateur’] boxing ranks high among all sports for safety” — it’s a sport that still encounters resistance.

Women’s amateur boxing has been unbanned in many countries only since the mid-1990s. But there are increasing numbers of women who are interested in taking up boxing as a sport, training in old-fashioned boxing gyms rather than the hybrid boxercise classes on offer at conventional fitness chains.

Botha said that in the 10 months the Armoury Boxing Club had been open its female membership had grown from about 10% to nearly half of the people training there.

“It helps having a woman — me — working at the gym. Walking into a boxing gym is terrifying for a man, so you can imagine what it’s like for a woman. From a business point of view, we also market the club in a certain way. We work hard to break down the brutal perception of boxing.”

‘Fight Night’
At last week’s “Fight Night”, the Armoury featured two women’s fights on the bill (including mine), watched by close to 500 people.

“Boxing has become more popular because people have stressful lives, and getting fit training like a boxer combats that. I also hear a lot of people telling me they can’t go to a regular gym anymore because they feel like hamsters on treadmills. They’re looking for more mindful exercise. And they want to learn new skills.”

In August last year, the sport received a massive boost when it was announced that the International Olympic Committee had approved the inclusion of women’s boxing in the 2012 London Olympics, with one of the men’s weight classes dropped to make room for women fighting at flyweight (48kg-51kg), lightweight (56kg-60kg) and middleweight (69kg-75kg).

“It’s critical that we take women over there,” said South African Olympic Committee (Sascoc) vice-president Hajera Kajee, “but we have to keep in mind there are other countries that are much stronger, that have women who are already ranked internationally. Our women need a lot more international exposure.” South Africa also needs more female boxers, full stop.

“If I said it was growing in leaps and bounds I’d be lying,” said Barries Barnard, the president of the South African National Boxing Organisation (Sanabo).

“If there’s someone driving women’s boxing in a particular area, then it’s very popular. In certain provinces it’s well supported, particularly in Limpopo, KwaZulu-Natal and the Eastern Cape. But there’s still some resistance to change, a sense that women don’t box.” Fewer than 100 women are registered with Sanabo, although Barnard said there were many who were training but not formally registered.

Amateur boxers
The programme, in which selected men and women are absorbed into the defence force, aims to ensure that talented amateur fighters get as much support and training as possible before 2012. Given that amateur boxers often struggle to support themselves financially while keeping up the intensive training routine required, it’s a smart move. But not one that is likely to yield any women’s medals for South Africa — yet.

“We’ve got some good boxers,” said Barnard, “but compared to the girls who compete in the international arena, who fought at the world championships—” The number of countries competing in this year’s AIBA women’s world boxing championship grew by almost 80% from 2008, all because of the Olympic announcement.

“We could do it in 2012,” Barnard said, “but only in a very exceptional case. If a lady came from the front. You also have to remember that there are only three weight divisions for women boxers at the games, so it’s much tougher for them to qualify. In men’s boxing, there will be 250-odd boxers. There will only be 36 women.”

Barnard’s next move is to find funding for the South African women’s championships, which will be held in March, and to get female fighters ready “by the next Commonwealth Games and the Youth Olympics”.