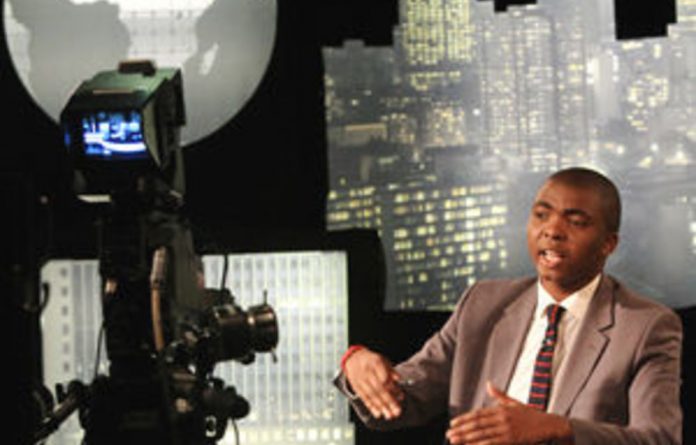 How many comedians does it take to create a light bulb moment? Four. Or maybe it’s six. It all depends on who’s making a guest appearance on Late Nite News with Loyiso Gola.

The weekly satirical news show, which launched on eTV at the end of September and normally airs on Wednesday nights at 9:30, is a surprising hit with audiences and critics.

It drew more than 1,1-million viewers by early December, according to the station.

Besides Gola, the show’s anchor, Late Nite News features Kagiso Lediga, Riaad Moosa, David Kibuuka and “as many other comedians as possible. It’s a team effort,” says Lediga, who, with Gola and producer Tamsin Andersson, launched the show.

“Loyiso is the driver, but we really wanted to open up the show, invite people to come and be a corrupt official, a striking teacher, a liberal white dude —”

There are sock puppets too.

A healthy democracy
Humour’s always been a barometer of a healthy democracy (how many jokes do you know about Burma?), but when Late Nite News was launched, the signs for either weren’t promising — President Jacob Zuma was (and is) suing Zapiro over a cartoon, the ANC Youth League wanted to take down Twitter and debate has continued to swirl over the proposed media ­tribunal.

But if Carte Blanche’s depressingly worthy take on living in South Africa is enough to make people want to emigrate, then Late Nite News is the programme that might just make them want to stay — imperfect, but really funny.

It has created a space where Gola could talk about author Annelie Botes and say things like, “I’m not too comfortable with this open racism.

I prefer it when white people talk behind our backs”; then switch to a green screen insert with “foreign correspondent” David Kibuuka — “How’s North Korea, Dave?” “It’s shit” — and manage to make other countries’ problems seem both relevant and worse, or at least funnier, than our own.

“We always wanted to do a show like this,” says Lediga. “We never thought [the channel] would buy into it. But we shot a pilot and they went for it.”

Andrew Wessels, the show’s director, says: “To be completely honest, I’m not entirely sure why it’s taken off the way it has. I think it’s just the right time for this type of parody.”

Says Lediga: “With the whole media tribunal thing, a lot of freedoms were potentially getting curbed. A show like this gives us a sense that we can still talk about things; that we haven’t been ­censored.”

Wessels agrees: “It helps that the TV channel has encouraged us to go as wild as we possibly can. It’s allowed us to get gritty.”

Back and forth
Lediga, who’s also the show’s executive producer, calls it a “back and forth thing. We brainstorm the script on Friday and Saturday, [and] by Sunday we have a final version,” he says. “We shoot all day Monday, spend the whole night editing, leave at 6am and sleep through the next day.

The script sort of gets looked at before [by the station] to check for red flags. But they’ve never said ‘don’t say that’.

And, says Gola, they often censor themselves: “Not because of the channel, but because we want to discuss what’s relevant. We debated what to do about Steve Hofmeyr, for example. And we realised that even if we made fun of him we’d just be driving his cause. It was ridiculous what he said but it wasn’t big enough to hold our attention.”

But the Brett Kebble murder did, during the recent trial of accused Glenn Agliotti.

“Why do white people never go to jail?” Gola mused. “I mean, Glenn Agliotti, Bad Brad —” Someone from the floor speaks out: “Brad’s in prison now, Loy.” Gola looks past the lights, pauses, replies: “Ag, he’ll get off.”

But the team have more immediate concerns on a particular morning — their past three reports have all been about white people (asylum-seeker Brandon Huntley, Botes and Agliotti) and Gola’s pulled off a smooth line about having eaten two white people for breakfast. There’s debate about whether it will antagonise white viewers.

Thin line
After Moosa was charged with hate speech by the Broadcasting Complaints Commission of South Africa for using the word “coolie” on a local radio station, race — and the thin line between funny and not-so-funny is something all the comedians are well aware of.

Lediga consults Wessels via his headset and they decide to drop part of Gola’s brilliant improvisation about white people in prison and whether or not “assisted” crimes can be used as a means of getting off (“It wasn’t a robbery,” he monologues, “it was an assisted robbery—”).

Lediga continues scrolling through the rest of the script on his iPad.

Behind the scenes it is surprisingly serious work. Between 12 and 15 writers and researchers work on each episode, sifting through it and preparing content, briefing the presenters.

“We’re making fun of real facts,” Lediga says, “and that means we have to know what’s going on.”

The perfect one-liner can also demand five, 10, 15 takes. Remarkably, the only onlooker who doesn’t laugh out loud spontaneously (even after the fifth take) is the model of a skeleton, casually dressed in a beret and red bikini briefs.

Gola says that he wants the show to “be a catalyst for debate”. “I want people to start questioning things more. We want them to look at situations in an objective way – not to have a fixed stance on politics. Humour is an effective way to get the point across. You can hide it if you’re scared. But you can’t hide laughter.”