Should I get a swastika tattoo? 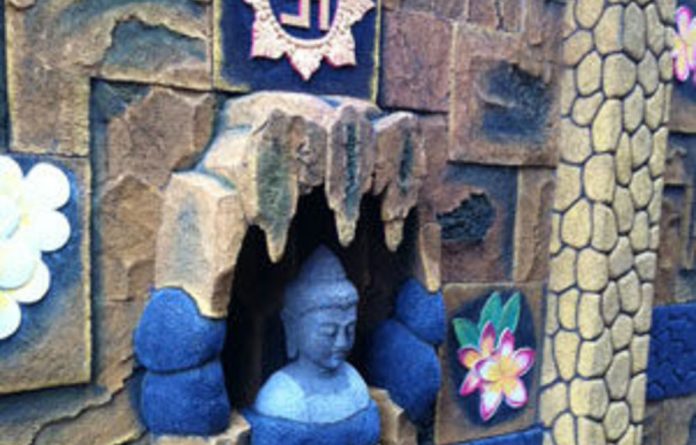 It’s a question you’ve probably often asked yourself, while idly travelling through foreign climes: should I get myself a nice swastika tattoo? And in some ways, it’s a tough one to answer. It rather depends which foreign climes.

If you’re holidaying in sunny Germany, well, the answer is no. They’re illegal there, I believe, something to do with what my ex-students at UWC used to call “the so-called Second World War of the British”. And if you’re on one of those famous body cavity package tours of the United Security Checks of America, then no, not a good idea either. Too many skinhead pinyinheads* holed up in the mountains with weapons of mass constitutional destruction, they tell me. You wouldn’t want to risk being confused with that lot.

But in a Buddhist, Jainist or Hindu country, territory or mind space, this question takes on a complicated tinge. In Bali, for example, the Indonesian island on which I’m writing this column, there are swastikas on many buildings, and it is, of course, a near-universal symbol that’s been around since at least Neolithic times. I was prompted to write this column by the shock I got when I turned a street corner and was confronted by a swastika, and there is a photo of the building that spooked me on the top right-hand side of this page.

Let me just make it clear at the outset, to forestall any burgeoning outrage that might spoil your enjoyment of this column (and also those angry emails that get fired off before readers bother reading conclusions), that my column’s answer to this question will be, no, you shouldn’t get that nice swastika tattoo. Because there is no such thing as a nice swastika tattoo.

Most of you will have instinctively known that, of course. But it’s instructive to recreate the thought process that one should go through before making that decision.

Naff idea
Of course, getting a religious symbol tattooed on your body is a naff idea anyway, unless you really are committed to that religion and the marketing thereof. Some of our sports people spring to mind (nice pun there, by the way), especially the idiot swimmer who has a Springbok tattoo when our sporting symbol is a Protea.

But in the greater scheme of things, do Westerners really have the right to impose general opprobrium on a symbol that’s belonged to centuries of Asian symbolism, based on the decade or so of an evil bastard’s truncated 1 000-year Reich? It seems like the only battle that Hitler has actually won is one where vestigial colonialism still controls the allowable semiotics of popular culture.

It must be this way for the foreseeable future, or at least the bit I can foresee (which unfortunately isn’t much further then your next surf when you’re on holiday in Bali). The Holocaust, and the many other atrocities committed under the banner of the Hooked Cross, necessitate that. But one can’t help wondering when, or perhaps if, the world will see a cuspoidal moment for the swastika (sorry, the phrase “tipping point” has been leached of all currency) analogous to the one that freed up “nigger” to be once again available for certain practitioners of popular culture to reinsert it into polite discourse. Did I just call hip-hop polite? Wow — another dead outsider genre.

I don’t ask this question for abstract reasons, but because there are many symbols in South Africa that still await liberation, the Springbok being one of them. So no, don’t get that swastika tattoo, in the same spirit that prompted young Shanaaz “Nazi” Ismail, of the Western Cape, to change her “Nazi – WP” number plate when Jewish people pointed out how insensitive it was.

But do keep thinking about who owns what words mean, and how long we can own that for in the face of the demands of other cultures, classes, genders and religions.

*Note to those not fluent in Mandarin or Wikipedia: “Pinyinheads” is correct. It’s a pun on pinhead and pinyin, the Chinese term for a swastika.